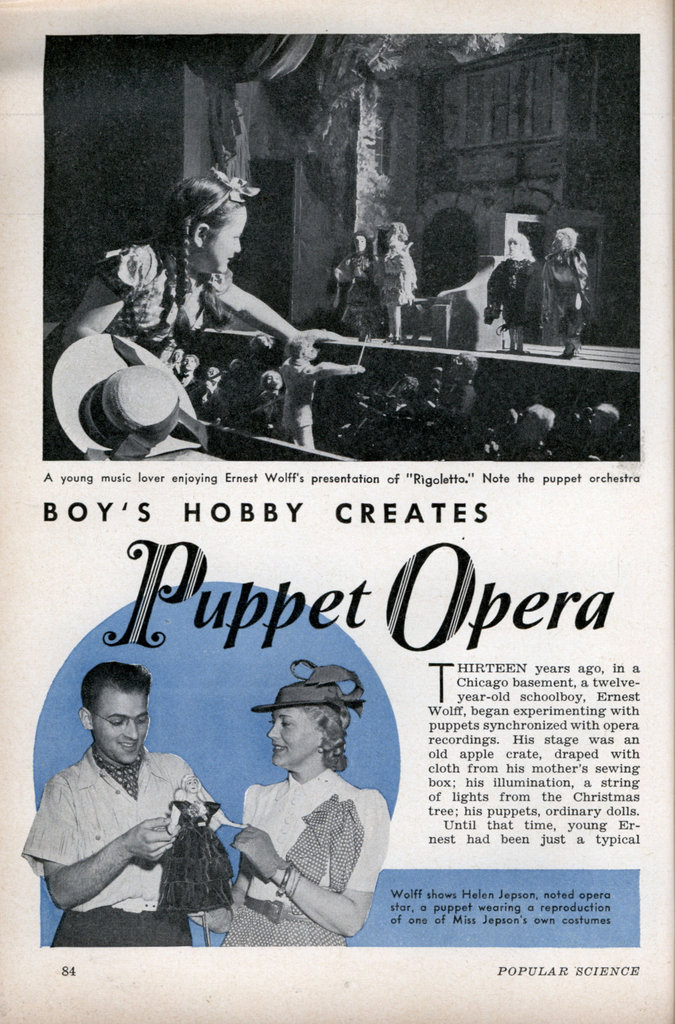 By Arthur A. Stuart

THIRTEEN years ago, in a Chicago basement, a twelve-year-old schoolboy, Ernest Wolff, began experimenting with puppets synchronized with opera recordings. His stage was an old apple crate, draped with cloth from his mother’s sewing box; his illumination, a string of lights from the Christmas tree; his puppets, ordinary dolls. Until that time, young Ernest had been just a typical American boy, with a boy’s disdain for anything that smacked of “high art.” However, a visit to an opera in Europe gave him a strange jolt. The presentation was “Carmen.” He was thrilled not only with the music, but with the elaborate lighting and staging. When he got back to Chicago he went to every performance of “Carmen” he could manage to see, getting in some way when he couldn’t raise the money to pay.

Opera soon began to saturate his living. In his spare time he studied the lives of composers and artists, hummed tunes, made sketches of scenery and costumes he had seen at the Chicago Civic Opera. It was his ambition to devise a means to bring some of the thrill of grand opera to his friends, and to other music lovers who could not afford to attend a real performance by living singers.

The apple-box stage, with its crude scenery, puppets, and lighting, was the beginning. At first, just a few friends were invited to witness the performances. Soon, however, the news spread, and neighbors and friends were flocking down into his basement “opera house” in such numbers that he had to charge a small admission fee to hold back the crowds!

With these fees, and every other cent he could save, Ernest Wolff kept building and rebuilding his miniature operas, aiming each time to come nearer the smooth perfection of a real opera. Finally outgrowing his basement auditorium, he built a portable outfit and gave performances before women’s clubs and

music societies throughout Chicago. Today, the twenty-five-year-old impresario is showing his miniature operas before music lovers in cities from New York to San Francisco, with no let-up in sight for future engagements.

Designed entirely by Wolff, and built largely by him and his company of assistants, the present opera equipment is a triumph of miniature stagecraft. Believing that the frivolousness of the average puppet show is out of place in a serious opera, he has striven for realism throughout.

The cast consists of nearly 200 thirteen-inch puppet opera stars, with a wardrobe of 300 hand-sewn miniature costumes, each authentic in every detail. To produce this huge cast, Wolff first modeled two standard heads in clayâ€”one of a man, and the other a woman. From these models, wooden heads were turned out wholesale on a carving machine. The wooden heads were then given individual character by appropriate painting and wigs. Bodies were made for the puppets by means of wire and padding.

To permit the amazing scenic and lighting effects of a real opera production, ordinary marionettes worked by strings were out of the question. Stringed puppets could not go through gates and doorways; an overhead puppeteers’ loft would interfere with lights and scenery. A mechanism therefore had to be devised whereby the puppets could be operated realistically from beneath the stage. The problem was finally solved by having stiff wires, extending down through the body, work the arms and head, the puppets moving about along paths formed by a series of slots cut in the stage.

The stage properties, most of which were made by hand, include three complete suits of period furniture, spinning wheels, tables, chairs, fireplaces, vases, candlesticks, silverware, jewel boxes, couches, lanterns, chandeliers, donkey carts, and many other pieces.

A chandelier used in “La Traviata” was constructed from 3,000 crystals, and another for “Rigoletto” was made of brass and consists of sixty candelabra. In “Carmen,” the soldiers’ helmets are made of brass and fashioned entirely by hand. The felt hats in “Faust” were blocked on specially carved miniature wood hat blocks.

In this opera, “Faust,” occur a few amazing tricks of puppetry. Mephistopheles, the devil, is made to appear and disappear out of sudden gusts of thin white vapors. Within sight of the audience, the old, white-bearded Faust is transformed suddenly into the young, dashing, beardless suitor of the beautiful Marguerite. The substitution is really adept sleight-of-hand, aided by a trapdoor in the stage, while the gusts of “white vapors” are puffs of tobacco smoke, blown up through a slot in the stage by one of the puppeteers!

All the settings used in the puppet operas are adaptations of scenery used by the La Seala Opera of Milan, Italy, the Metropolitan Opera of New York, and the Chicago Civic Opera Company. To add to the realism, a twenty-one-piece puppet orchestra begins tuning up its fiddles before each act. A frowzy-haired puppet conductor, known intimately as “Toscanini,” then appears, takes a bow, and proceeds to lead his orchestra in a beautiful overture.

This realism extends to every piece of back-stage equipment. Scenery consists of regulation “flats,” “drops,” and “borders,” with a blue cyclorama encircling the back of the stage. Flats are fastened to the forty-eight square feet of stage space with miniature stage braces. When scenes are shifted, drops that must be gotten out of the way are hoisted into a regular fly loft overhead. Specially built miniature spotlights and floodlights are all under the control of an elaborate switchboard.

The stage was constructed for extreme mobility, without a single nail or screw. By removing a few hooks, nuts, and wedges, the entire 3,000-pound structure can be dismantled and made ready for shipment by truck in about half an hour.

Holding for himself the title of producer and director, Ernest Wolff now has eight assistants, including five puppeteers, an electrician, a sound man, and a business manager. Like himself, all his puppet operators are linguists and musicians. They learn every opera by heart, and try to express each nuance of word and musical movement through the motions of the tiny actors. Each opera requires a month of difficult rehearsing, during which Ernest sits out front, suggesting movements of puppets’ heads, hands, and legs, synchronized with the recorded music, while the puppeteers beneath the stage take notes.

Even the sound man, who shifts the phonograph records and watches over the reproducing equipment, is a musician, and works from a musical score. Sometimes well-known American operatic stars, such as Lily Pons, Helen Jepson, or Lawrence Tibbett, are cut into an opera to sing a famous aria. In each case, the sound man knows to a breath where the aria begins and ends on a record. Often the realism is so great, and the music so moving, that audiences have been known to rise after an aria, shouting “Bravo! Bravo!” and refusing to quiet down until the puppet gave an encore!

In the course of his cross-country tour, combined with special engagements of longer duration, Wolff has exhibited his puppet operas to more than a quarter of a million people. Musicians and educators have acclaimed his work for its value in spreading the appreciation of operatic music. And, he has brought a new experience into the lives of thousands who would never have set foot inside a great opera house.