Behold! The most dreadful of Primeval Monsters, the Holstein Cow! 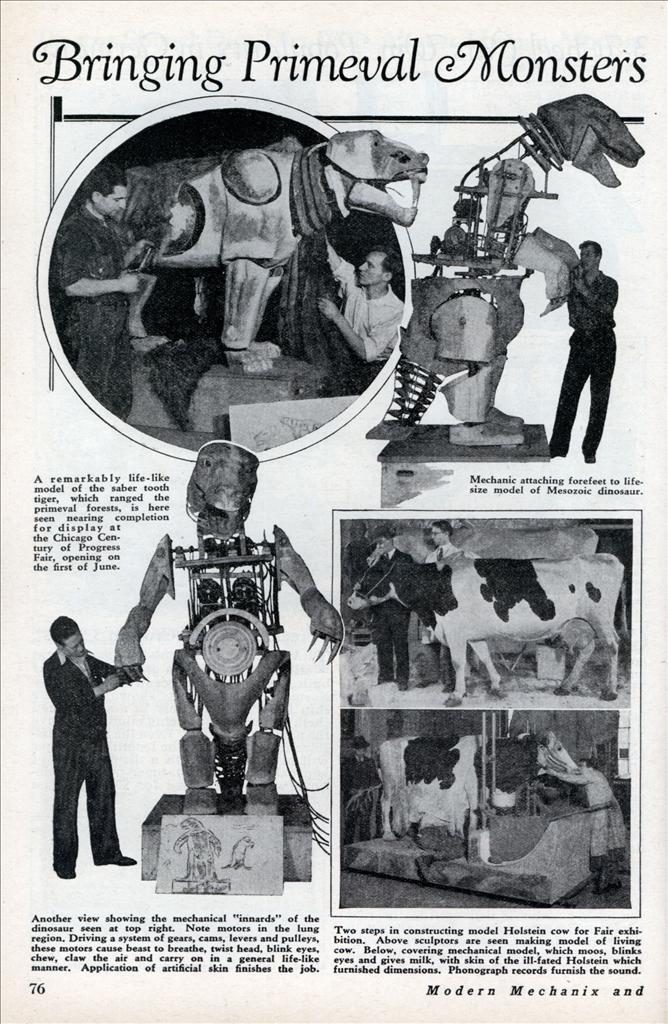 A remarkably life-like model of the saber tooth tiger, which ranged the primeval forests, is here seen nearing completion for display at the Chicago Century of Progress Fair, opening on the first of June.

Another view showing the mechanical “innards” of the dinosaur seen at top right. Note motors in the lung region. Driving a system of gears, cams, levers and pulleys, these motors cause beast to breathe, twist head, blink eyes, chew, claw the air and carry on in a general life-like manner. Application of artificial skin finishes the job.

The primeval grandaddy of all the gorillas reconstructed by mechanics and sculptors for Chicago Century of Progress. Intricate mechanism operated by battery of motors causes the brute to simulate movements of the living monster which once roved the prehistoric jungle, inspiring terror wherever it appeared. Visitors to the Fair understand fears of cave men when they watch the model breathe, blink its vicious eyes, open its mouth and emit ear splitting roars, and thrash the air as if in a fit of rage.

Above is seen a model of the shovel-snout pachyderm opening its huge mouth. Mechanism demonstrates how the beast sweeps up edibles onto the shovel-like extension on the lower jaw with its trunk. The belly of the model expands and contracts with lifelike breathing movements. At left is seen the huge hairy mammoth which will show Fair visitors what ice-age inhabitants of arctic regions looked like. Height of model is 14 feet, length of tusks, 11 feet.

Chicagoans were terrified one day to see this life-size reproduction of a dinosaur ambling down city streets on its way to the fair grounds. A creation of Messmore and Damon, 30-foot monster twists its reptilian neck and tail, breathes and chews anything you put into its giant mouth. All the mechanical monsters you see illustrated on this page may be seen on display at the Chicago Century of Progress Fair* Electric motors, radio, loudspeakers give illusion of life.