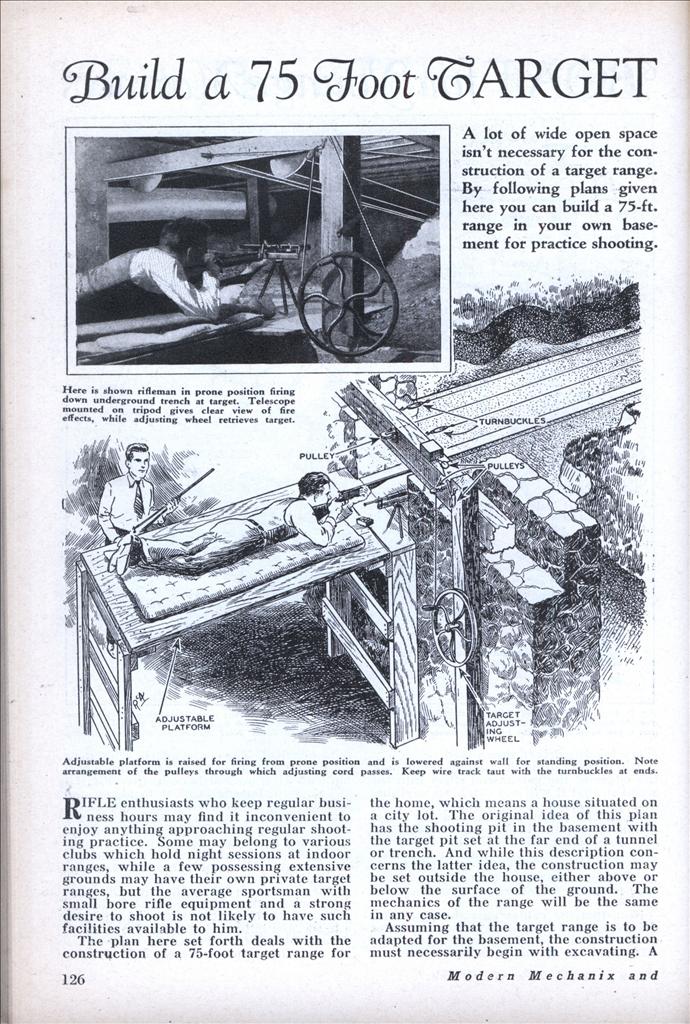 Build a 75 Foot TARGET RANGE in Your Basement

A lot of wide open space isn’t necessary for the construction of a target range. By following plans given here you can build a 75-ft. range in your own basement for practice shooting.

RIFLE enthusiasts who keep regular business hours may find it inconvenient to enjoy anything approaching regular shooting practice. Some may belong to various clubs which hold night sessions at indoor ranges, while a few possessing extensive grounds may have their own private target ranges, but the average sportsman with small bore rifle equipment and a strong desire to shoot is not likely to have such facilities available to him.

The plan here set forth deals with the construction of a 75-foot target range for the home, which means a house situated on a city lot. The original idea of this plan has the shooting pit in the basement with the target pit set at the far end of a tunnel or trench. And while this description concerns the latter idea, the construction may be set outside the house, either above or below the surface of the ground. The mechanics of the range will be the same in any case.

Assuming that the target range is to be adapted for the basement, the construction must necessarily begin with excavating. A trench 75 feet longâ€”plus 1-1/2 feet, the length of the target pitâ€”and approximately 2 feet deep and wide must be dug.

The greater length of this trench will, in all probability, be on the outside of the house, so excavation may be started more conveniently from the outside. Obviously, the foundation must be cut through. However, a rifleman with foresight may, when building a home, have this excavating done when the foundation is laid and thus save much time and effort.

‘Excavation Easy Job It may seem at first thought almost a prohibitive job to excavate below the house, but in most cases the ground floor of a house is from two to four feet above the level of the ground, so it may be accomplished without extreme difficulty. Moreover, it must be remembered that there will be but a fraction of the trench which cannot be dug from above.

Constructing the Target Pit The target pit is from one-half to a foot deeper than the trench but need be no wider; While the trench is boarded over and sodded, the target pit should have a movable top in order that it may be readily accessible.

A steel plate at least one-half an inch thick is set in the pit at a 45-degree angle in such a way that it will reflect flying lead downward. The pit is best lined with concrete or tile with a suitable drain beneath it, especially if the range is being constructed in a part of the country where rains are frequent.

The feature of this indoor shooting range is its convenience, and the remainder of this description may be adapted to almost any sort of range. The placing and retrieving of the target is accomplished entirely from the shooting pit.

Steel Wires Makes Target Carrier Tracks Two steel wiresâ€”No. 12 or 14â€”-seven inches apart are stretched near the roof of the trench from the target pit to the shooting pit, being tightened by turn buckles. On these wires rides a carriage constructed of 1/16 in. by 3/4 in. brass angles eight inches long and five inches wide. These brass angles are riveted together to form a rectangle which hangs from four ball-bearing sheaves that groove over the taut wires.

Midway and below the carriage on cup hooks hangs the wooden target frame, 12 in. by 14 in., suitable to hold regulation 25-yard targets, attached by thumb tacks.

At either end of the carriage are hooks to which a flexible steel cableâ€”or curtain cordâ€”is attached. At the target pit this cable goes around a stationary pulley and a movable pulley, after which it continues back along the roof of the trench to the shooting pit. There the cable goes through another stationary pulley and a moveable pulley and around a sewing machine wheel which has been lined with electrical rubber tape to keep the cable from slipping.

From the wheel the cable goes through another set of pulleys, after which it is attached to the target-carrying carriage. Thus the cable is continuous except for the space of the carriage, making it possible to move the carriage and target to and from the shooting pit by simply turning the wheel in one direction or the other.

Target illumination is furnished by two 50 to 100-watt lamps with white reflectors set in the sides of the trench just in front of the target pit, approximately three feet from the target. Metal conduits will make it possible and safe to have the switches at the shooting pit.

In the shooting pit an adjustable platform may be raised and lowered for prone or sitting position fire. A series of grooves will make almost any height convenient.

Description here has been sketchy, but the home target range presents an interesting case of adaptation for the man who likes to build things. It would be impossible in so brief an article to solve every problem of construction which individual cases may present, but all fundamental details are clearly set forth here.

For smaller boys who want to construct a basement rifle range, to shoot with air rifles, the matter is a much simpler one.

The first requisite is to get a clear shooting space of at least 25 feet, with a solid backing of some kind to stop the shots. A stone or brick wall, or even a wood or dirt backstop will serve. Hang up a piece of canvas or old carpet. In front of this build a wooden railing about 5 feet above the ground, wide enough to hold small objects, such as old plates, bottles, etc., which make excellent targets.

If a more formal target is desired, one of the leading manufacturers of air rifles has produced a target made of a small folding steel box, in which regulation target cards can be inserted. This steel target mounted on the railing as described will furnish many hours of keen competition for the young marksman. A drop light should be hung immediately over the target if natural light does not fall directly on it. After all, clear vision is the first element of good shooting.

A rail built as a gun rest, built where the shooters stand, will improve their skill, and add to their pleasure.