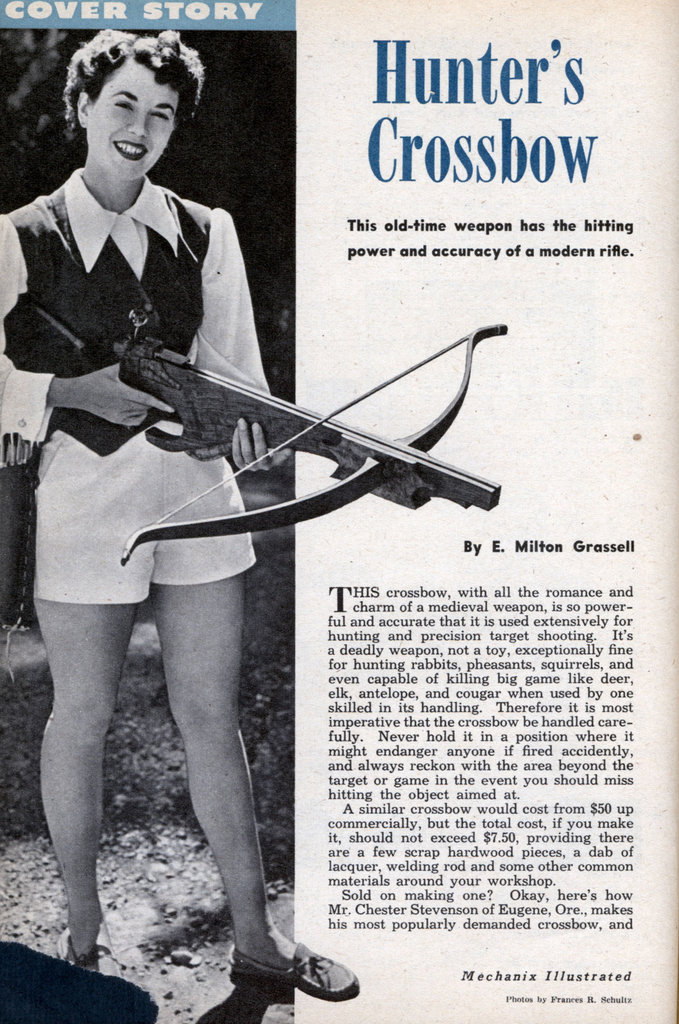 This old-time weapon has the hitting power and accuracy of a modern rifle.

THIS crossbow, with all the romance and charm of a medieval weapon, is so powerful and accurate that it is used extensively for hunting and precision target shooting. It’s a deadly weapon, not a toy, exceptionally fine for hunting rabbits, pheasants, squirrels, and even capable of killing big game like deer, elk, antelope, and cougar when used by one skilled in its handling. Therefore it is most imperative that the crossbow be handled carefully. Never hold it in a position where it might endanger anyone if fired accidently, and always reckon with the area beyond the target or game in the event you should miss hitting the object aimed at.

A similar crossbow would cost from $50 up commercially, but the total cost, if you make it, should not exceed $7.50, providing there are a few scrap hardwood pieces, a dab of lacquer, welding rod and some other common materials around your workshop.

Sold on making one? Okay, here’s how Mr. Chester Stevenson of Eugene, Ore., makes his most popularly demanded crossbow, and how you, too, can become a jet-age Robin Hood with this powerful weapon.

On crossbows, the “barrel” is included in the stock piece. If you don’t have a hardwood board about 1-1/2x8x36-in., glue scrap pieces together. This works just as well. In fact, the whole design can be modified, providing the draw (14-in. from the back of the bow to the trigger release latch) and the trigger unit are not altered. Follow the drawings and you’ll have no trouble making any parts of the crossbow.

After cutting the general contour, a recess is chiseled in the stock for the trigger assembly. Between this and the end of the barrel, make a kerf (a bolt groove) approximately 3/16×1/2-in. deep down the center. Sandpaper is used to make the 1/8in. chamfer on both edges of the bolt groove.

The unique trigger, modified by Mr. Stevenson, will fire the bolt with approximately the same finger pressure used to shoot an ordinary rifle, when the release latch is cocked with a 75-pound pressure.

The trigger guard, made from No. 16 gauge brass, 1/2×6-in., is bent and fastened with three No. 6 half-inch roundhead brass screws.

When hunting, you will probably aim along the bolt, but sights are preferable for target shooting. The peep sight shown in the photos, made from 1/2xlxl-in. brass scrap, is extremely precise, yet it can be made with three drills (1/64, 1/8 and 5/8-in.), a hacksaw and a file. It has both vertical and horizontal adjustments which are held with lock screws (see drawing).

The bow attachment assembly is the weakest part of the stock assembly. Therefore, two 3/8-in. thick strips are used to reinforce this area. You can machine the required combination screw-bolts, and the fancy knurled lock nuts, but it’s simpler to buy two closet screws from the neighborhood plumber.

There are two other parts to this unitâ€”a wedge-shaped block, and the bow lock plate, used to hold the bow securely in place.

The bow has two unusual features: (1) the 1/4x2x36-in. solid stave (either yew wood or osage orange), and the Fiberglas, when cut according to plan, requires no tillering, and’ (2) the reverse curve gives added speed. That’s the reason this crossbow has jet-like power.

Don’t let the steaming and reverse curve bending worry you. It’s really simple, as the photos show. You can make a steam pot from old brake drums and a piece of pipe, as shown in drawing. The strap metal bending jig is also easy to make.

Order several 5/16-in. straight 30-in. shafts. Since bolts are shorter than long bow arrows, these can be cut so as to make two bolts from each shaft.

If you purchase slip-over type points, no tenon is necessary on the shaft. This further simplifies bolt making.

Before fletching the shaft, finish it with dipping or brushing lacquer. Never use varnish on target bolts. Friction causes the shaft to heat when it penetrates straw targets and the varnish blisters.

Either right or left wing turkey feathers can be used, providing they are the same on any one arrow. The feathers can be trimmed with scissors. Place them in a fletching jig (these sell from $1.50 up with directions included) and glue them on the shaft with household cement. When fletching shafts with broadhead points, be sure the cock feather and the vertical surface of the broad-head are in the same plane. (See drawing.) The nock, customarily found on arrows, is not used on bolts. Nothing is done to the rear of the shaft. Before you load the crossbow with a bolt, try cocking it a few times, as shown in photo, until you have developed a real feel for the job.