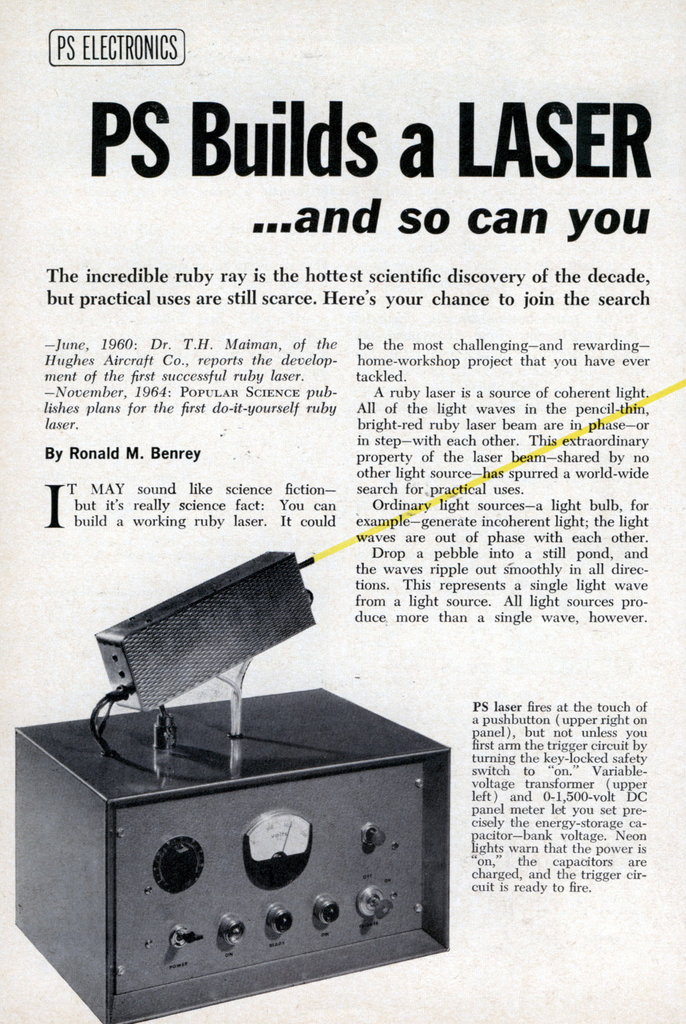 PS Builds a LASER …and so can you

The incredible ruby ray is the hottest scientific discovery of the decade, but practical uses are still scarce. Here’s your chance to join the search

IT MAY sound like science fictionâ€” but it’s really science fact: You can build a working ruby laser. It could be the most challengingâ€”and rewardingâ€” home-workshop project that you have ever tackled.

A ruby laser is a source of coherent light. All of the light waves in the pencil-thin, bright-red ruby laser beam are in phaseâ€”or in stepâ€”with each other. This extraordinary property of the laser beamâ€”shared by no other light sourceâ€”has spurred a world-wide search for practical uses.

Ordinary light sourcesâ€”a light bulb, for exampleâ€”generate incoherent light; the light waves are out of phase with each other.

Drop a pebble into a still pond, and the waves ripple out smoothly in all directions. This represents a single light wave from a light source. All light sources produce more than a single wave, however.

Suppose, though, you dropped your handful of pebbles one pebble at a time, each in exactly the same spot in the pond. The waves would continuously radiate from that point. All of the wave crests would be in phase. This is coherent radiation.

A ruby laser generates a coherent light beam by a similar process. Laser is an acronym for Light Amplification by Stimulated Emission of Radiation. Inside the ruby laser rodâ€”heart of the ruby laserâ€”excited atoms are stimulated to emit light waves in phase with each other.

A coherent beam can be focused to a needle-sharp spot with a simple lens system, concentrating the beam’s energy into a tiny area. Focused laser beams have seared holes in wooden blocks; burned holes in diamonds; performed delicate eye surgery by “welding” damaged retinas.

The PS laser won’t duplicate the feats of strength of large, powerful professional modelsâ€”but then, it costs only 1/50 as much. You can assemble the PS laser for a total cost of under $175.

What can it do? We’ve left that up to you. The PS laser is an open-end project: There is room for you to experiment, modify the basic design, and add your own ideas.

While developing the PS laser, we consulted Prof. Arthur Schawlow of Stanford University, coinventor (with Dr. C. H. Townes) of the maserâ€”a microwave amplifier that led directly to the laser’s discovery.

Inside the PS laser there is:

â€¢ A cigarette-size ruby laser rod cut from a single crystal of man-made ruby. Both end faces are ground parallel to each other and polished optically flat. One end face is coated with a totally reflecting mirror surface; the other with a partially transparent mirror surface. The best mirror surfaces are the multiple-layer dielectric type made by vacuum-depositing a sequence of thin layers of transparent material on the end faces. Constructive interference of light waves inside the layers makes the mirror reflect red light, but pass other color light. The layers are very expensive to apply, and amateur-quality ruby rods are usually supplied with silvered mirror surfaces. (See Dr. Sehawlow’s explanation of the ruby laser on another page.)

The flashtubes are wired across the capacitor bank, which is charged to 1,000 volts DC by the power supply. Pressing the “fire” pus