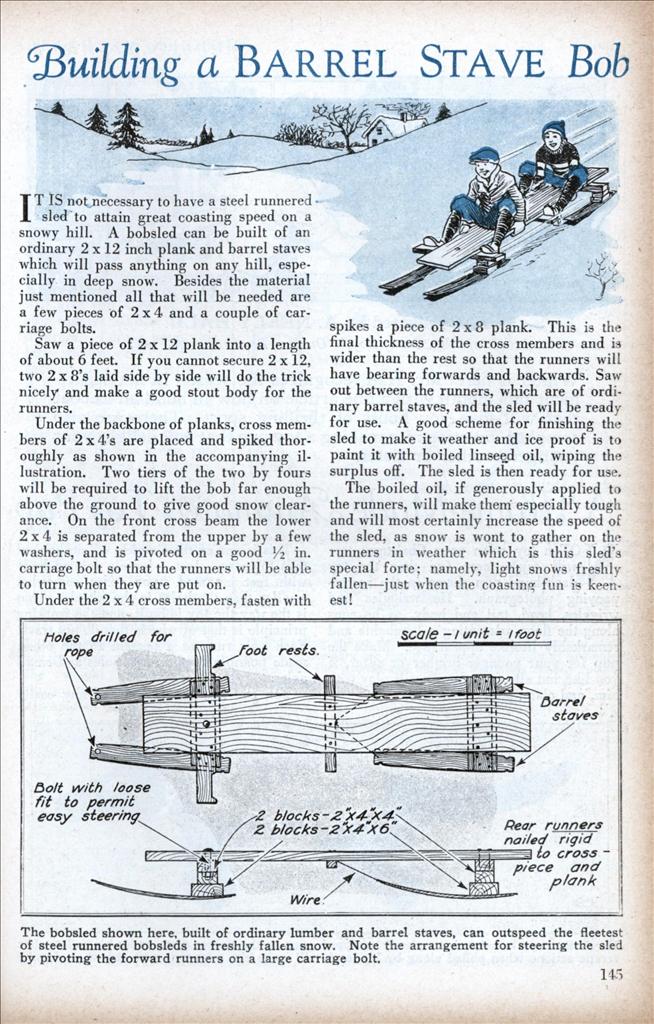 IT IS not necessary to have a steel runnered sled to attain great coasting speed on a snowy hill. A bobsled can be built of an ordinary 2×12 inch plank and barrel staves which will pass anything on any hill, especially in deep snow. Besides the material just mentioned all that will be needed are a few pieces of 2×4 and a couple of carriage bolts.

Under the backbone of planks, cross members of 2 x 4’s are placed and spiked thoroughly as shown in the accompanying illustration. Two tiers of the two by fours will be required to lift the bob far enough above the ground to give good snow clearance. On the front cross beam the lower 2 x 4 is separated from the upper by a few washers, and is pivoted on a good 1/2 in. carriage bolt so that the runners will be able to turn when they are put on.

Under the 2×4 cross members, fasten with spikes a piece of 2 x 8 plank. This is the final thickness of the cross members and is wider than the rest so that the runners will have bearing forwards and backwards. Saw out between the runners, which are of ordinary barrel staves, and the sled will be ready for use. A good scheme for finishing the sled to make it weather and ice proof is to paint it with boiled linseed oil, wiping the surplus off. The sled is then ready for use.

The boiled oil, if generously applied to the runners, will make them especially tough and will most certainly increase the speed of the sled, as snow is wont to gather on the runners in weather which is this sled’s special forte; namely, light snows freshly fallen—just when the coasting fun is keenest!