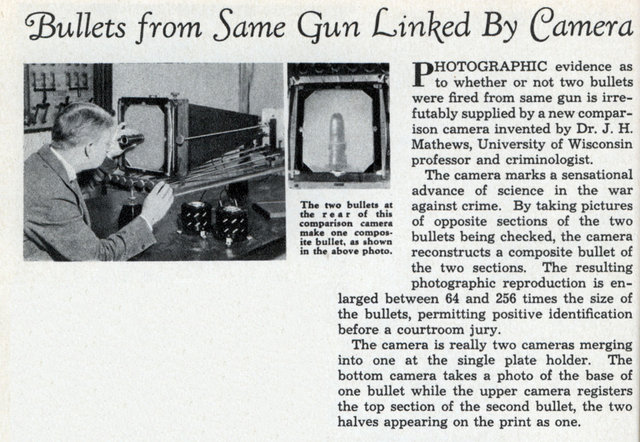 PHOTOGRAPHIC evidence as to whether or not two bullets were fired from same gun is irrefutably supplied by a new comparison camera invented by Dr. J. H. Mathews, University of Wisconsin professor and criminologist.

The camera marks a sensational advance of science in the war against crime. By taking pictures of opposite sections of the two bullets being checked, the camera reconstructs a composite bullet of the two sections. The resulting photographic reproduction is enlarged between 64 and 256 times the size of the bullets, permitting positive identification before a courtroom jury.

The camera is really two cameras merging into one at the single plate holder. The bottom camera takes a photo of the base of one bullet while the upper camera registers the top section of the second bullet, the two halves appearing on the print as one.