“but if you’re a smart shemale you’ll concentrate on your partner.” 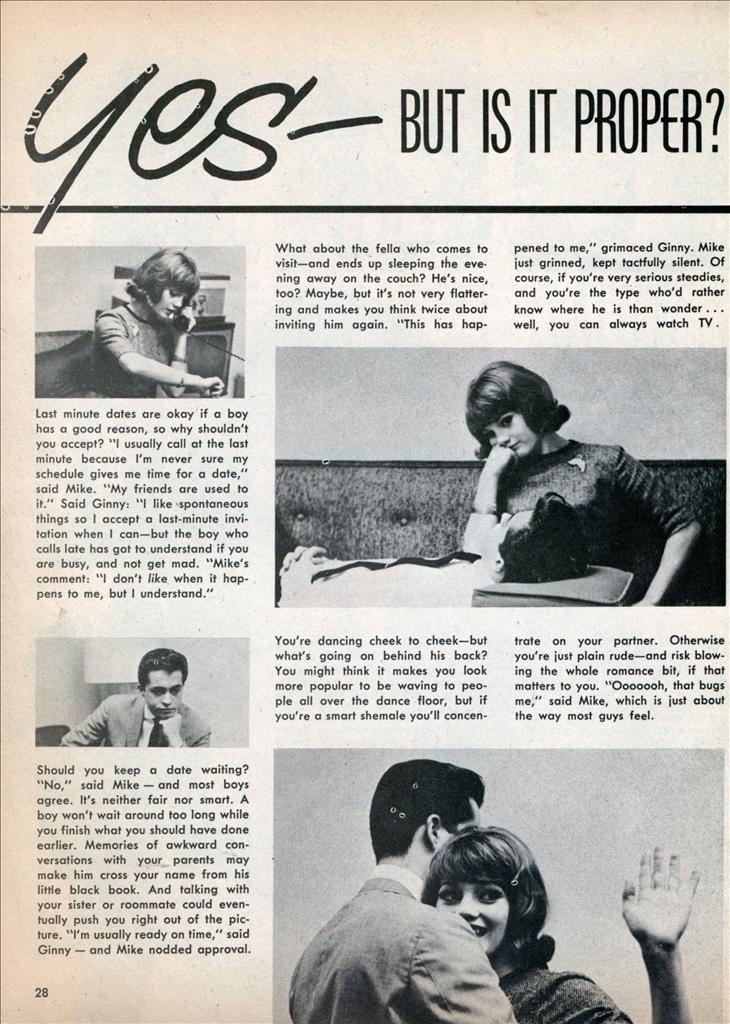 BUT IS IT PROPER?

GUYS AND GALS will always have gripes about each other, still the delicate art of dating survives. Singer Mike Clifford and dancer Ginny Shepard agreed to help illustrate some of the more common gripes, ones with which they’re familiar. Ginny is 19, a ballet student since she was five, a native of Connecticut who shares a Manhattan apartment with another dancer and dreams of doing her first Broadway show. Mike’s 19, a native of Los Angeles; he’s 5’11” tall, has light brown hair and hazel eyes, is a bug on cars (drives a yellow Lark convertible) and records for Columbia. He and Ginny date when their busy schedules allow it. Ginny likes people; prefers casual dates like movies, especially if you don’t know your date too well. “It’s harder to break the barrier on formal dates,” she says. “A sense of humor helps if the unexpected comes up.” Mike, too, likes movie-and-hot-dog dates, but feels obligated to see other entertainers in his free time. He likes to be mostly off in a corner and doesn’t dig girls who date him just to be seen. “I hate to be with a girl who goes out for herself,” he says. Ginny doesn’t fall into that category. •

Last minute dates are okay if a boy has a good reason, so why shouldn’t you accept? “I usually call at the last minute because I’m never sure my schedule gives me time for a date,” said Mike. “My friends are used to it.” Said Ginny: “I like ‘spontaneous things so I accept a last-minute invitation when I can—but the boy who calls late has got to understand if you are busy, and not get mad. “Mike’s comment: “I don’t like when it happens to me, but I understand.”

Should you keep a date waiting? “No,” said Mike — and most boys agree. It’s neither fair nor smart. A boy won’t wait around too long while you finish what you should have done earlier. Memories of awkward conversations with your parents may make him cross your name from his little black book. And talking with your sister or roommate could eventually push you right out of the picture. “I’m usually ready on time,” said Ginny — and Mike nodded approval.

What about the fella who comes to visit—and ends up sleeping the evening away on the couch? He’s nice, too? Maybe, but it’s not very flattering and makes you think twice about inviting him again. “This has happened to me,” grimaced Ginny. Mike just grinned, kept tactfully silent. Of course, if you’re very serious steadies, and you’re the type who’d rather know where he is than wonder . . . well, you can always watch TV.

You’re dancing cheek to cheek—but what’s going on behind his back? You might think it makes you look more popular to be waving to people all over the dance floor, but if you’re a smart shemale you’ll concentrate on your partner. Otherwise you’re just plain rude—and risk blowing the whole romance bit, if that matters to you. “Ooooooh, that bugs me,” said Mike, which is just about the way most guys feel.

If the phone rings while a date is visiting, answer it — or he’ll think you’ve lost more than one of your senses. But if your vision is 20-20 you’ll see how bugged your date gets if the call takes more than two minutes. It can be tempting if the phone caller is more important to you than Johnny-on-the-spot, but don’t give in. A bird in the hand . . .

It takes two to make a conversation, so if you’re feeling bored to death, think how he must feel. He asked for a date, so he’s interested in you. You accepted, so you must like him a little. So what if he’s not what you expected. You could be equally dis- appointing to him. There must be some subject that will make him come to life. Isn’t it a challenge to try and discover what it is? “The main thing is to enjoy yourself,” said Ginny, so if he looks like he’d rather be out with the boys, you’re both to blame.

Being a football hero might get him a date with you, but once you’re together you’ll soon wish he’d remember you’re on the same team. A guy can goof up an evening by throwing a block and tackle when it comes time to say good night. Grid tactics are fine on the field, but who wants to try and out-maneuver him in the hallway. If the fella’s trying to score, he’s going about it all wrong. You could call a penalty—and be all tied up the next time he phones.

Surprises are fine — providing they don’t make you uncomfortable on a date. “I thought you knew we were going to the Copa,” Mike kidded a slack-clad Ginny. It’s equally aggravating when you spend all day getting ready for a formal date—and then he tells you you’re going bowling! Strike? No, but the urge is almost overpowering!