Physical Culture
Issue: Mar, 1922
Posted in: Advertisements
Tags: exercise
2 Comments on Can a Man Be as Strong as a Lion? (Mar, 1922) 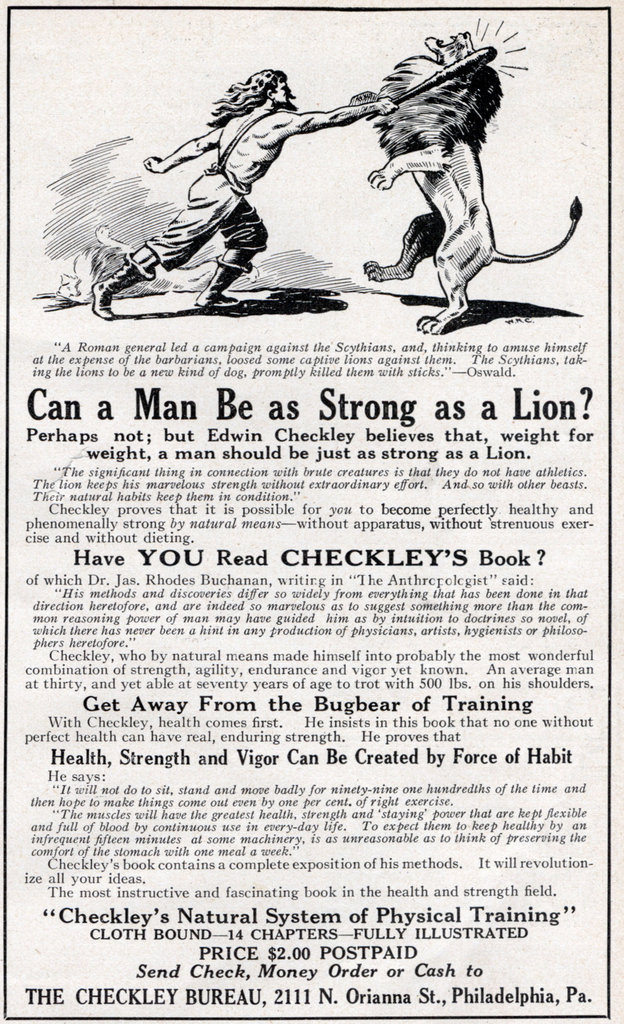 Can a Man Be as Strong as a Lion?

Perhaps not; but Edwin Checkley believes that, weight for weight, a man should be just as strong as a Lion.

“The significant thing in connection with brute creatures is that they do not have athletics. The lion keeps his marvelous strength without extraordinary effort. And so with other beasts. Their natural habits keep them in condition.”

Checkley proves that it is possible for you to become perfectly healthy and phenomenally strong by natural means—without apparatus, without strenuous exercise and without dieting.

Have YOU Read CHECKLEY’S Book?

of which Dr. Jas. Rhodes Buchanan, writing in “The Anthropologist” said: “His methods and discoveries differ so widely from everything that has been done in that direction heretofore, and are indeed so marvelous as to suggest something more than the common reasoning power of man may have guided him as by intuition to doctrines so novel, of which there has never been a hint in any production of physicians, artists, hygienists or philosophers heretofore.” Checkley, who by natural means made himself into probably the most wonderful combination of strength, agility, endurance and vigor yet known. An average man at thirty, and yet able at seventy years of age to trot with 500 lbs. on his shoulders.

Get Away From the Bugbear of Training With Checkley, health comes first. He insists in this book that no one without perfect health can have real, enduring strength. He proves that Health, Strength and Vigor Can Be Created by Force of Habit He says: “It will not do to sit, stand and move badly for ninety-nine one hundredths of the time and then hope to make things come out even by one per cent. of right exercise.

“The muscles will have the greatest health, strength and 1staying power that are kept flexible and full of blood by continuous use in every-day life. To expect them to keep healthy by an infrequent fifteen minutes at some machinery, is as unreasonable as to think of preserving the comfort of the stomach with one meal a week.”

Checkley’s book contains a complete exposition of his methods. It will revolutionize all your ideas.

The most instructive and fascinating book in the health and strength field.