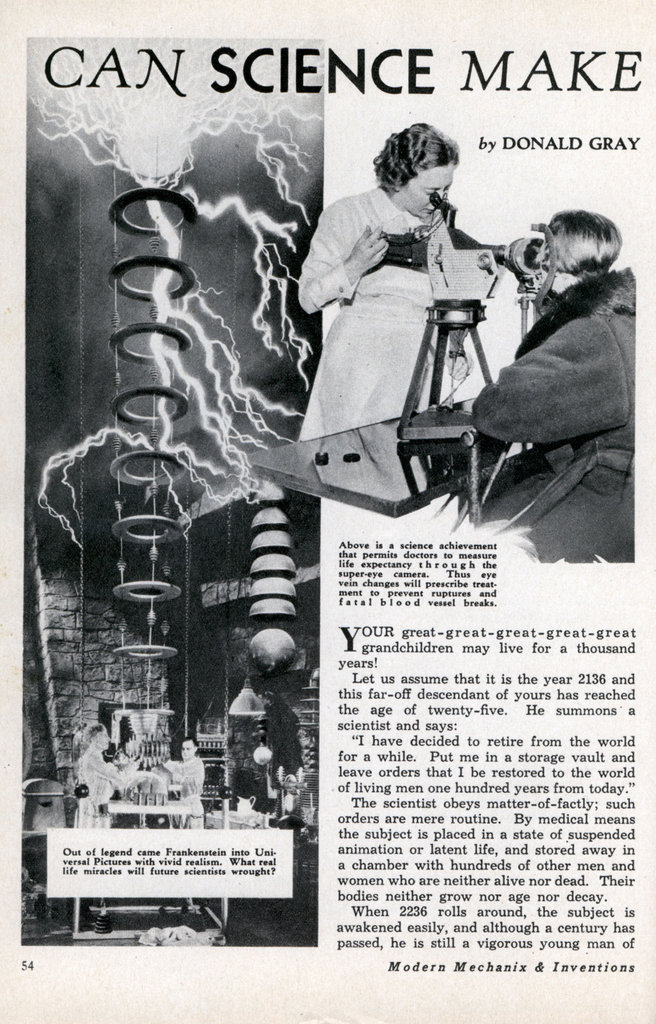 CAN SCIENCE MAKE US LIVE FOREVER?

Look down into the Well of Youth through these pages and see Biology’s most recent and amazing discoveries. For “booster” hearts and human cold storage are just two of many longevity miracles the doctor orders for your descendants.

Let us assume that it is the year 2136 and this far-off descendant of yours has reached the age of twenty-five. He summons a scientist and says:

“I have decided to retire from the world for a while. Put me in a storage vault and leave orders that I be restored to the world of living men one hundred years from today.”

The scientist obeys matter-of-factly; such orders are mere routine. By medical means the subject is placed in a state of suspended animation or latent life, and stored away in a chamber with hundreds of other men and women who are neither alive nor dead. Their bodies neither grow nor age nor decay.

When 2236 rolls around, the subject is awakened easily, and although a century has passed, he is still a vigorous young man of twenty-five, ready to spend the rest of his years as he chooses or to return occasionally to his Rip Van Winkle sleep if he so desires.

Fantastic? Extremely so. Yet entirely with in the range of scientific possibility!

The suggestion does not come from a wild-eyed visionary, but from no less a world -famed authority than Dr. Alexis Carrel of the Rockefeller Institute for Medical Research.

Dr. Carrel is famous for some astounding biological experiments. He has, for instance, kept a strain of cells from a chicken’s heart alive and thriving in a glass container for twenty years. Recently, with Col. Charles A. Lindbergh, he has developed the Lindbergh “life chamber” which is a robot heart of glass in which extirpated organs live and behave very much as they do in the body. So when Dr. Carrel predicts that in remote centuries human life may be immeasurably extended, the statement comes from the one man in the world who is best qualified to make it.

There are several possible means of extending the life span which Dr. Carrel sees open to science. Rejuvenation, or the surgical grafting of young glands into an aging individual, we have only begun to understand. In ages to come such operations may be commonplace, and a fifty-year-old man, spending a day or two in a hospital, may emerge with his age-calendar set back thirty years.

It is quite possible, too, Dr. Carrel believes, that men and women may be enabled to live on vigorously to incredible age simply through a better understanding of the mysteries of the human body. Even today we have centenarians in every land who prove that our bodies hold secrets of vitality we do not begin to suspect.

The conquering of age is not to be looked for in our own generation, or for many that will follow it. Dr. Carrel’s view of the future is an extremely long distance one, and he is careful to make it clear that he does not predict human immortality.

“There is no hope of ever conquering old age and death,” he says. “But it is quite probable that the maximum duration of life can be more or less considerably extended.”

Fundamentally, of course, his predictions are no more unbelievable than Roger Bacon’s prophecy of the airplane in the fifteenth century. Dr. Carrel, like Bacon, is looking many centuries into the future.

Most intriguing to the imagination is the suspended animation, human storage-vault idea which Dr. Carrel describes as follows:

“Some individuals could be put in storage for long periods of time, brought back to normal existence for other periods, and permitted in this manner to exist for several centuries.”

There is sound scientific logic behind the statement. Certain small animals, notably the anthropoids, have been completely dried out in the laboratory. By all normal standards they are dead; their metabolism, or generation of internal heat, ceases. But moisten them with a few drops of water! Here is black magic indeed, for the “dead” animal comes to life! Actually it has not been dead, but in a state of latent life. How can the phenomenon be explained? No man knows the answerâ€”and no one is wise enough to deny that science may not give man a similar power.

Nature herself is the first great master of suspended animation. We see a form of it in the bear, the dormouse, and other mammals which retire to dens at the onset of winter and there spend many months without food or apparent means of sustaining life. Science has a name for itâ€”hibernationâ€”but no answer other than conjecture to the question: “What mysterious force keeps the machinery going?”

Partly dried organsâ€””dead” in the popular senseâ€”have been grafted into guinea pigs by Alexander Lipschutz, and strangely enough have “come alive” and resumed their normal functions. Admittedly the prospect of being dessicated may not appeal to the human being who wants to be stored away for a few hundred years, but there may be other answers to the problem.

When the solution to rejuvenation is finally achieved, it will probably be found that the Lindbergh life chamber, now only a few months old, played a vital part. It is a glass apparatus in which a synthetic blood is made to circulate, with a mechanical “heart” to pump it and a “lung” to purify the fluid. Whole organs can be kept alive in the chamber for an indefinite period and studied just as if they were alive in the body.

Thus an amazing new vista of possibilities is opened up to the scientist. At some distant day, a person with a weak heart may simply go to a surgeon and have a spare organ grafted inâ€”a “booster” heart, so to speak, which will relieve the weakened one of strain.

A diseased organ, such as one attacked by cancer, might also be completely removed without danger, after a healthy substitute had been transplanted and taken up its functions.

Why is it that certain individuals live naturally to advanced ages of a hundred years and more? Because of diet, mode of life, heredity? Answer that question and you can show every human being how to become a centenarian. The vital force which enables a man to live to a hundred years is lying dormant in the bodies of every one of us, if we only knew how to use it.

The Puzzle of Heavy Water

By far the simplest method of insuring eternal youth is the elixir of life sought by the ancientsâ€”and which, amazingly enough, we may have at our disposal today. Chemists call it deuterium oxide; popularly it is known as “heavy water.” It is only a few months since Dr. Harold Urey was awarded a Nobel Prize for its discovery. Heavy water differs from ordinary water in that it possesses an extra molecule of hydrogen.

The startling part heavy water may play in medicine is expresed by Dr. Stephen J. Toner of St. Mary’s College:

“All available evidence points to the fact that heavy water slows down the normal chemical life processes. I am inclined to believe that as our frontiers of knowledge in this respect are pushed back we will find that the accumulaticn of heavy water in the tissues may tend to prolong youth rather than to induce premature old age.”