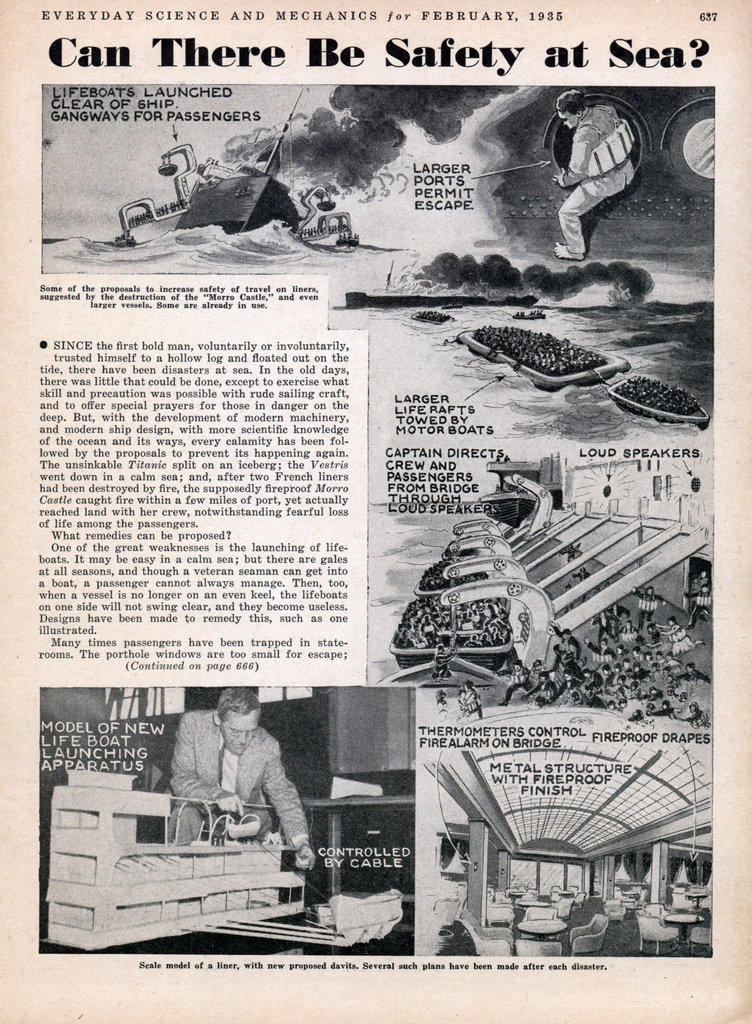 Can There Be Safely at Sea?

SINCE the first bold man, voluntarily or involuntarily, trusted himself to a hollow log and floated out on the tide, there have been disasters at sea. In the old days, there was little that could be done, except to exercise what skill and precaution was possible with rude sailing craft, and to offer special prayers for those in danger on the deep. But, with the development of modern machinery, and modern ship design, with more scientific knowledge of the ocean and its ways, every calamity has been followed by the proposals to prevent its happening again. The unsinkable Titanic split on an iceberg; the Vestris went down in a calm sea; and, after two French liners had been destroyed by fire, the supposedly fireproof Morro Castle caught fire within a few miles of port, yet actually reached land with her crew, notwithstanding fearful loss of life among the passengers.

What remedies can be proposed?

One of the great weaknesses is the launching of lifeboats. It may be easy in a calm sea; but there are gales at all seasons, and though a veteran seaman can get into a boat, a passenger cannot always manage. Then, too, when a vessel is no longer on an even keel, the lifeboats on one side will not swing clear, and they become useless. Designs have been made to remedy this, such as one illustrated.

Many times passengers have been trapped in staterooms. The porthole windows are too small for escape; if they were larger, it would at least be possible to get out into the water. Many of the Morro Castle’s passengers, with life preservers, reached the shore without the aid of a boat; although it must be confessed this would have been of little use in the case of a disaster like that of the Titanic, in mid-ocean and cold weather.

Many of the modern liners have loudspeaker equipment, so that the officers can speak to, and direct, passengers and crew, through a “public address” system. The lack of a means of communication of this kind was evidenced in the Morro Castle affair. Yet such a system, if powered from the engine room, might be disabled when needed. It should have an independent power source for emergency, such as we find in the radio equipment.

With radio developed to its present state, aid is always available within a few hours, on any of the more traveled steamer lanes. It is not necessary that lifeboats be able to travel thousands of miles, as some have done in the old days of navigation. It is necessary to keep passengers afloat only a few hours, and they can be picked up, unless a tempest is raging. It is suggested, therefore, that large life rafts be provided, to be towed by motorboats. The life rafts can be so designed that they could be launched more easily than boats.

The fire hazard has attracted much attention. In the days of wooden ships, fire was one of the greatest perils at sea, be- . cause the whole ship could burn. Now, an iron ship does not burn; but if her cargo, her fuel, her interior decorations can burn, * it may be impossible to stay aboard her. The decorations may be made less combustible without impairing their appearance; and lacquer, varnish, and inflammable cleaning fluids avoided. On many large ships now, there are devices which enable the captain on the bridge to sample the air in any of the compartments of the hold. If there is too much heat, or smoke, it is simply necessary to turn fire-extinguishing gas into the compartment, and everything is over with.

It is possible to insure against every danger at sea—even a typhoon or hurricane, if a ship is stout and not too near a dangerous coast. Everything can be guarded against, so far as the designer or engineer is concerned—except the human element, which has failed in all these great disasters.

For instance, a ship has every improvement which can be suggested but she has few real sailors among her crew—few trained men—and a pleasure-seeking crowd of passengers.

The radio is the greatest addition to navigation since the steam engine. But the radio is under the control, not of the radio operators, but of the captain—and, if the captain is to lose his ship, he feels that his passengers may as well lose their lives. (At least, under present sea practice, that has been too often the actual result.) There are a good many things which can be done, in a mechanical way, to make seagoing more safe. But it would seem that the first need is more men who can utilize the mechanical safety devices when the need arises to do so, as well as the old-time sailors could use their simple ropes and oars.