Who can forget the horrifying newsreel footage of Germany’s subterranean bore worm tanks crashing through the tunnel walls of the Maginot line? 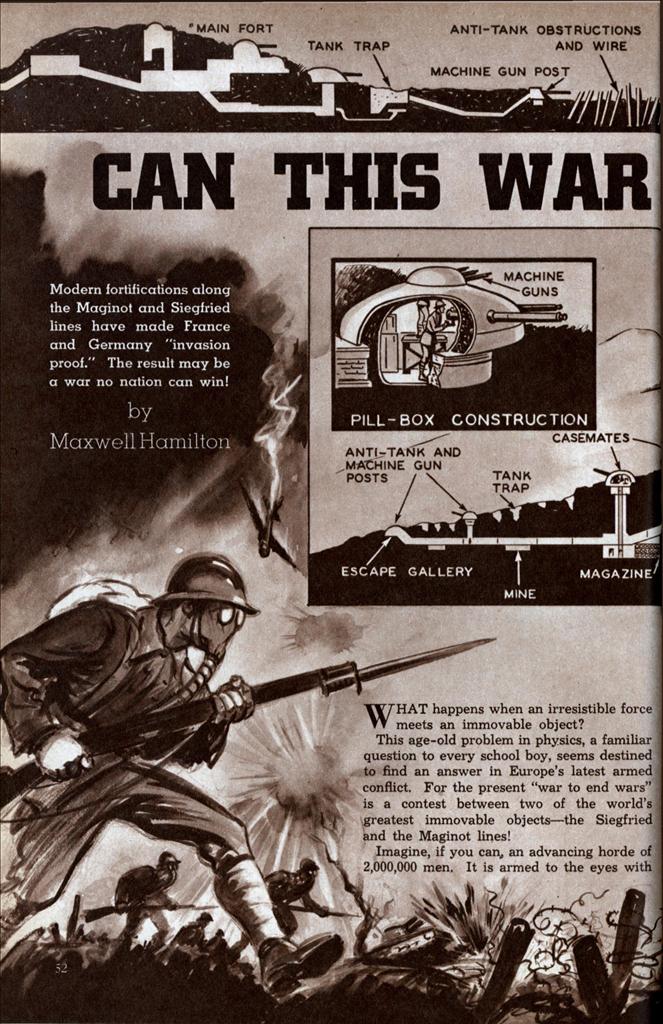 CAN THIS WAR BE WON?

Modern fortifications along the Maginot and Siegfried lines have made France and Germany “invasion proof.” The result may be a war no nation can win!

WHAT happens when an irresistible force meets an immovable object?

This age-old problem in physics, a familiar question to every school boy, seems destined to find an answer in Europe’s latest armed conflict. For the present “war to end wars” is a contest between two of the world’s! greatest immovable objects—the Siegfried and the Maginot lines!

Imagine, if you can,, an advancing horde of 2,000,000 men. It is armed to the eyes with high-speed, rapid-firing tanks, motorized cavalry and infantry, mobile artillery and ammunition units, every known type of poison gas, and the most modern and efficient equipment available for pouring forth a ceaseless storm of shot and shell, endless tons of lead, steel and flame. Magnify this glittering array of death on the march five times over—and, against it, the French defenses on the Maginot line still would remain impregnable!

On the other hand, should the Allies abandon such snug security and launch an attack of their own, just as much power and strength and cunning, multiplied many times over, would avail them nothing. The German Siegfried line—not 10 miles away— is just, as redoubtable, just as impossible to penetrate, as the French fortifications.

It is Armageddon, giant against giant, with victory in the lap of the gods.

Of the two great bulwarks, the French Maginot line would seem to have whatever slight advantage exists. Begun 10 years ago, it has cost France $300,000,000 and has taken all of the intervening years to complete. It is modern, it is thorough, it is highly scientific. The German counterpart, on the other hand, is a product of feverish building over the short space of the last year and a half, with the natural weaknesses of hasty construction deemed certain to appear under fire.

It is to the late Andre Maginot, ex-War Minister of the French Republic and veteran of the First World War, that credit for these amazing fortresses must go. Lying wounded and despairing in a 1917 base hospital, Maginot, a sergeant of artillery, stared at the bullet-pocked ceiling above him, gritted his teeth and groaned with pain.

Eighteen years later, in a meeting of France’s Supreme Council of National Defense, Maginot, the new war minister, 6 feet 2 inches of man, rose to his feet, outlined on a map the French border from Luxemburg to Switzerland and stated his position coldly and determinedly.

“We must build a wall along here,” he said, “that the devil himself can’t break through!”

The result: the Maginot and, later, the Siegfried line.

In a time of peace, you might cross and re-cross the Maginot fortifications and see nothing but rolling hills, dense thickets and an occasional peasant’s shelter. If you were particularly observant, you might note a scattering of small, dome-shaped mounds protruding from the earth, mounds which— in any other locality—would certainly be taken for underground reservoirs or drainage tanks.

Far from drainage tanks, these mounds mark almost the only visible evidence of the greatest fortifications in the history of France! These are pill-boxes, heavily armed, constantly manned—and facing east. What looked like an ordinary thicket turns out to be an enormous cruel mass of twisted barbed wire, and what might have been taken for a peasant’s shelter is, in reality, a block-house, with walls 60 inches of cement and steel and blended into the color of the hillside.

The first consists of the pill-boxes—the dome-shaped mounds—built along the base of the hillside. Although connected with the other fortifications by underground passageways, each pill-box is a separate unit, isolated, to be sold out to the invader at the highest price. It is manned with the very latest type machine guns that can fire for 24 hours without a stop. It has sanitary facilities and is stocked with ammunition, food and water; for it is its purpose to impede the enemy, discourage his advance and then surrender only when its occupants are dead. For volunteer “suicide squads” will man these outposts.

Behind the pill-boxes are the block-houses, containing machine and field guns and connected with each other, and the rear, by subterranean tunnels. They, too, are independent units, capable of standing on their own and—when pill-boxes have fallen—of setting off mines in the passages between these units in order to cut off access through that quarter. The third part of the line also consists of block-houses, only this time they contain more powerful defenses—75 and 155 millimeter cannon (3- and 6-inch)—radio stations, observation posts, field headquarters, and so on.

But these are but surface manifestations of the great Maginot defenses, and, like an iceberg, France’s newest forts are 7/8ths under the surface. Behind the three front lines, and deep in the bowels of the earth, are the living quarters and administration divisions of the defenders. Thus, as fast as front line troops grow weary, fresh detachments are ready and able to go into service. And should the enemy penetrate the three outer walls, he is met back of the lines by brigade after brigade of well-equipped fighters who pour out of the cavernous reaches of the underworld from all sides.

Within the heart of the hillsides, an army can live for months in the ingenious recesses of which Andre Maginot dreamed. There are comfortable steel-lined barracks, air-conditioned and strengthened to withstand five times the assault put upon them in their first tests. There are escalators from one level to another, kitchens, hospitals, ammunition dumps, reservoirs—even wine cellars and recreation rooms. Telephone cables are steel-insulated to withstand the shock of high explosive, and when they fail there is the radio. If that goes dead, then pigeons go into action.

The fact that the superstructures are located on hilltops minimizes the poison gas nuisance. Gas needs dry weather and low, windless country; but, even if it came, the Maginot line would be ready for it. Guns are set in water-tight jackets and embrasures that defy the entry of gas; and the smoke and fumes from gun discharges within the fortifications are ingeniously disposed of through ducts which permit exit but not entrance. The air in these defenses, aided by pressure, is as pure as that of a mountain cave.

As safe as they are inside, the inhabitants i of both the Maginot and Siegfried lines are amply protected on the surface. Andre Maginot, as well as his rivals across the German border, realized that such defenses might be surmounted or crushed easily by the fast and powerful tanks of the war that was to come, and this angle has been taken into consideration.

Machine gun nests, block-houses and other defensive works are skirted by a veritable morass of tank traps. Thousands of steel rails, set end upright in solid concrete and steel, and with their upper ends protruding at different heights out of the earth, stand like a garden of irregular bean poles to impale the fastest tank and strip its belt tracks. If an enemy driver successfully skirts this “asparagus,” and is not disabled by the withering anti-tank cross-fire which besets him from pill-boxes and block-houses* on all sides, his troubles have just begun. For he will find that the most solid earth will turn out to be a deep, wedged-shaped pit, concealed by grass and underbrush, and into which he will sink out of action.

In the meantime, the infantry is having its troubles in jungles of barbed-wire, carefully woven and supported in days of peace, when things can be done carefully and devilishly. In some instances, these nests of wire are even electrified to put the crusher on any army that dared to try to pass or cut them.

In this latter respect, the German and French defenses are much the same and present no dissimilarity to the casual observer. The German “asparagus” protrusions are different only in that the rails have been encased in concrete and stretch in columns of four for miles and miles along the border. They were built by Fritz Todt, German road expert, who drove an army of 500,000 workers for more than a year before completing the project last Summer.

With this minor difference, and despite the denials of Adolf Hitler, the German West Wall—as the Siegfried line is called in the Reich—is almost a copy of the Maginot fortifications. There are reputed to be almost 600 of the hillside, pill-box forts of the Maginot type on German soil, all complete with living quarters, air conditioning, latest type armanents, plumbing, telephones, radio and recreation facilities.

The German barricades extend more than 400 miles along the frontier, are drilled—in some places—as much as 30 miles into German territory, and are said by Der Feuhrer to be able to withstand any attack, whether from air, by tank, by gas or heavy artillery.

The British have deprecated the efficiency of the German line on several occasions. According to their reports, the subterranean dug-outs of the Germans may be able to thwart any human enemy but were flooded by the high waters of the Rhine last Summer, forcing a hasty evacuation. Furthermore, they say, the German soldiers are unhappy underground because of the fact that the galleries are crammed to overcrowding with ammunition, the air conditioning doesn’t work and ventilation is bad, and there has been a marked shortage of food, forcing the troops to come out and show their hideaways.

Regardless of these rumors, however, it is apparent that both teams have power aplenty to stave off attack from all sides, and neutral observers are of the opinion that this new war really may be the war to end wars. They point out that, with neither side able to gain any ground on the other, they will have to resort to air raids and bombing of non-combatants, and eventually—like invincible knights of King Arthur—both sides will battle to exhaustion. And the conflict will be at an end.

But man’s best laid plans sometimes go awry. Both Germany and the Allies are rumored to have some secret and amazing weapons which they are saving till the real scrap begins. If these rumors are true, then guesswork goes out the window.

The question is, however—Have the boys got such weapons?