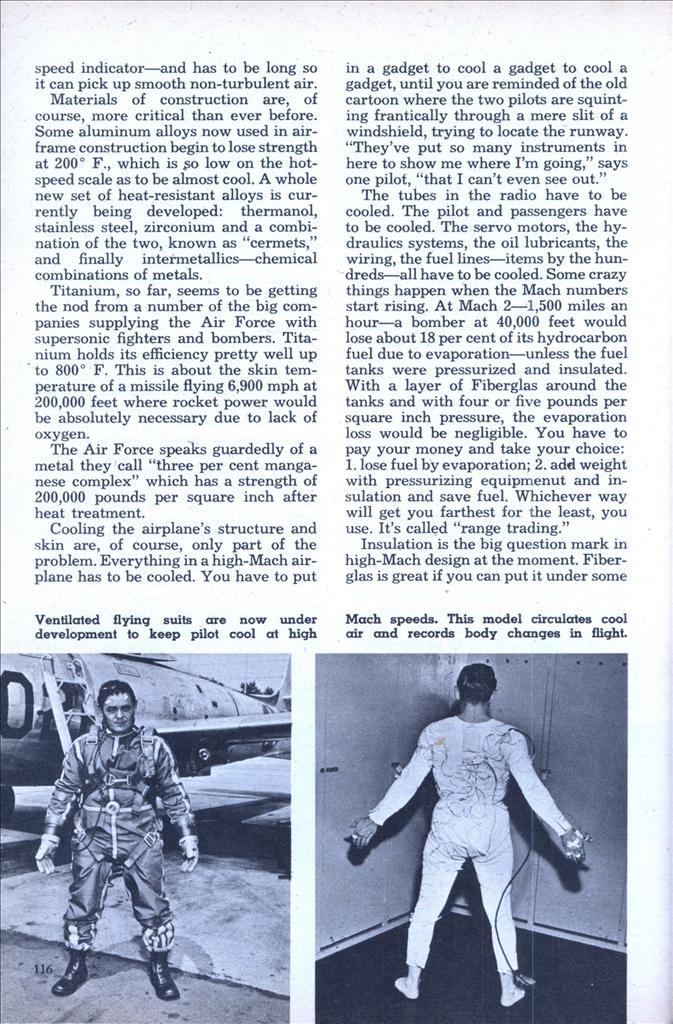 CAN WE CRASH THE DEADLY FLAME BARRIER?

Fly a plane fast enough and friction will melt it. Can we “put out the fire?”

ENGINEERS, who sometimes get pretty irritated when writers dream up catch phrases for their scientific findings, are not exactly happy with the term Flame Barrier or Heat Barrier which has been applied to hypersonic flight. (A barrier, say the engineers, is something you can climb over, sneak around or bull your way through. None of these work when an air-breathing, wing-lifted vehicle is trying to go faster and faster in the envelope of air which surrounds the earth.) But regardless of what you call it, the obstacleâ€”air frictionâ€”is there and gets worse with each extra mile per hour of speed. Eventually you wind up as a glowing ember, blob of molten metal, or a cloud of superheated dust.

Using heat-resistant metals and ceramics, man can probe the front yard of the Flame Barrier. But with known materials he can only go so far. Aluminum melts under continued Mach 5 conditions. (Mach 1 is the speed of sound, approximately 750 mph at sea level. It varies according to the altitude and temperature.) Steel melts at a steadily-maintained Mach 6. Should you get very fancy and build a plane out of blastfurnace bricks there would come an unhappy moment when these bricks would vaporize under super-Mach speed.

Hot-speed problems are like the evils in Pandora’s box. When you’ve lifted the lidâ€”around 1,500 miles an hourâ€” they come swarming out by the dozens. Take just the outer skin of the aircraft. In the good old days of aviationâ€”and even todayâ€”the metal skin of a transport airplane can be expected to last almost indefinitely. Not so with a high-Mach plane. The skin of such a craft softens at elevated temperatures and the air friction which heats the skin then tends to pull it out of shape. This pulling may be so small as to be invisible to the naked eye. But it is extremely dangerous. Not only does it remain after the flightâ€”but it grows steadily worse on every subsequent flight at hot speeds. Sooner or later you have to condemn the skin of the airplane as unsafe.

Not only must you condemn the skin, the internal bracings are also affected by heat which has been transferred through the airplane’s skin and have been weakened by the “thermal buckling.” Imagine a column of metal fastened between two rigid surfaces. Heat it … it wants to elongate and can’t . . . and so it does the only other thingâ€”it buckles. A very little “thermal buckling” inside a wing can render that wing unsafe for flight.

Power plants for high-Mach flight will eventually be rockets. Turbojet engines â€”notably the Pratt and Whitney J-57, an improved version of which is said to develop 16,000 pounds of thrust with afterburner onâ€”have several limiting features. One of them is the inability of the high-speed turbines to withstand the heat. Another is size, fuel and weight limitations. If you build a turbojet engine big enough and powerful enough to push an airplane up to 3,000 miles an hour, the airplane becomes enormous. Worse than that, you have to carry so much fuel there’s no room for payload. The whole operation becomes impractical. A ramjet engine is a better bet in some ways but it, too, has drawbacks.

Rockets, which will work without any outside atmosphere, have many advantages. Bell Aircraft Company has done a great deal of research on rocket motors and has come up with an aluminum-alloy job which can be built quickly and cheaply out of standard alloys and uses a relatively plentiful and cheap type of rocket fuelâ€”acid and standard JP-4 jet fuel. The Bell package has made runs of 10 minutes duration and some motors have logged an hour on powerâ€”which is a ripe old age for a rocket motor in any league. Bell can handle engines with 50,000 pounds of thrust in their laboratories at the momentâ€”and 100,000 pound-thrust engines may be possible in Â¦ this lab in the not too distant future.

Rocket engines are admittedly hard to control. The best way at present seems to be to install four or five of them and use one at a time, as needed, conserving the rest. The thrust per pound of weight is fantastically good in a rocketâ€”which is one of the main reasons why their future seems so bright in high-Mach flight. Bell experimental rocket planes have been flying for years at Muroc, where they have a tremendously long natural runway for power-off landings. Since it will not be possible to have these long runways commercially, some way must be found to shorten the landing roll of the rocket planes.

Sleek configuration of airplanes, with a minimum of knobs, fillets and other “stagnation points” is a must in hot speed flight. Tests have shown that burbling air is many times hotter than air which slides smoothly over the surface of the plane like a coat of invisible skin. Flying Saucers may not be real but they are certainly the best theoretical shape for really high speeds. The hottest spots on current airplanes are places where the air rams the airplane head-onâ€”leading edges of wings, tail surfaces, fuselage nose, airscoops and the like. At tremendous speeds the plane backs air up well out in front of itâ€”like a snowplow pushing a heavy driftâ€”and the proof of this is the very long hypodermic-like needle which thrusts out of many highspeed planes. It’s the tube for the air- – speed indicatorâ€”and has to be long so it can pick up smooth non-turbulent air.

Materials of construction are, of course, more critical than ever before. Some aluminum alloys now used in airframe construction begin to lose strength at 200Â° F., which is so low on the hot-speed scale as to be almost cool. A whole new set of heat-resistant alloys is currently being developed: thermanol, stainless steel, zirconium and a combination of the two, known as “cermets,” and finally intermetallicsâ€”chemical combinations of metals.

Titanium, so far, seems to be getting the nod from a number of the big companies supplying the Air Force with supersonic fighters and bombers. Titanium holds its efficiency pretty well up * to 800Â° F. This is about the skin temperature of a missile flying 6,900 mph at 200,000 feet where rocket power would be absolutely necessary due to lack of oxygen.

The Air Force speaks guardedly of a metal they call “three per cent manganese complex” which has a strength of 200,000 pounds per square inch after heat treatment.

Cooling the airplane’s structure and skin are, of course, only part of the problem. Everything in a high-Mach airplane has to be cooled. You have to put in a gadget to cool a gadget to cool a gadget, until you are reminded of the old cartoon where the two pilots are squinting frantically through a mere slit of a windshield, trying to locate the runway. “They’ve put so many instruments in here to show me where I’m going,” says one pilot, “that I can’t even see out.”

The tubes in the radio have to be cooled. The pilot and passengers have to be cooled. The servo motors, the hydraulics systems, the oil lubricants, the wiring, the fuel linesâ€”items by the hundredsâ€”all have to be cooled. Some crazy things happen when the Mach numbers start rising. At Mach 2â€”1,500 miles an hourâ€”a bomber at 40,000 feet would lose about 18 per cent of its hydrocarbon fuel due to evaporationâ€”unless the fuel tanks were pressurized and insulated. With a layer of Fiberglas around the tanks and with four or five pounds per square inch pressure, the evaporation loss would be negligible. You have to pay your money and take your choice: 1. lose fuel by evaporation; 2. add weight with pressurizing equipmenut and insulation and save fuel. Whichever way will get you farthest for the least, you use. It’s called “range trading.”

Insulation is the big question mark in high-Mach design at the moment. Fiberglas is great if you can put it under some outer covering so it won’t be blown away. But you can’t attach Fiberglas all over the outside of a high-Mach plane and expect to find any of it when you land. Unfortunately, to do any good the insulation must be outside where all the wind pressure is and heat-transfer begins. If you have some material in mind which is as good as Fiberglas at insulation . . . and able to stand up to the terrific pressures generated in high-Mach flight as well . . . you can name your price.

All sorts of elaborate coolers have been developed already and more can confidentially be expected. These coolers go into multi-stage step-downs, with each section of the unit knocking so many degrees out of the air until it finally gets down to usable temperature. Good old water, after long experiment, seems to be the best coolant for hot speed flight. One plan is to perforate the fuselage with many tiny pinholes and sweat the water out through the airplane’s – skin, the way water is released through the pores of the human body. Although this might seem fantastic, it is really quite practical and considerable research is going into it.

The most practical “out,” however, is to sneak around the edge of the Hot Wall as much as possible, instead of barreling straight into it. By flying high, where the air is thin, the friction of the molecules of air against the skin of the airplane can be greatly reduced. By staying at high speed only a short time and not giving the friction a chance to hotsoak the airplane too much, heat tolerances can be held within acceptable limits. This seems to be the way high-Mach flight will be approached as far as civilian transport service is concerned. It would obviously have drawbacks in military maneuvers, since you couldn’t very well stop fighting with somebody simply because you were getting too hot. One thing is sure: high-Mach flight is coming in fast. If you don’t believe it, just look at the current crop of USAF planes. Even the bombers are now going hypersonic in level flight, on power alone, as witness the Convair B-58 Hustler, which has been ordered into production. It may well be possible, in our lifetime, to step casually into a rocket ship in San Francisco, hurtle eastward at 3,000 mph at 200,000 ft. altitude, and step out in the city of New York barely an hour later. And if we solve the problems of the Heat Barrier, you won’t even raise a sweat!