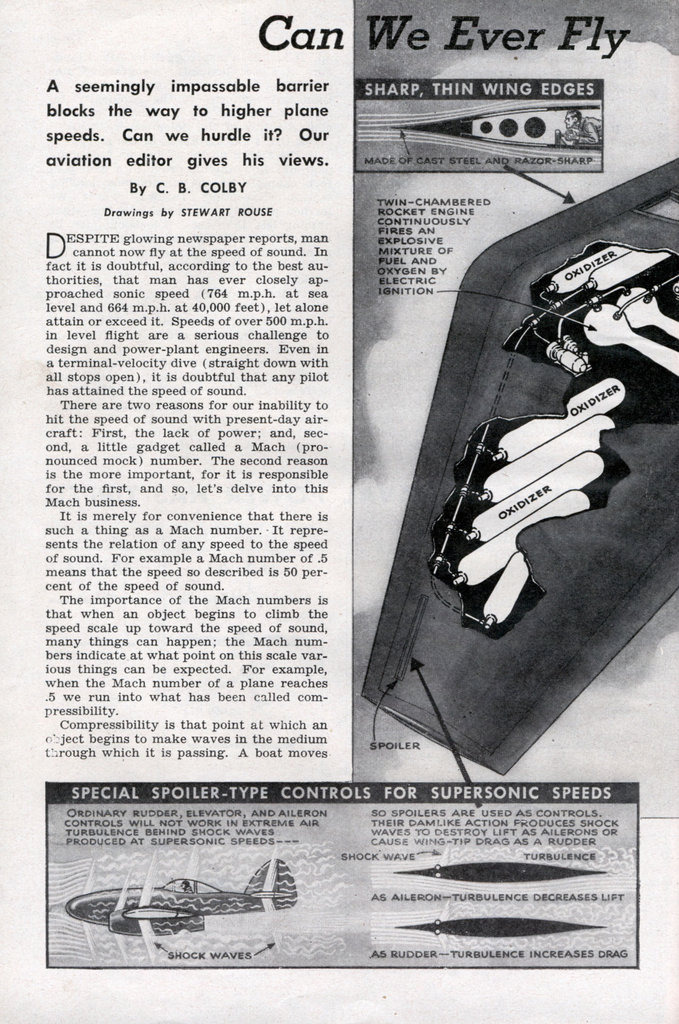 Can We Ever Fly Faster Than Sound?

A seemingly impassable barrier blocks the way to higher plane speeds. Can we hurdle it? Our aviation editor gives his views.

DESPITE glowing newspaper reports, man cannot now fly at the speed of sound. In fact it is doubtful, according to the best authorities, that man has ever closely approached sonic speed (764 m.p.h, at sea level and 664 m.p.h, at 40,000 feet), let alone attain or exceed it. Speeds of over 500 m.p.h, in level flight are a serious challenge to design and power-plant engineers. Even in a terminal-velocity dive (straight down with all stops open), it is doubtful that any pilot has attained the speed of sound.

There are two reasons for our inability to hit the speed of sound with present-day aircraft: First, the lack of power; and, second, a little gadget called a Mach (pronounced mock) number. The second reason is the more important, for it is responsible for the first, and so, let’s delve into this Mach business.

Compressibility is that point at which an object begins to make waves in the medium through which it is passing. A boat moves ahead slowly through the water, and no waves appear. It moves faster, and waves begin to stream around it, caused by the hull pushing ahead too fast for the water to part, let the hull pass, and then flow together behind it. There is a critical speed for every object, at which these waves appear.

A boat with a sharp prow can reach a higher speed before the waves begin to appear than can a square-prowed barge. Even the latter can move without waves up to a certain speed, for any object moving through a liquid is preceded by a compression wave. This compression wave prepares the medium for the passage of the object causing the wave.

In the case of an object such as an aircraft, projectile, or propeller moving through the air, this pressure wave that “runs interference” for the object moves at the speed of sound. The air entered by the pressure wave is prepared so that it will part and flow about the object and then recombine with the air particles behind.

We also know that air flowing about any object must speed up and then slow down again to let the object pass. This may be an engine cowl, wing, tail, or cockpit cover. At about a Mach’s number of .5 in an aircraft’s speed, some of the air passing over parts of the plane’s surface has already reached a higher Mach number, for it has had to go much faster to get around these partsâ€”although the plane itself has not anywhere near approached the sonic speed. What happens? Plenty!

Instead of flowing smoothly around the part, the air is smacked against it with such force that waves of compressed and rarefied air in alternate bands are formed at the point of impact. When an object is traveling at the speed of sound, which is also the speed of a compression wave, it is easy to see what this can mean. It is like a football player who cuts ahead of his interference and is tackled. He keeps his feet and tries to drag the tackier along with him. This takes power. Making waves takes power, too, whether in a boat or in the parts of a plane. In fact, it takes such power that a plane can reach a point where it can not go any faster without a staggering increase in power. For example, let’s take a plane weighing 10 tons, with an engine of 5,000 hp., flying at a speed of nearly 500 m.p.h. At this speed, the air going over and around parts of the plane has already reached the speed of sound. Waves of compressibility appear in many places on its surface. These waves prevent the plane from going faster, for they need more power to drag them along through the air. We cannot just add another 1,000 hp. and reach 600 m.p.h. We will have to add 37,000 hp. to get that additional 100 m.p.h. This is obviously an impossibility in the case that has been cited.

It is not attaining: the speed of sound that causes trouble, but the compression waves and resulting turbulence when the air particles have to slow down again after the airfoil has passed. The air passing over the curve of the front of the airfoil starts off at great speed which almost instantly reaches sonic velocity and then runs smack into the slow-speed air in great turbulence behind the wing section. The result is a shock wave at the slow-down point.

If the speed of the wing were less, the air would be able to pass smoothly around it without separating from the surface. Compressibility difficulties are, in general, caused by trying to get too much lift out of a given airfoil at a given speed. The resulting turbulence and loss of lift are the same as if the wing were flying too slowly and stalled.

This turbulence does not really stream out behind the wing. It merely remains for a time after the plane has passed, in the manner of dust after a car on a country road, and finally settles back into a state of calm. And, just as some of the dust is carried along with the passing car, some of the air particles are carried along with the plane to add to the general turbulence around the area.

The effect on the tail surfaces of the plane is like that on a small boat being towed behind a bigger and faster boat which makes waves that do not fit the hull of the smaller boat. Turbulence resulting from the passage of air through the shock wave about the main wing and fuselage fittings smacks into the tail surfaces, making them inefficient and even subject to damage. A small angle about the cockpit canopy, control-surface hinge, or aerial mast will build up an airflow to a point of compressibility or wave-making air speed, with the result that a shock wave is formed which may cause damage unless the fitting can take the resulting shock.

The problem for our engineers is to design aircraft and their parts to minimize this shock wave or postpone its formation to a higher Mach number. The general formula seems to be to reverse all streamlining. It is not quite as simple as all that, but it ap-pears that reversed streamlining, with the pointed end foremost, will enable the object to enter the unprepared air with a minimum of shock, which may postpone the forming of the shock wave over the surface.

So far, supersonic speeds are relatively unknown except in propeller tips and bullets. Bullets, of course, can fly at supersonic speeds, but only for a matter of seconds. They can stand these turbulences, because they are solid structures, perfectly streamlined, and driven by the energy of an outside and left-behind powerâ€”gunpowder in explosion. Were it not for the fact that projectiles are primarily designed for penetration rather than for velocity, their shape might indeed be altered for even more speed. In fact, false streamlined noses have been added to certain types of long-range shells to give them higher velocity and added wallop.

The smooth skin of the projectile helps, of course. In the same way, butt joints, polished metal surface coverings, and flush riveting on military aircraft help to prevent the air from separating about the surfaces and bursting off in a shock wave. Engineers are working to develop airfoils in which the formation of shock waves will be delayed as much as possible. They have found that, for a given enclosed volume, a body composed of two parabolic arcs causes the minimum of energy to be spent in wave motion.

Of course, this would bring the tail right into the middle of the turbulence from the wingâ€”unless the tail was placed ahead of the wing. Then the tail itself would produce a small turbulence to be felt by the wing. This might call for making the plane a flying wing.

At present, higher speeds can be made at lower altitudes without shock or compressibility waves being formed. This is possible because the speed of sound is greater at the lower levels. There is a 100-mile difference between sea level and 35,000 feet. (Above 35,000 it is constant, since the temperature is constant.) This difference will allow a plane at sea level in the neighborhood of 100 m.p.h, more speed before the critical speed at which the compressibility effect and waves begin to form, although at high altitudes this condition may still be encountered around poorly faired cowlings and fittings if the angles are sufficient to step up the air flow about them.

The possibility of fitting aircraft designs to the wave patterns formed is being considered, as is also the designing of planes to prevent wave formation. The airfoil needed apparently would have extremely thin entering and leaving edges with gentle curves between, which would require a minimum of air movement to allow its passage. The question now arises, whether such a wing designed for supersonic flight would be useful at less than these speeds. Such an airfoil might be testable in a high-speed wind tunnel, but its ability to provide lift at normal take-off speeds of 100 m.p.h, or less is another matter.

So far, we have very cagily ducked the main problem in connection with supersonic flying. That is the matter of control of such an aircraft. The matter of control is a mighty ticklish one at speeds where the slightest movement of any part of the whole produces fantastic pressures and loads as well as more shock waves. Flying at supersonic speeds in straight, level flight is one thing, but maneuvering at these speeds is quite another. It is possible that pressure-changing devices, such as spoilers, will have to be incorporated in the design. It may be that jet impulses will have to be utilized to nudge the aircraft onto another course with gentle pushes against the airflow. No one knows at the present time.

As we have mentioned, the power to attain these speeds is another problem. While gravity helps in a terminal-velocity dive (the only way we can now even approach the speed of sound with an aircraft as an entirety), reaching these speeds in level flight with the present power plants seems to be an impossibility.

In addition to power and controllability, we must have strength. Our supersonic aircraft must be able to withstand these tremendous pressures and shock-wave buf-fetings. The pilot must be adequately protected, for failure of the structure would present him to a 700-m.p.h. air front, which would make bailing out anything but the harmlessly exciting thing it is now.

The writer asked one authority what would be the effect on the human body of bailing out at supersonic speeds. The written reply was the one word “AWFUL!” underlined several times.

Now that we are at the beginning of a new phase in the conquest of the air, we must proceed cautiously. We are entering an entirely new field of explorationâ€”a field in which tragedy may await the unwary. Undoubtedly, there will be occasional unpremeditated forays into this unknown territory, and it will be up to the men who make them to add to the general fund of knowledge through careful analysis of their experiences. One by one the small barriers will be removed, so that the whole picture of supersonic flight will become clearer. Eventually, we shall be able to travel at speeds that now seem eternally impossible â€”just as present-day speeds might have seemed to the Wright brothers.