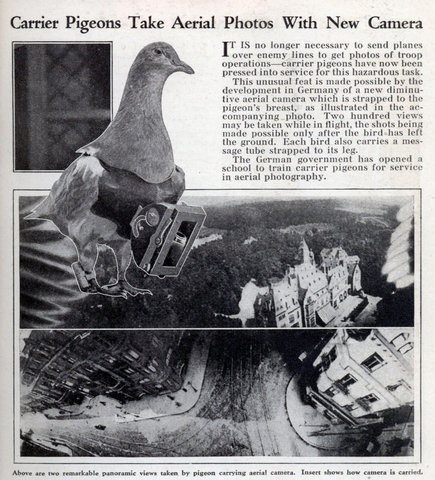 Carrier Pigeons Take Aerial Photos With New Camera
IT IS no longer necessary to send planes over enemy lines to get photos of troop operationsâ€”carrier pigeons have now been pressed into service for this hazardous task.

This unusual feat is made possible by the development in Germany of a new diminutive aerial camera which is strapped to the pigeon’s breast, as illustrated in the accompanying photo. Two hundred views may be taken while in flight, the shots being made possible only after the bird has left the ground. Each bird also carries a message tube strapped to its leg.

The German government has opened a school to train carrier pigeons for service in aerial photography.