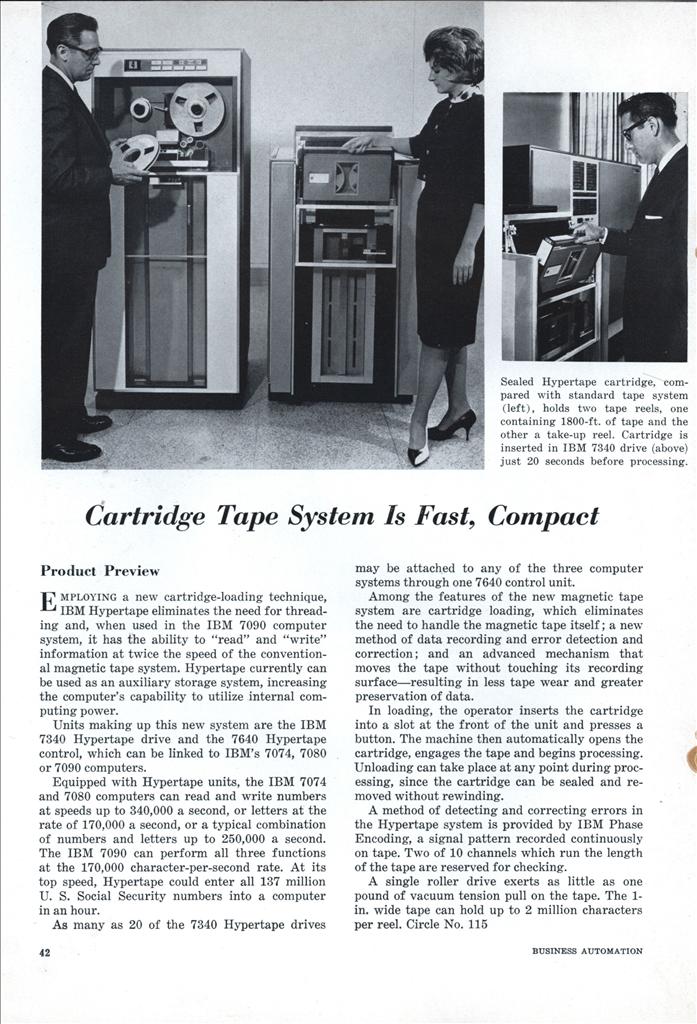 Employing a new cartridge-loading technique, IBM Hypertape eliminates the need for threading and, when used in the IBM 7090 computer system, it has the ability to “read” and “write” information at twice the speed of the conventional magnetic tape system. Hypertape currently can be used as an auxiliary storage system, increasing the computer’s capability to utilize internal computing power.

Equipped with Hypertape units, the IBM 7074 and 7080 computers can read and write numbers at speeds up to 340,000 a second, or letters at the rate of 170,000 a second, or a typical combination of numbers and letters up to 250,000 a second. The IBM 7090 can perform all three functions at the 170,000 character-per-second rate. At its top speed, Hypertape could enter all 137 million U. S. Social Security numbers into a computer in an hour.

As many as 20 of the 7340 Hypertape drives may be attached to any of the three computer systems through one 7640 control unit.

Among the features of the new magnetic tape system are cartridge loading, which eliminates the need to handle the magnetic tape itself; a new method of data recording and error detection and correction; and an advanced mechanism that moves the tape without touching its recording surface—resulting in less tape wear and greater preservation of data.

In loading, the operator inserts the cartridge into a slot at the front of the unit and presses a button. The machine then automatically opens the cartridge, engages the tape and begins processing. Unloading can take place at any point during processing, since the cartridge can be sealed and removed without rewinding.

A method of detecting and correcting errors in the Hypertape system is provided by IBM Phase Encoding, a signal pattern recorded continuously on tape. Two of 10 channels which run the length of the tape are reserved for checking.

A single roller drive exerts as little as one pound of vacuum tension pull on the tape. The 1-in. wide tape can hold up to 2 million characters per reel. Circle No. 115