So that gangsters and hit-and-run drivers cannot escape pursuing police cars in crowded city streets, a St. Louis, Mo., inventor has devised a pistol which shoots a small celluloid shell about the size of a hen’s egg. Upon hitting the body of a fleeing automobile it creates a large splash of red dye. This identifies the car as one wanted by the police. The barrel of the pistol is about two inches in diameter, and the projecting mechanism is a spring which will shoot the shell over 900 feet. The nose of the shell is soft rubber, underneath which is a pin valve that releases the dye. 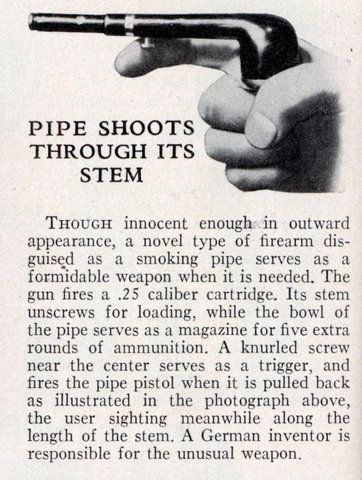 PIPE SHOOTS THROUGH ITS STEM
Though innocent enough in outward appearance, a novel type of firearm disguised as a smoking pipe serves as a formidable weapon when it is needed. The gun fires a .25 caliber cartridge. Its stem unscrews for loading, while the bowl of the pipe serves as a magazine for five extra rounds of ammunition. A knurled screw near the center serves as a trigger, and fires the pipe pistol when it is pulled back as illustrated in the photograph above, the user sighting meanwhile along the length of the stem. A German inventor is responsible for the unusual weapon. 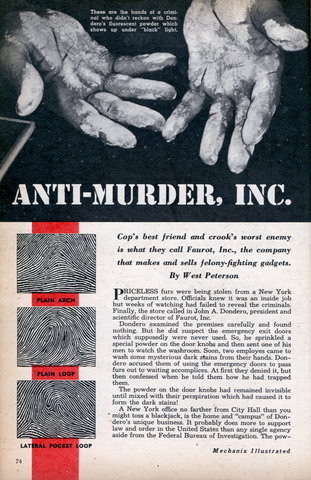 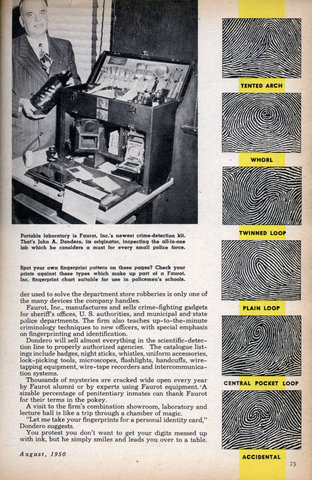 Cop’s best friend and crook’s worst enemy is what they call Faurot, Inc., the company that makes and sells felony-fighting gadgets.

PRICELESS furs were being stolen from a New York department store. Officials knew it was an inside job but weeks of watching had failed to reveal the criminals. Finally, the store called in John A. Dondero, president and scientific director of Faurot, Inc.

Dondero examined the premises carefully and found nothing. But he did suspect the emergency exit doors which supposedly were never used. So, he sprinkled a special powder on the door knobs and then sent one of his men to watch the washroom. Soon, two employes came to wash some mysterious dark stains from their hands. Dondero accused them of using the emergency doors to pass furs out to waiting accomplices. At first they denied it, but then confessed when he told them how he had trapped them.

NEW YORK’S most dramatic gesture in its recent declaration of war-to-the-last-ditch on gangsters is the adoption by the police force of the armored motorbike and the sawed-off repeating shotgun. Squadrons of these war-like motorbikes will patrol the streets to strike terror into the hearts of the criminals who have turned New York into a veritable No-man’s land, raking the streets with submachine gun fire and cutting down everybody who happens to get in the way.

To expedite the capture of gangsters, New York police officials are planning to equip all squad- cars and motorbikes with shortwave sending and receiving sets. 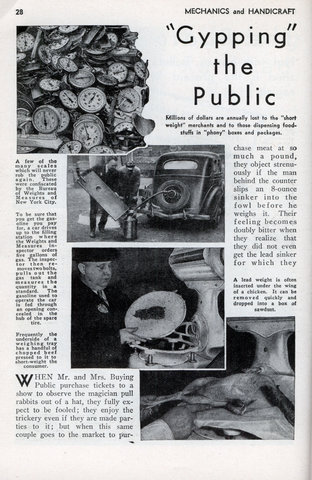 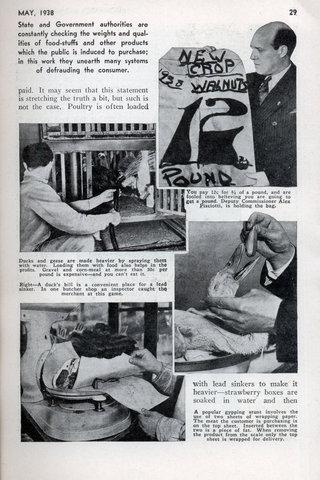 Millions of dollars are annually lost to the “short weight” merchants and to those dispensing foodstuffs in “phony” boxes and packages.

WHEN Mr. and Mrs. Buying Public purchase tickets to a show to observe the magician pull rabbits out of a hat, they fully expect to be fooled; they enjoy the trickery even if they are made parties to it; but when this same couple goes to the market to purchase meat at so much a pound, they object strenuously if the man behind the counter slips an 8-ounce sinker into the fowl before he weighs it.

Mechanics And Handicraft
Issue: May, 1938
Posted in: Crime and Police
2 Comments on “Shooting It Out” with Movie Gangsters” (May, 1938) 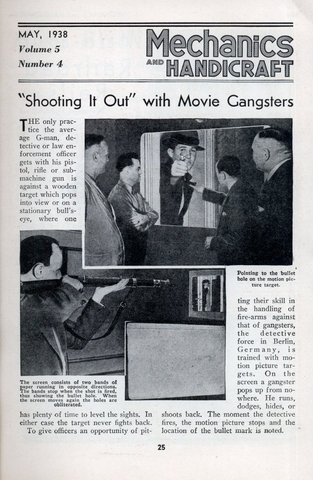 “Shooting It Out” with Movie Gangsters”

THE only practice the average G-man, detective or law enforcement officer gets with his pistol, rifle or submachine gun is against a wooden target which pops into view or on a stationary bull’s-eye, where one has plenty of time to level the sights. In either case the target never fights back.

Mechanics And Handicraft
Issue: May, 1938
Posted in: Crime and Police
9 Comments on Riot Car Shoots Water, Bullets or Poison Gas (May, 1938) 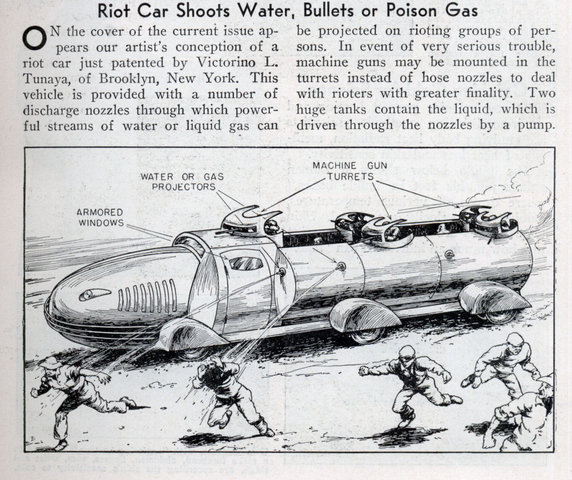 ON the cover of the current issue appears our artist’s conception of a riot car just patented by Victorino L. Tunaya, of Brooklyn, New York. This vehicle is provided with a number of discharge nozzles through which powerful streams of water or liquid gas can be projected on rioting groups of persons. In event of very serious trouble, machine guns may be mounted in the turrets instead of hose nozzles to deal with rioters with greater finality. Two
huge tanks contain the liquid, which is driven through the nozzles by a pump.

A Teller-Vision Cage sounds like something a redneck would use to protect his TV from being stolen. 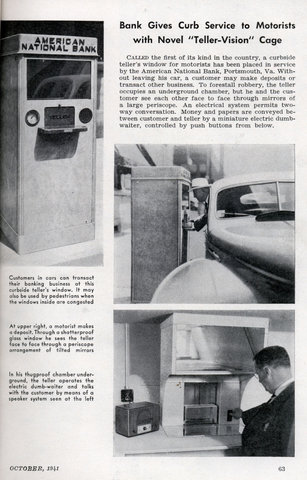 Called the first of its kind in the country, a curbside teller’s window for motorists has been placed in service by the American National Bank, Portsmouth, Va. Without leaving his car, a customer may make deposits or transact other business. To forestall robbery, the teller occupies an underground chamber, but he and the customer see each other face to face through mirrors of a large periscope. An electrical system permits two-way conversation. Money and papers are conveyed between customer and teller by a miniature electric dumbwaiter, controlled by push buttons from below.

Tear Gas Gun on Wrist Is Fired by Finger Ring Trigger
Shot by a trigger worn as a finger ring, a wrist gun that belches out clouds of tear gas has been designed for the protection of clerks, cash-iers and payroll messengers. The little gun, with its muzzle pointing forward, is strapped to the wrist where it is hidden by the coat sleeve. A thread of flesh-colored catgut, invisible at a glance, connects a ring worn on the second finger with a trip that releases the gas. The hand can be moved about freely, but when the wrist is bent suddenly at a sharp angle, the gas is discharged. To protect the wearer’s arm from being burned by the gas, the skin under the muzzle of the gun is covered by a wide band of leather. A retired Chicago, 111., policeman is the inventor of the new anti-holdup gun. 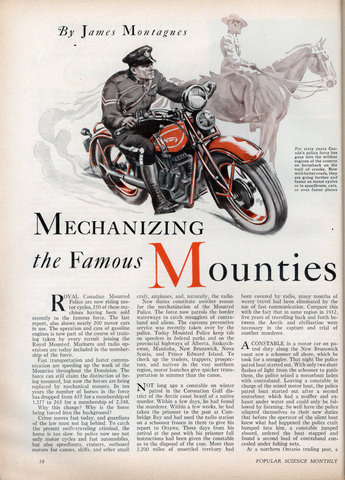 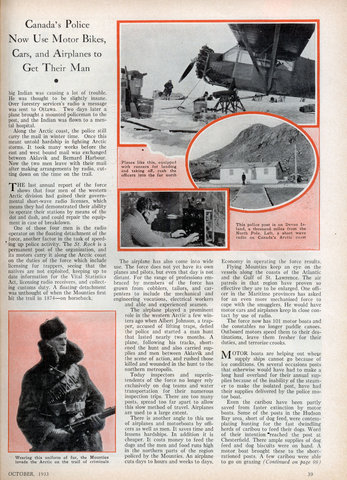 ROYAL Canadian Mounted Police are now riding motor cycles, 250 of these machines having been sold recently to the famous force. The last report, also shows nearly 200 motor cars in use. The operation and care of gasoline engines is now part of the course of training taken by every recruit joining the Royal Mounted. Mariners and radio operators are today included in the membership of the force.