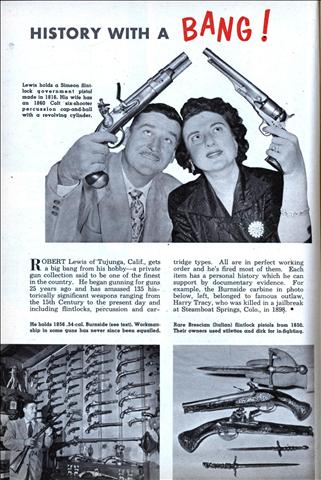 HISTORY WITH A BANG!

ROBERT Lewis of Tujunga, Calif., gets a big bang from his hobby—a private gun collection said to be one of the finest in the country. He began gunning for guns 25 years ago and has amassed 135 historically significant weapons ranging from the 15th Century to the present day and including flintlocks, percussion and cartridge types. All are in perfect working order and he’s fired most of them. Each item has a personal history which he can support by documentary evidence. For example, the Burnside carbine in photo below, left, belonged to famous outlaw, Harry Tracy, who was killed in a jailbreak at Steamboat Springs, Colo., in 1898. 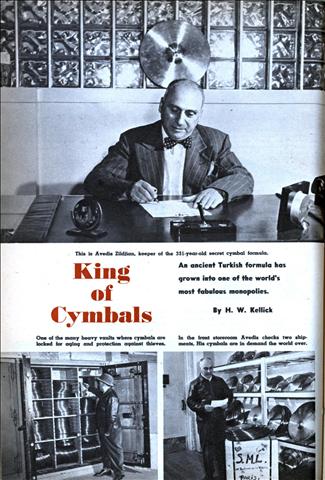 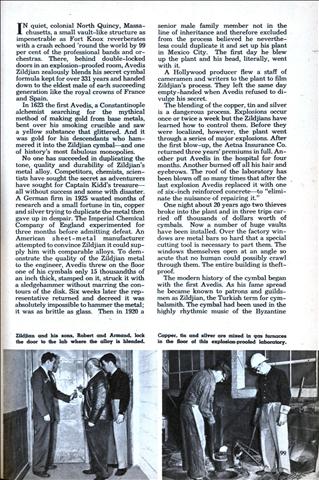 An ancient Turkish formula has grown into one of the world’s most fabulous monopolies.

IN quiet, colonial North Quincy, Massachusetts, a small vault-like structure as impenetrable as Fort Knox reverberates with a crash echoed ’round the world by 99 per cent of the professional bands and orchestras. 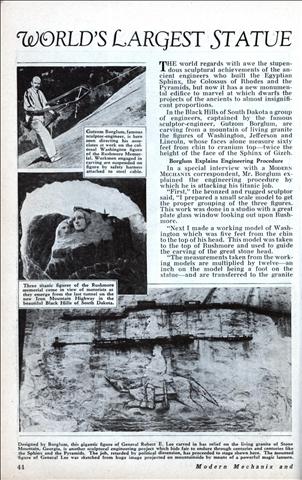 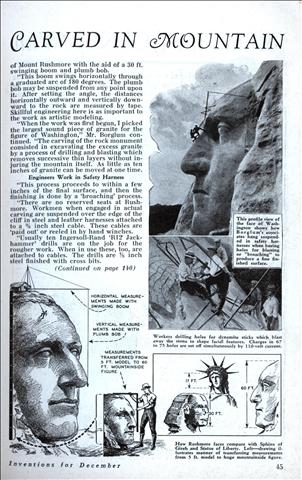 THE world regards with awe the stupendous sculptural achievements of the ancient engineers who built the Egyptian Sphinx, the Colossus of Rhodes and the Pyramids, but now it has a new monumental edifice to marvel at which dwarfs the projects of the ancients to almost insignificant proportio 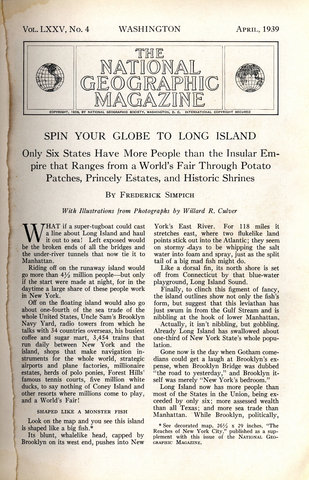 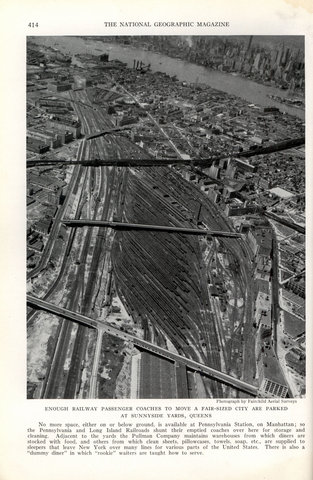 SPIN YOUR GLOBE TO LONG ISLAND

Only Six States Have More People than the Insular Empire that Ranges from a World’s Fair Through Potato Patches, Princely Estates, and Historic Shrines

By Frederick Simpich
With Illustrations from Photographs by Willard R. Culver

WHAT if a super-tugboat could cast a line about Long Island and haul it out to sea! Left exposed would be the broken ends of all the bridges and the under-river tunnels that now tie it to Manhattan.

Riding off on the runaway island would go more than 4-1/2 million people—but only if the start were made at night, for in the daytime a large share of these people work in New York.

Off on the floating island would also go about one-fourth of the sea trade of the whole United States, Uncle Sam’s Brooklyn Navy Yard, radio towers from which he talks with 34 countries overseas, his busiest coffee and sugar mart, 3,454 trains that run daily between New York and the island, shops that make navigation instruments for the whole world, strategic airports and plane factories, millionaire estates, herds of polo ponies, Forest Hills’ famous tennis courts, five million white ducks, to say nothing of Coney Island and other resorts where millions come to play, and a World’s Fair! 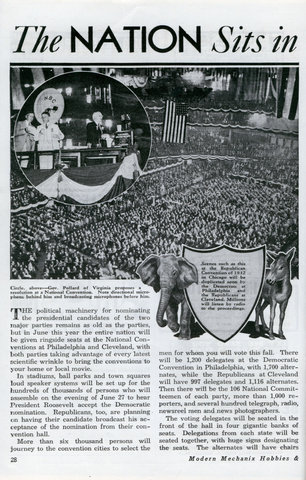 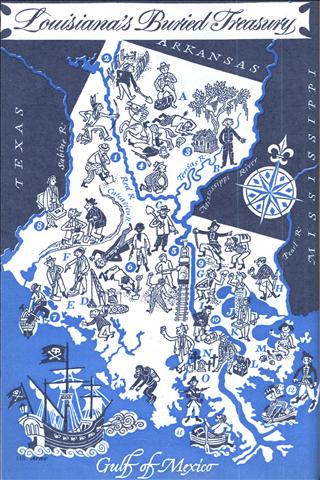 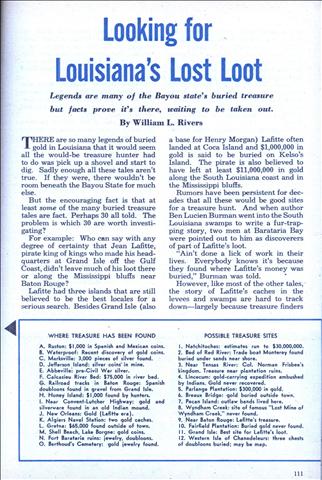 Legends are many of the Bayou state’s buried treasure but facts prove it’s there, waiting to be taken out.

THERE are so many legends of buried gold in Louisiana that it would seem all the would-be treasure hunter had to do was pick up a shovel and start to dig. Sadly enough all these tales aren’t true. If they were, there wouldn’t be room beneath the Bayou State for much else.

But the encouraging fact is that at least some of the many buried treasure tales are fact. Perhaps 30 all told. The problem is which 30 are worth investigating? 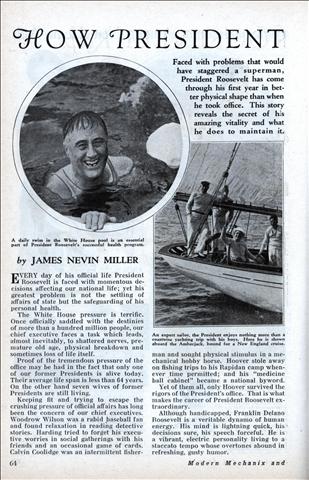 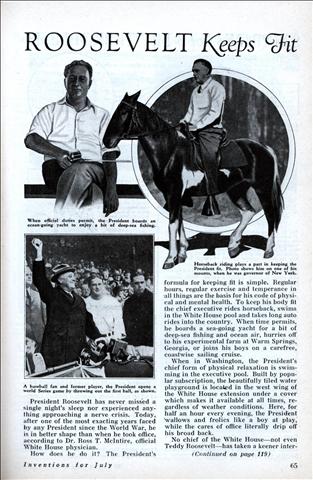 Faced with problems that would have staggered a superman. President Roosevelt has come through his first year in better physical shape than when he took office. This story reveals the secret of his amazing vitality and what he does to maintain it.

EVERY day of his official life President Roosevelt is faced with momentous decisions affecting our national life; yet his greatest problem is not the settling of affairs of state but the safeguarding of his personal health.

The White House pressure is terrific. Once officially saddled with the destinies of more than a hundred million people, our chief executive faces a task which leads, almost inevitably, to shattered nerves, premature old age, physical breakdown and sometimes loss of life itself. 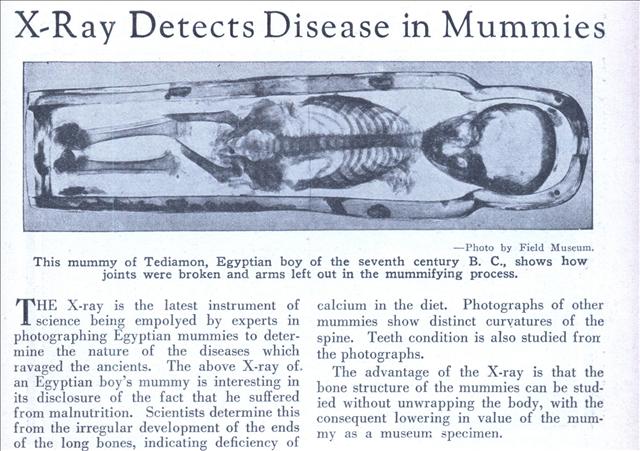 THE X-ray is the latest instrument of science being empolyed by experts in photographing Egyptian mummies to determine the nature of the diseases which ravaged the ancients. The above X-ray of an Egyptian boy’s mummy is interesting in its disclosure of the fact that he suffered from malnutrition. Scientists determine this from the irregular development of the ends of the long bones, indicating deficiency of calcium in the diet. Photographs of other mummies show distinct curvatures of the spine. Teeth condition is also studied fron the photographs.

The advantage of the X-ray is that the bone structure of the mummies can be studied without unwrapping the body, with the consequent lowering in value of the mum-my as a museum specimen. 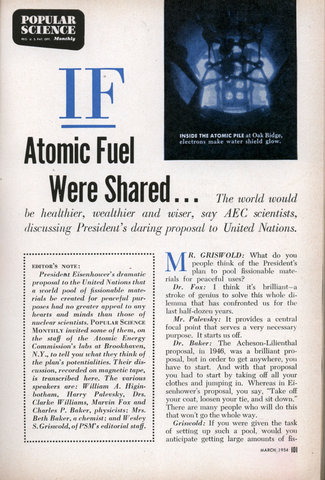 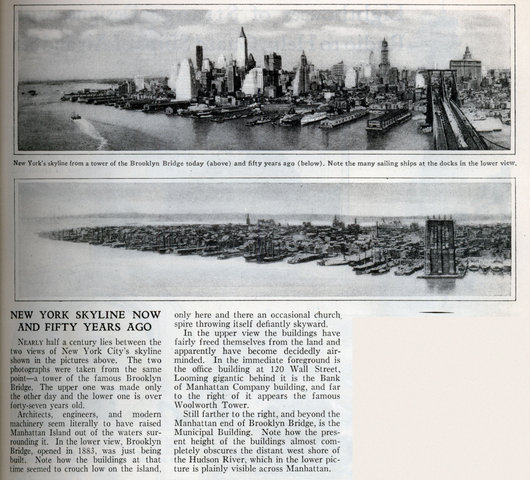