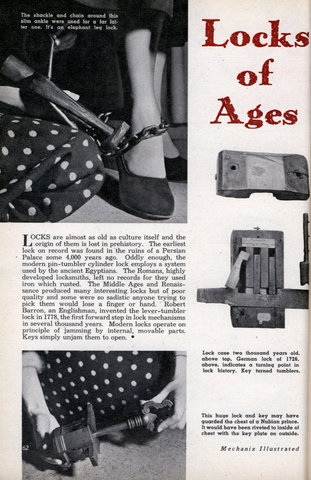 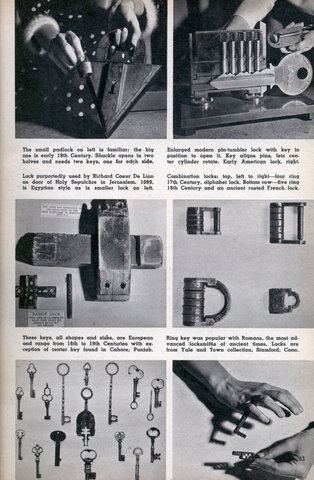 LOCKS are almost as old as culture itself and the origin of them is lost in prehistory. The earliest lock on record was found in the ruins of a Persian Palace some 4,000 years ago. Oddly enough, the modern pin-tumbler cylinder lock employs a system used by the ancient Egyptians. The Romans, highly developed locksmiths, left no records for they used iron which rusted. The Middle Ages and Renaissance produced many interesting locks but of poor quality and some were so sadistic anyone trying to pick them would lose a finger or hand. Robert Barron, an Englishman, invented the lever-tumbler lock in 1778, the first forward step in lock mechanisms in several thousand years. Modern locks operate on principle of jamming by internal, movable parts. Keys simply unjam them to open.

Modern Mechanix
Issue: Nov, 1934
Posted in: History, Sign of the Times
No Comments on Revising the Map of America to Save a Nation (Nov, 1934) 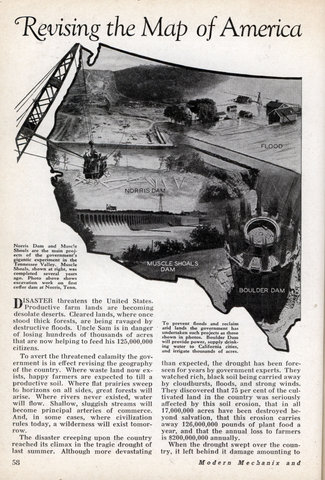 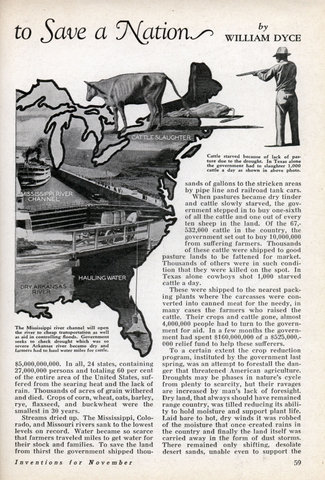 Revising the Map of America to Save a Nation

DISASTER threatens the United States. Productive farm lands are becoming desolate deserts. Cleared lands, where once stood thick forests, are being ravaged by destructive floods. Uncle Sam is in danger of losing hundreds of thousands of acres that are now helping to feed his 125,000,000 citizens.

To avert the threatened calamity the government is in effect revising the geography of the country. Where waste land now exists, happy farmers are expected to till a productive soil. Where flat prairies sweep to horizons on all sides, great forests will arise. Where rivers never existed, water will flow. Shallow, sluggish streams will become principal arteries of commerce. And, in some cases, where civilization rules today, a wilderness will exist tomorrow.

These stories are always the same: bold white explorers set out on a quest with local guides. At some point the locals will prove how cowardly and superstitious they are and the white men will have to either beat or bribe them back into shape. And oh yea, they’re not civilized like we are. They actually execute people. 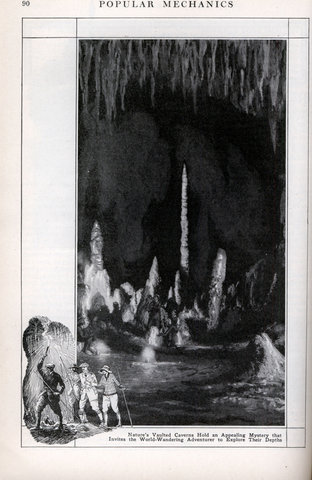 RETURNING from travels across the “no man’s lands” of the uncivilized spots of the world, hunters and explorers tell of seeing people and animals and passing through adventures so strange that they were impelled to take the evidence of them by trap or camera, even though these things did not come within the purposes of their trips.

Recently, a young member of an exploring party which had entered the forbidden regions of Tibet in Asia decided to take up the venture alone when the rest of the party turned back at one of the most dangerous points. Selecting a few native servants who declared they were brave enough to accompany and assist him, he resumed the journey through precarious wilds. 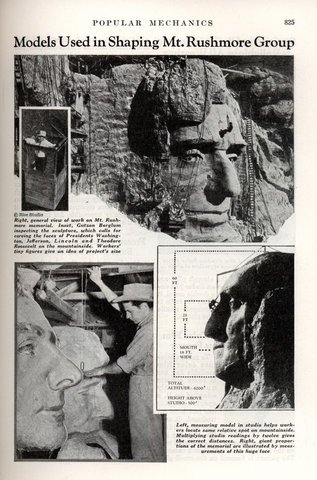 Right, general view of work on Mt. Rush-more memorial. Inset, Gutzon Borglum inspecting the sculpture, which calls for carving the faces of Presidents Washington, Jefferson, Lincoln and Theodore Roosevelt on the mountainside. Workers’ tiny figures give an idea of project’s size

Apparently our country has a long and not-so-proud history of exploiting cheap Chinese labor. “Sure we could use our loading equipment, but it’s so much easier and cheaper to have the coolies do it by hand!” 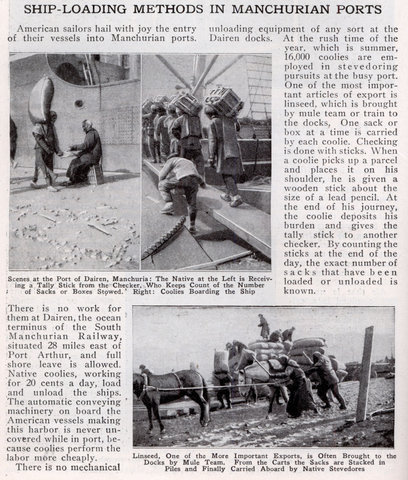 American sailors hail with joy the entry of their vessels into Manchurian ports.

There is no work for them at Dairen, the ocean terminus of the South Manchurian Railway, situated 28 miles east of Port Arthur, and full shore leave is allowed. Native coolies, working for 20 cents a day, load and unload the ships. The automatic conveying machinery on hoard the American vessels making this harbor is never uncovered while in port, because coolies perform the labor more cheaply. 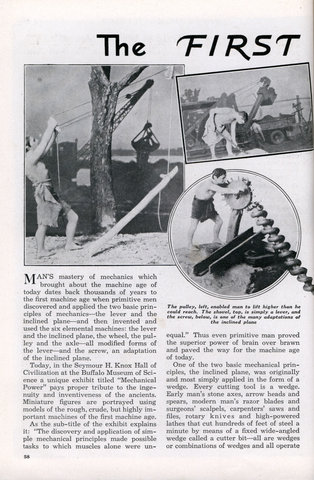 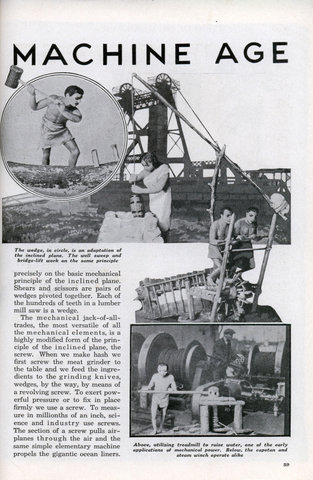 Today, in the Seymour H. Knox Hall of Civilization at the Buffalo Museum of Science a unique exhibit titled “Mechanical Power” pays proper tribute to the ingenuity and inventiveness of the ancients. Miniature figures are portrayed using models of the rough, crude, but highly important machines of the first machine age. As the sub-title of the exhibit explains it: “The discovery and application of simple mechanical principles made possible tasks to which muscles alone were unequal.” Thus even primitive man proved the superior power of brain over brawn and paved the way for the machine age of today. 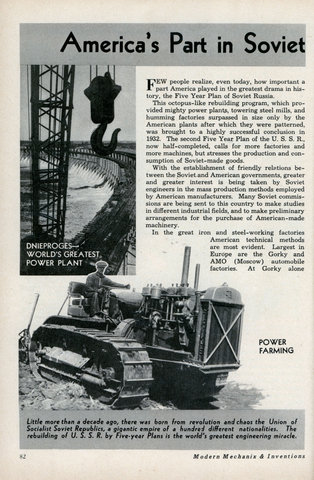 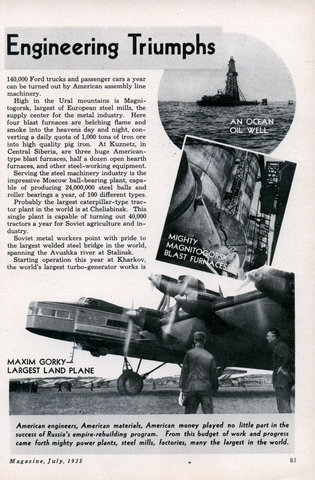 FEW people realize, even today, how important a part America played in the greatest drama in history, the Five Year Plan of Soviet Russia.

This octopus-like rebuilding program, which provided mighty power plants, towering steel mills, and humming factories surpassed in size only by the American plants after which they were patterned, was brought to a highly successful conclusion in 1932. The second Five Year Plan of the U. S. S. R., now half-completed, calls for more factories and more machines, but stresses the production and consumption of Soviet-made goods. 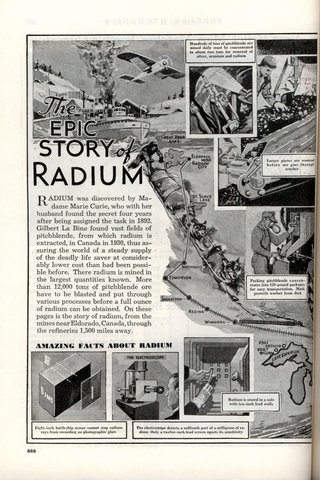 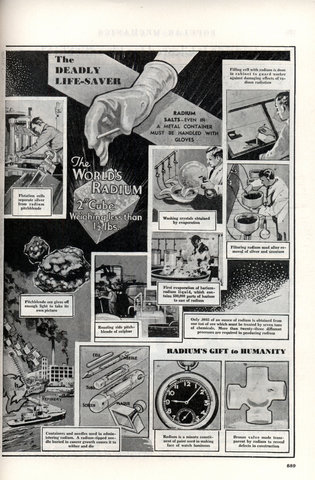 The Epic Story of Radium
RADIUM was discovered by Madame Marie Curie, who with her husband found the secret four years after being assigned the task in 1892. Gilbert La Bine found vast fields of pitchblende, from which radium is extracted, in Canada in 1930, thus assuring the world of a steady supply of the deadly life saver at considerably lower cost than had been possible before. There radium is mined in the largest quantities known. More than 12,000 tons of pitchblende ore have to be blasted and put through various processes before a full ounce of radium can be obtained. On these pages is the story of radium, from the mines near Eldorado, Canada, through the refineries 1,500 miles away.

President Roosevelt’s personal plane which is in reality a specially designed Douglas C-54, was used by the late Chief Executive on several historic trips. Elevator made it possible for him to come aboard in his wheelchair easily.

Popular Science
Issue: May, 1945
Posted in: Automotive, History, Origins
2 Comments on THIS WAS GERMANY’S FLIVVER (May, 1945) 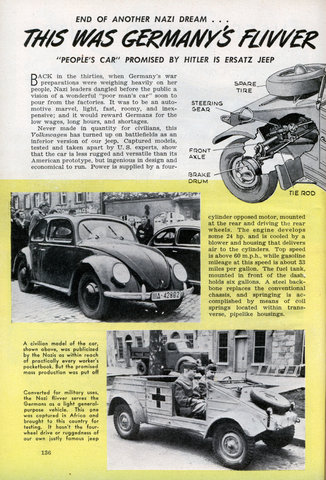 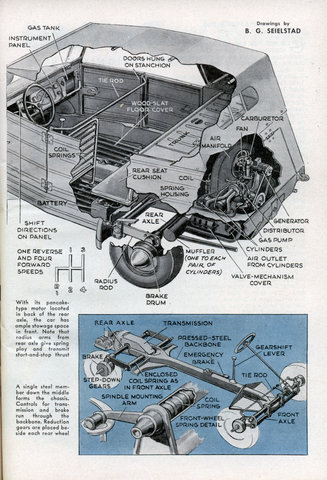 END OF ANOTHER NAZI DREAM . . .
THIS WAS GERMANY’S FLIVVER
“PEOPLE’S CAR” PROMISED BY HITLER IS ERSATZ JEEP

BACK in the thirties, when Germany’s war preparations were weighing heavily on her people, Nazi leaders dangled before the public a vision of a wonderful “poor man’s car” soon to pour from the factories. It was to be an automotive marvel, light, fast, roomy, and inexpensive; and it would reward Germans for the low wages, long hours, and shortages.