Popular Science
Issue: Jun, 1970
Posted in: Communications, Computers, Television
No Comments on CATV Is Coming to Your Town (Jun, 1970)

The last sentence is the kicker: “Some experts are predictingâ€”for less than the cost of the family carâ€” a complete home communications terminal with access to computer libraries, two-way video, and hundreds of input channels. Cable TV could make it all come true. ” 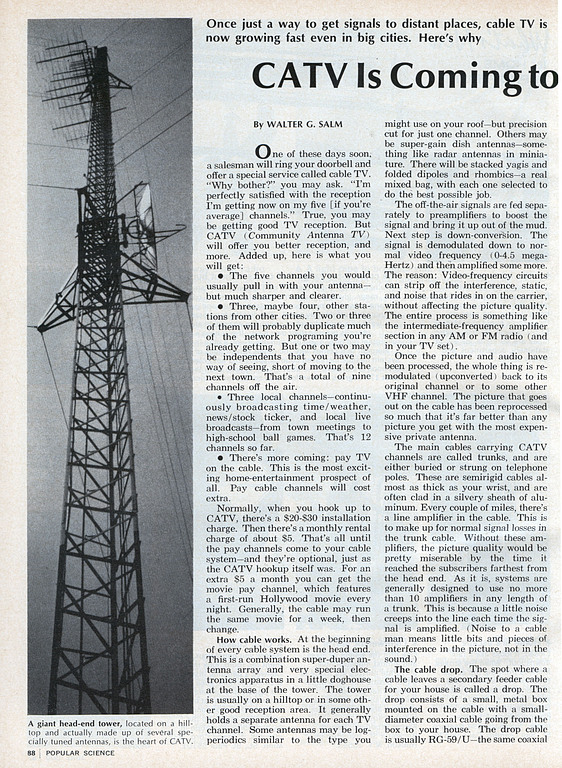 Once just a way to get signals to distant places, cable TV is now growing fast even in big cities. Here’s why

CATV Is Coming to Your Town

One of these days soon, a salesman will ring your doorbell and offer a special service called cable TV. “Why bother?” you may ask. “I’m perfectly satisfied with the reception I’m getting now on my five [if you’re average] channels.” True, you may be getting good TV reception. But CATV (Community Antenna TV) will offer you better reception, and more. Added up, here is what you will get:

â€¢ The five channels you would usually pull in with your antennaâ€” but much sharper and clearer.

â€¢ Three, maybe four, other stations from other cities. Two or three of them will probably duplicate much of the network programing you’re already getting. But one or two may be independents that you have no way of seeing, short of moving to the next town. That’s a total of nine channels off the air.

â€¢ There’s more coming: pay TV on the cable. This is the most exciting home-entertainment prospect of all. Pay cable channels will cost extra.

Normally, when you hook up to CATV, there’s a $20-$30 installation charge. Then there’s a monthly rental charge of about $5. That’s all until the pay channels come to your cable systemâ€”and they’re optional, just as the CATV hookup itself was. For an extra $5 a month you can get the movie pay channel, which features a first-run Hollywood movie every night. Generally, the cable may run the same movie for a week, then change.

How cable works. At the beginning of every cable system is the head end. This is a combination super-duper antenna array and very special electronics apparatus in a little doghouse at the base of the tower. The tower is usually on a hilltop or in some other good reception area. It generally holds a separate antenna for each TV channel. Some antennas may be log-periodics similar to the type you might use on your roofâ€”but precision cut for just one channel. Others may be super-gain dish antennasâ€”something like radar antennas in miniature. There will be stacked yagis and folded dipoles and rhombicsâ€”a real mixed bag, with each one selected to do the best possible job.

The off-the-air signals are fed separately to preamplifiers to boost the signal and bring it up out of the mud. Next step is down-conversion. The signal is demodulated down to normal video frequency (0-4.5 mega-Hertz ) and then amplified some more. The reason: Video-frequency circuits can strip off the interference, static, and noise that rides in on the carrier, without affecting the picture quality. The entire process is something like the intermediate-frequency amplifier section in any AM or FM radio I and in your TV set).

Once the picture and audio have been processed, the whole thing is re-modulated ( upconverted ) back to its original channel or to some other VHF channel. The picture that goes out on the cable has been reprocessed so much that it’s far better than any picture you get with the most expensive private antenna.

The main cables carrying CATV channels are called trunks, and are either buried or strung on telephone poles. These are semirigid cables almost as thick as your wrist, and are often clad in a silvery sheath of aluminum. Every couple of miles, there’s a line amplifier in the cable. This is to make up for normal signal losses in the trunk cable. Without these amplifiers, the picture quality would be pretty miserable by the time it reached the subscribers farthest from the head end. As it is, systems are generally designed to use no more than 10 amplifiers in any length of a trunk. This is because a little noise creeps into the line each time the signal is amplified. (Noise to a cable man means little bits and pieces of interference in the picture, not in the sound.)

The cable drop. The spot where a cable leaves a secondary feeder cable for your house is called a drop. The drop consists of a small, metal box mounted on the cable with a small-diameter coaxial cable going from the box to your house. The drop cable is usually RG-59/Uâ€”the same coaxial cable people use in their antenna lines instead of the usual twin-lead ribbon. The cable is an unbalanced lineâ€”one conductor (the outer shield) is grounded while the inner conductor is “hot.” Co-ax has an impedance of 75 ohms. Flat twin lead is a balanced lineâ€”neither side is at ground potentialâ€”and has a 300-ohm impedance. Most TV sets have an antenna impedance of 300 ohms to match the more common 300-ohm twin lead. To connect the CATV co-ax to your TV set, a tiny transformer is used right at the antenna terminals.

Big-city problems. In New York City and other large cities, the picture problems aren’t due to poor signal strength but to the many reflections and shadows from tall buildings. Pictures come in with interference lines, triple ghosts, hash, interference stripes, and assorted other ailments. There may be plenty of signal strength on channel 2, but the picture looks awful. Now, suppose a cable system pumps in this station on the same channel 2. There’s so much signal in the air that it will be picked up by the TV set and cause serious interference with the signal on the cable. This is where the set-top converter comes in. Back at the head end, the electronic gear doesn’t re-modulate the picture back to its original channel. Instead, it puts the picture on a much lower frequency, below the TV band, or even up in the low end of the UHF band. To pick out the channel, a small converter on top of the TV set is used. This device has one or two selector knobs on it and sends a new signal to the TV set’s antenna terminals.

A single-knob converter will have 12 channels numbers on it along with a few lettered channelsâ€”channels A, B, C, D, etc. Many of these converters have as many as 20 channels indicated on them. And some CATV systems actually deliver 20 channels or more! Generally, all systems in big cities, and any systems with more than 12 channels, must have a converter on top of each subscriber’s TV set. There’s at least one converter that attaches to the rear of the TV set and lets you use the UHF tuner to select the channels. But UHF tuners don’t have the click-stop pre-tuned channels that VHF tuners and regular converters have, so tuning in is a little more difficult.

Some CATV operators offer an FM option for an extra $1 per month. Where it is available, the cable FM usually has its frequencies converted to another spot on the FM dial to avoid interference problems. But the same FM receiver is used and no converter is necessary.

The wired city. Eventually, a large part of the country will get its TV programs from cables instead of antennas. Entire citiesâ€”big and small-will be wired for TV. Many small communities are entirely cabled now, and others are following every day.

What usually happens is that some large cable operator or hardware manufacturer presents a proposal to a town that’s ripe for cable. There may be three or four such proposals submitted at about the same time.

The successful applicant has to make several concessions to the municipal government. For one thing, he pays a tax of five to eight percent of gross revenues. He has to provide two-way cable to schools and municipal buildings so programs can originate there for the local channel. This is made easier by some new hardwareâ€”two-way line amplifiers that handle TV signals going in either direction on the trunk cable.

The Federal Communications Commission regulates CATV, but there’s still no firm body of rules, and the commission is still trying to make up its mind what to do. Final word is still with the local municipality that grants the franchise.

Super-service on the way. Cable means more service from your TV set, but entertainment isn’t the only use for the cable. Right now, TV programing is what gets the cable into your house. Five years from now, or even sooner, other special services like TV shopping will be added. This lets your wife watch the latest sales at her favorite shop on TV, so she can call and order what she sees on the tube. Soon, she won’t even have to callâ€”just press some buttons on a touch-tone data set near the TV set.

Fire and burglar alarms that tie in directly to police and fire stations are also high on the CATV priority list. Cable will usher in an era of the electronic facsimile machine.

In congested cities that have no more room for underground cables, short-hop millimeter-wave microwave beams will carry CATV channels to major building groups cheaper and easier than trunk feeders could. And entertainment opportunities will multiply a thousandfold as more distant signals are imported by microwave and domestic satellites make CATV networks possible. Eventually, some UHF TV stations may go off the air, turning instead to the cable. Ultimately, if all UHF stations vacate their over-the-air transmission, the FCC will be able to re-allocate those frequencies for much needed communications use. The VHF stations will stay on the air to reach those people not touched by cableâ€”the portable TV at the beach, remote rural locations, and even the back seats of limousines.

Channels by the hundreds. By 1990, according to a recent analysis by Nathaniel Feldman of the Rand Corporation, each U.S. “neighborhood” with an average of 2,000 subscribers could support its own cable TV center with an astounding 100 to 400 channels on tap.

What would your town or neighborhood do with that many channels? First, the regular 13 channels of programs could be repeated at different times of the day on other channels, so that you would never have to miss your favorite show. This could account for 100 channels. Scores of lecture classes for students and the general public could be scheduled. Professionals could keep up with their specialties by viewing special courses. A local rock group could put themselves on the air at a cost of perhaps $20 an hour. Local affairs could be covered with an intensity to delight any politician’s heart.

Some experts are predictingâ€”for less than the cost of the family carâ€” a complete home communications terminal with access to computer libraries, two-way video, and hundreds of input channels. Cable TV could make it all come true.