Chicago to Have World’s Most Powerful Aerial Beacon (Jul, 1930) 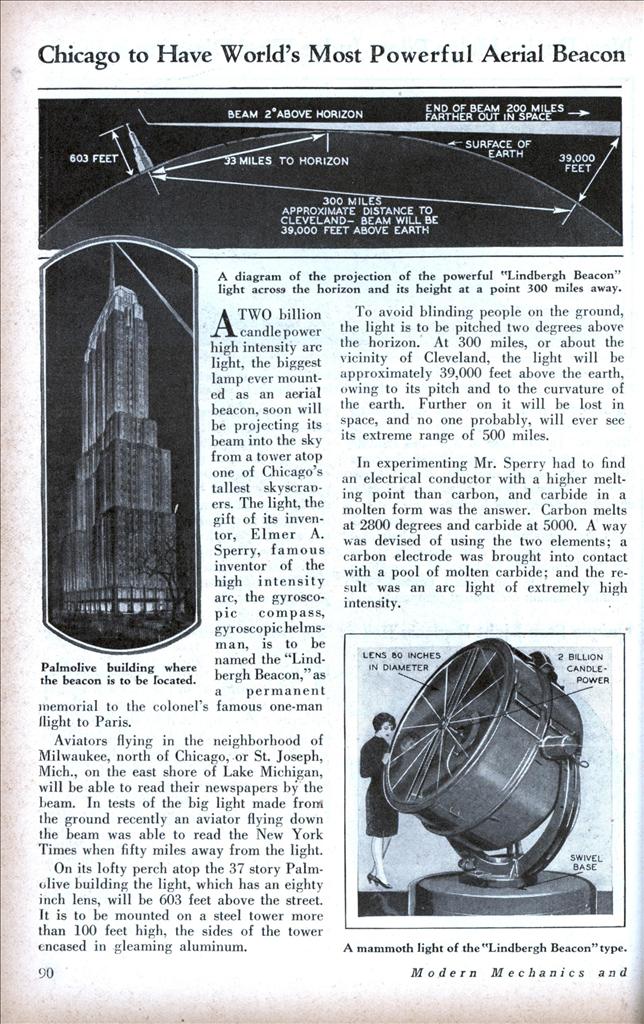 Chicago to Have World’s Most Powerful Aerial Beacon

A TWO billion candle power high intensity arc light, the biggest lamp ever mounted as an aerial beacon, soon will be projecting its beam into the sky from a tower atop one of Chicago’s tallest skyscrapers. The light, the gift of its inventor, Elmer A. Sperry, famous inventor of the high intensity arc, the gyroscopic compass, gyroscopic helms-man, is to be named the “Lindbergh Beacon,” as a permanent memorial to the colonel’s famous one-man flight to Paris.

Aviators flying in the neighborhood of Milwaukee, north of Chicago, or St. Joseph, Mich., on the east shore of Lake Michigan, will be able to read their newspapers by the beam. In tests of the big light made from the ground recently an aviator flying down The beam was able to read the New York Times when fifty miles away from the light.

On its lofty perch atop the 37 story Palm-olive building the light, which has an eighty inch lens, will be 603 feet above the street. It is to be mounted on a steel tower more than 100 feet high, the sides of the tower encased in gleaming aluminum.

To avoid blinding people on the ground, the light is to be pitched two degrees above the horizon. At 300 miles, or about the vicinity of Cleveland, the light will be approximately 39,000 feet above the earth, owing to its pitch and to the curvature of the earth. Further on it will be lost in space, and no one probably, will ever see its extreme range of 500 miles.

In experimenting Mr. Sperry had to find an electrical conductor with a higher melting point than carbon, and carbide in a molten form was the answer. Carbon melts at 2800 degrees and carbide at 5000. A way was devised of using the two elements; a carbon electrode was brought into contact with a pool of molten carbide; and the result was an arc light of extremely high intensity.