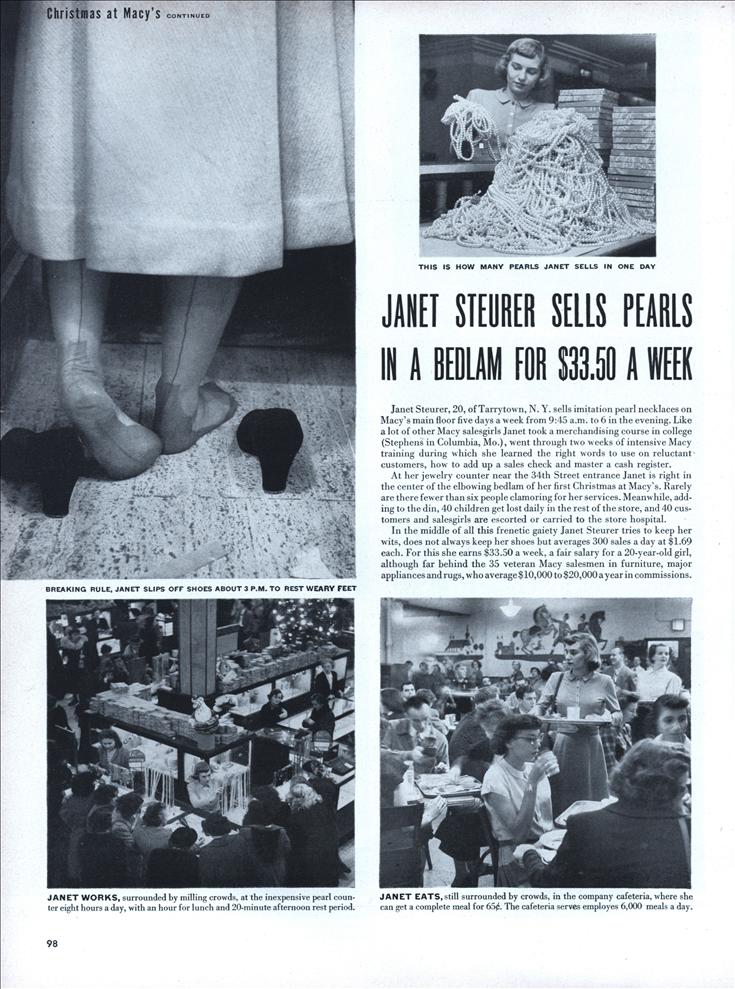 As becomes the world’s largest store, it is prodigious, furious and for cash only In the last four weeks before Christmas, R. H. Macy of New York, the world’s largest store, goes through a kind of retailing blitz. On the day after its Thanksgiving parade (opposite page), which initiates New York’s Christmas season, an augmented staff of more than 14,000 sets furiously to work to sell everything in sight to an average 250,000 daily customers.

Macy’s is not merely the physically biggest store in the world, selling the greatest variety of items (400,000); it is also the world’s largest drugstore, bookstore, furniture store, liquor store, fabric and china store, for its departments handling these items all under one roof are bigger than any other store specializing in them.

The author of this implausible reality was Rowland Hussey Macy, a Nantucket whaler who believed money could be made in dry goods by advertising aggressively and selling for cash only. Macy tried these theories in Boston, failed, tried in San Francisco, failed again and failed a third time in Haverhill, Mass. Undaunted but by now a dangerous credit risk, he opened another dry goods store, this time in New York. It was a success from the start and grew enormously. After Macy’s death the greatly expanded store passed into the hands of the Straus family, long-time Macy associates. Strauses still run it (next page) but with marvelous fidelity to the original Macy policies. For Macy’s, now 90 years old, still sells for cash only, sells all items that are not price fixed (at least 85% of its stock) for at least 6% under its competitors’ prices (and has its own way of getting around price-fixed items), changes the price on a single item as many as five times in 12 days to meet competition. Since it won’t open a charge account for anybody, Macy’s has evolved the Macy Bank, in which customers deposit money and then draw against it as they buy. This unique device currently has $9 million of customers’ money on deposit. Macy’s still advertises and promotes exuberantly; at various times it has installed a complete barnyard and a ski slide within the store to help sell livestock and ski equipment. All this multifarious activity helps to sell a stock which ranges from Crosleys to church organs, from fresh Italian cheeses to genuine Regency backgammon boards. During the current Christmas season, largest in Macy history, that stock is being purchased at the rate of more than a million dollars a day—every cent of it paid for in cash.

JANET STEURER SELLS PEARLS IN A BEDLAM FOR $33.50 A WEEK

Janet Steurer, 20, of Tarrytown, N. Y. sells imitation pearl necklaces on Macy’s main floor five days a week from 9:45 a.m. to 6 in the evening. Like a lot of other Macy salesgirls Janet took a merchandising course in college (Stephens in Columbia, Mo.), went through two weeks of intensive Macy training during which she learned the right words to use on reluctant customers, how to add up a sales check and master a cash register.

At her jewelry counter near the 34th Street entrance Janet is right in the center of the elbowing bedlam of her first Christmas at Macy’s. Rarely are there fewer than six people clamoring for her services. Meanwhile, adding to the din, 40 children get lost daily in the rest of the store, and 40 customers and salesgirls are escorted or carried to the store hospital.

In the middle of all this frenetic gaiety Janet Steurer tries to keep her wits, does not always keep her shoes but averages 300 sales a day at $1.69 each. For this she earns $33.50 a week, a fair salary for a 20-year-old girl, although far behind the 35 veteran Macy salesmen in furniture, major appliances and rugs, who average $ 10,000 to $20,000 a year in commissions.