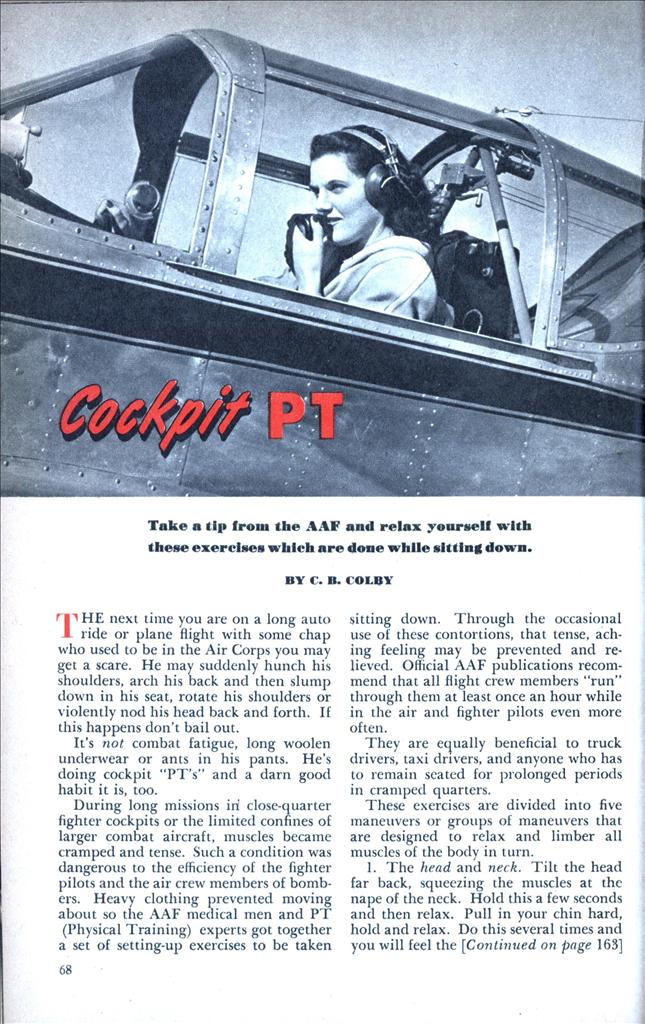 Take a tip from the AAF and relax yourself with these exercises which are done while sitting down.

THE next time you are on a long auto ride or plane flight with some chap who used to be in the Air Corps you may get a scare. He may suddenly hunch his shoulders, arch his back and then slump down in his seat, rotate his shoulders or violently nod his head back and forth. If this happens don’t bail out.

It’s not, combat fatigue, long woolen underwear or ants in his pants. He’s doing cockpit “PT’s” and a darn good habit it is, too.

During long missions in close-quarter fighter cockpits or the limited confines of larger combat aircraft, muscles became cramped and tense. Such a condition was dangerous to the efficiency of the fighter pilots and the air crew members of bombers. Heavy clothing prevented moving about so the AAF medical men and PT (Physical Training) experts got together a set of setting-up exercises to be taken sitting down. Through the occasional use of these contortions, that tense, aching feeling may be prevented and relieved. Official AAF publications recommend that all flight crew members “run” through them at least once an hour while in the air and fighter pilots even more often.

They are equally beneficial to truck drivers, taxi drivers, and anyone who has to remain seated for prolonged periods in cramped quarters.

These exercises are divided into five maneuvers or groups of maneuvers that are designed to relax and limber all muscles of the body in turn.

1. The head and neck. Tilt the head far back, squeezing the muscles at the nape of the neck. Hold this a few seconds and then relax. Pull in your chin hard, hold and relax. Do this several times and you will feel the stiffness and tenseness leaving the cords of the neck. Turn the head far to the right and repeat to the left and then rotate the head about the shoulders.

2. Next the shoulders. Shrug ’em hard. Raise them high and hold them there. Drop them and do it again. Rotate them forward and then backwards. Do this together and singly. You’ll feel the blood getting back into those tense tendons and muscles.

3. Now the back. Arch it, heard, and hold it there for a few seconds. Slump it hard and hold it. Do it several times. Your spine may sound and feel like a xylophone when you first do it after a long tense stretch of sitting rigid, but it will take those kinks out in jig time.

4. Now arms, abdomen and buttocks. Clench your fists and open them wide, bending the fingers back as far as possible. Wiggle your fingers as though playing the piano and you’ll feel the tendons in your forearm moving. Pull in your abdomen, hold it and relax. Extend it and then back again in tightly to loosen your belt for a few moments. Tighten the muscles of your buttocks. Hold rigid and relax. Rotate your body on them in your seat. Press lower back hard against the seat back. Relax and then press back again. Relieving the tension of the lower back and buttocks caused by long periods of sitting, stimulates the circulation to the feet and legs. This helps prevent cold feet as well as relieving the tension in their muscles.

5. The legs have their own exercises. Tighten the muscles of your thighs as hard as you can and hold it before relaxing. Repeat several times. Now press your knees together tightly and squeeze. Repeat and relax after holding them tightly together for several seconds. Point your toes downward violently and then point them up. This latter exercise not only relieves tension in the ankles but will thoroughly exercise the calf muscles, so important to control of the rudder pedals in flying.

Several of these exercises may be combined but we can’t be responsible for the result if you do them all at once. We have tried these on long flights to relieve the monotony as well as keep the carcas limber and they do the trick to a Tee. A long drive in the car is a good proving ground for the efficiency of the system, too.