Popular Electronics
Issue: May, 1956
Posted in: Computers
No Comments on COMPUTER with MEMORY Speeds Inventory (May, 1956)

COMPUTER with MEMORY Speeds Inventory (May, 1956) 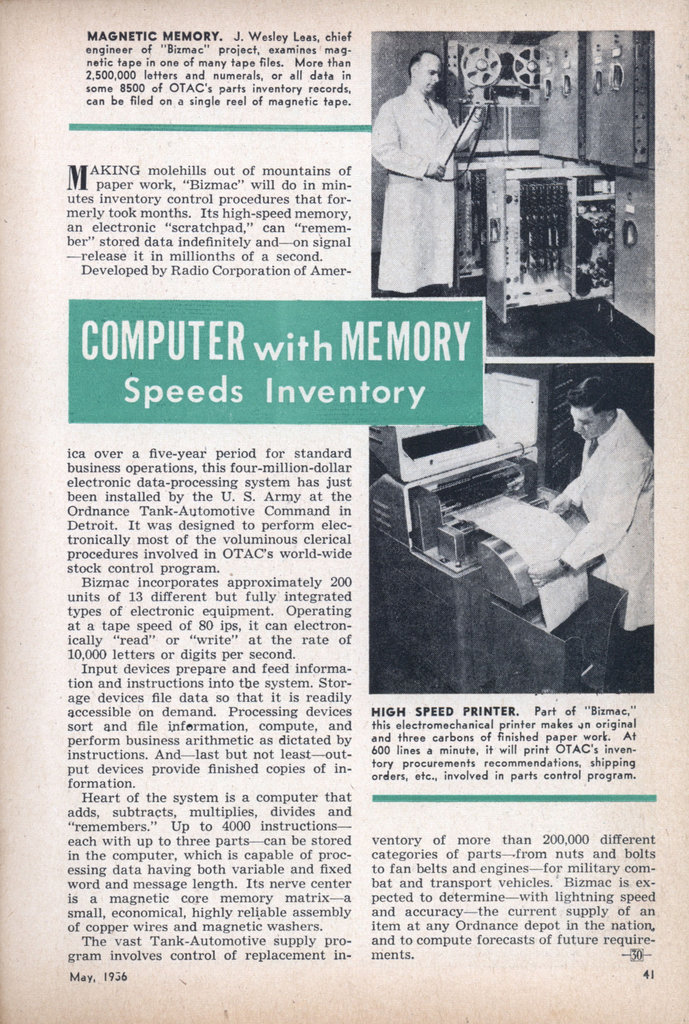 MAKING molehills out of mountains of paper work, “Bizmac” will do in minutes inventory control procedures that formerly took months. Its high-speed memory, an electronic “scratchpad,” can “remember” stored data indefinitely andâ€”on signal â€”release it in millionths of a second.

Developed by Radio Corporation of America over a five-year period for standard business operations, this four-million-dollar electronic data-processing system has just been installed by the U. S. Army at the Ordnance Tank-Automotive Command in Detroit. It was designed to perform electronically most of the voluminous clerical procedures involved in OTAC’s world-wide stock control program.

Bizmac incorporates approximately 200 units of 13 different but fully integrated types of electronic equipment. Operating at a tape speed of 80 ips, it can electronically “read” or “write” at the rate of 10,000 letters or digits per second.

Input devices prepare and feed information and instructions into the system. Storage devices file data so that it is readily accessible on demand. Processing devices sort and file information, compute, and perform business arithmetic as dictated by instructions. Andâ€”last but not leastâ€”output devices provide finished copies of information.

Heart of the system is a computer that adds, subtracts, multiplies, divides and “remembers.” Up to 4000 instructionsâ€” each with up to three partsâ€”can be stored in the computer, which is capable of processing data having both variable and fixed word and message length. Its nerve center is a magnetic core memory matrixâ€”a small, economical, highly reliable assembly of copper wires and magnetic washers.

The vast Tank-Automotive supply program involves control of replacement inventory of more than 200,000 different categories of parts – from nuts and bolts to fan belts and enginesâ€”for military combat and transport vehicles. Bizmac is expected to determineâ€”with lightning speed and accuracyâ€”the current supply of an item at any Ordnance depot in the nation, and to compute forecasts of future requirements.