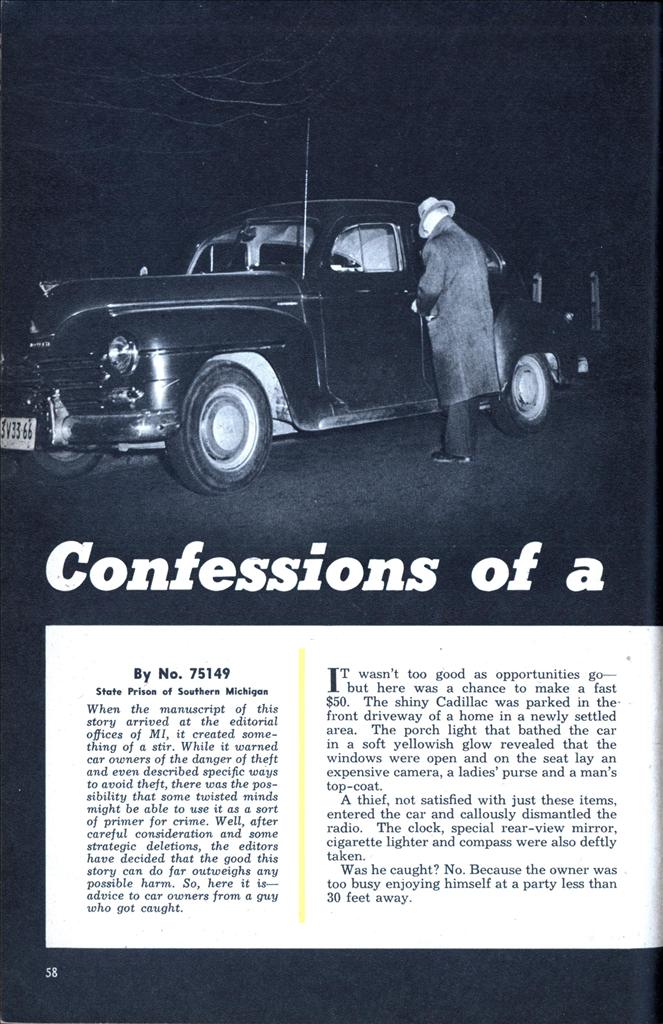 IT wasn’t too good as opportunities go— but here was a chance to make a fast $50. The shiny Cadillac was parked in the front driveway of a home in a newly settled area. The porch light that bathed the car in a soft yellowish glow revealed that the windows were open and on the seat lay an expensive camera, a ladies’ purse and a man’s top-coat.

A thief, not satisfied with just these items, entered the car and callously dismantled the radio. The clock, special rear-view mirror, cigarette lighter and compass were also deftly taken.

Was he caught? No. Because the owner was too busy enjoying himself at a party less than 30 feet away.

An isolated instance? Not at all—it happens every day. There were almost 200,000 thefts of cars last year and over a million cases of larceny, many involving thefts from cars. I am as much surprised as anyone to read those figures and I’m an ex-car thief myself. This is big business, breaking into cars and stealing your belongings.

A fellow inmate once told me that cars were the stepping stones to crime. As an example, just walk around for a short while. You’re bound to find several cars that not only have the windows open or the doors unlocked but have something of value carelessly left in plain view on the seat. The streets of America present a veritable Shangri-La for the car thief and pilferer.

Once, in my criminal days, a group of us banded together to increase our income from crime. We held bull sessions and talked over ways to overcome the obstacles we met.

Jimmy, a nice looking lad from a good neighborhood, had a new gimmick—new to him anyway. “We’ve just been taking the milk that’s easy to get,” he said. “These will help us to get some of the cream that’s locked up.”

He held up two innocuous tools. They looked like screw drivers to me but somehow they were different. Both were thin and flat, yet they were well tempered and strong. I noticed that as I handled them. The first had a spade-shaped blade on the end. It was used to pry open the wing ventilator and to press in the lock release button at the same time, if the car had one. The other had a curved hook on its end. “You use this to lift up the handle after the button’s pushed in,” Jimmy said. “From then on, it’s a cinch—just reach in and open the door.” So, I saw that an innocent screw driver can lead a Jekyll-Hyde existence. .

The gang was getting wise. Already they had learned the value of watching for cars with vents closed but not locked. They knew enough to look for a small crack that let air in to ventilate a locked car and the lock button that stood high on the window indicating the door was unlocked.

Al remarked one night that a salesman, who worked for an electrical appliance store, never closed his garage doors. The boys went out and scouted that particular neighborhood. The next day’s papers reported that the salesman had lost $250 worth of appliances. Three other car owners had lost radios, heaters and other accessories and personal items from their automobiles.

Jimmy told about one of the jobs. “The garage doors were open just like you guys said but the jerk had locked the car. I thought I was stumped until I noticed the back window was rolled down about half an inch. So, I just took the wire and opened the door from the inside. The guy must have been on a picnic. There was a bunch of stuff in there—a portable radio, too. What a beaut.” He held it up for our inspection.

The wire was an old wire coat hanger, straightened out with a circular loop at one end and a sort of handle formed by the wire at the other. I asked Jimmy what he would have done if the door handle had to be pressed down instead of lifted up to open the door. “That’s easy,” he replied. “I would have put the loop around the window crank and then rolled the window down by manipulating the wire.”

The car thief has his art down to a science now. A new gadget that seems to be coming into popular use is made from a six-volt door buzzer. It looks like a gun but has a thin steel plate extending about two inches straight out from its box-like handle. Above this plate is a very strong, thin steel wire which is vibrated by the buzzer. Inserted into the door lock and operated by dry cells carried either in the pocket or in a brief case, the tumblers of the lock rapidly vibrate up and down and a gradual turning pressure is exerted through the narrow steel plate. It is only a matter of a few short moments and most locks will give in to the confused juggling of their tumblers.

Every day, perplexed-looking car owners walk into police stations. “I don’t see how anyone could have stolen the car. It was locked and I have the keys right here,” they say dangling a key case in evidence. How was the car stolen? Well, there are several ways it could have been accomplished.

Starting a car engine without the keys really isn’t difficult. In fact, the manufacturers are making it easier year by year. Paper clips, jumper wires and entire units containing a coil and the necessary wiring are used. The method is found in elementary electricity— all that is needed is the simple completion of a circuit.

Some of the newer cars have complicated switches with the starter being operated only when the key is turned past a certain point. Or they have the starter button wired to the ignition switch and the starters will not work unless the ignition is turned on (at least, that’s what it says in the service manuals). A paper clip solves the problem. There are few car thieves who do not know the paper clip’s utility. But Figure 5 on page 60 does describe a way to make it quite a bit more difficult for them.

The jumper wire is simply a piece of wire about three feet long which has electrical clamps at both ends to facilitate quickly clamping it to a terminal. One end of the jumper is fastened to the primary connector on the coil, the other end may be connected to any one of several places under the hood which will supply the necessary current. The battery connections on either the voltage regulator or horn relay, the terminal on either the starter or solenoid or the hot side of the battery itself will do this. A simple snapping of the two clamps and the circuit is complete.

One day I was talking to a fellow down at a garage who told me he wasn’t worried about jumper wires—his car had an armored cable which ran from the ignition switch to the coil and ended in a cover cap on the coil which could not be removed. So I asked him how he thought a mechanic removed the coil to test or replace it. Well, the thief does it the same way—with a thin knife blade which is inserted under the lip of the cover cap and then moved around the circumference of the coil until the small spring which locks the cap in place is released. This operation takes less time than a minute for the car thief. Then, a simple turn to the left and a lift upward removes the cap leaving the prized primary connector exposed.

Some car thieves have told me they prefer to carry their own coils with them. They use high-tension coils which deliver a hot spark and are equipped with strong clips fastened to their case to clamp them on the engine or body, two wires with quick action clamps and a long, high-tension cable to deliver the current to the distributor cap.

Possibly right now a thief is casting covetous glances at your car. What can you do to stop him? Well, the main deterrent to a thief is attraction of attention to his deed. Burglar alarms employing raucous automobile horns are detailed in Figures 1, 2, 3 and 4 on page 60. Care should be taken not to overload the ignition or lighting circuits by using horns with too high amperage drains.

I do not advise the use of the horns found on Chrysler-made cars, either dual or single, since they now drain 30 amps each and prior to 1948 they had a drain of 20 to 27 amps. It is very important that you select a low drain horn since in three of the alarm systems the current passes through the ammeter before going to the horn. Excessive current flow will damage that instrument or blow a fuse, nullifying the effectiveness of the alarm.

When purchasing the wire used to connect the various switches and horns, specify 12-gauge exterior duty accessory wire. You should be able to assemble a very suitable alarm to protect your car for $5 or less.

You car owners of America must realize the temptation which you place before thieves whenever your car is left unattended. If each one of you will take all the precautions you possibly can to prevent car theft and pilferage, you’ll not only be protecting your own property but also helping some weak-willed potential thief resist the lure of easy crime. •