Sexology
Issue: Mar, 1964
Posted in: Sexuality
Tags: psychology
No Comments on CONFESSIONS of a MASOCHIST (Mar, 1964)

Really, this article is kind of boring, you’d be much better entertained reading this fantastic review of Fifty Shades of Gray.

It is interesting to see one of Lucy’s early wood cuts. I think her repressed love/hate relationship with Charlie Brown is really quite obvious here. 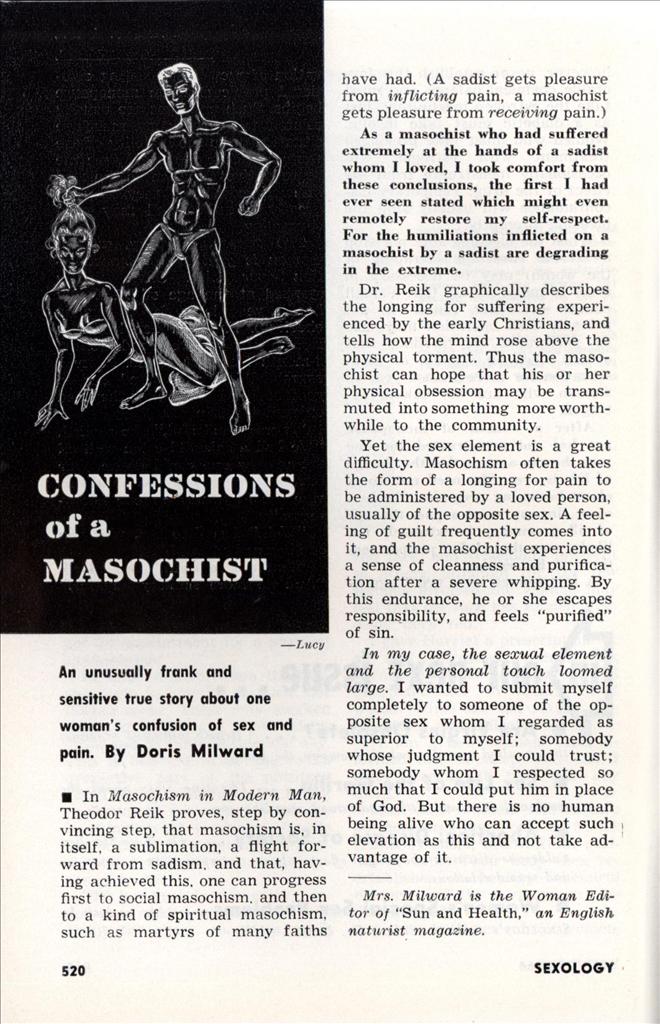 CONFESSIONS of a MASOCHIST

An unusually frank and sensitive true story about one woman’s confusion of sex and pain.

Mrs. Milward is the Woman Editor of “Sun and Health,” an English naturist magazine.

In Masochism in Modern Man, Theodor Reik proves, step by convincing step, that masochism is, in itself, a sublimation, a flight forward from sadism, and that, having achieved this, one can progress first to social masochism, and then to a kind of spiritual masochism, such as martyrs of many faiths have had. (A sadist gets pleasure from inflicting pain, a masochist gets pleasure from receiving pain.) As a masochist who had suffered extremely at the hands of a sadist whom I loved, I took comfort from these conclusions, the first I had ever seen stated which might even remotely restore my self-respect. For the humiliations inflicted on a masochist by a sadist are degrading in the extreme.

Dr. Reik graphically describes the longing for suffering experienced by the early Christians, and tells how the mind rose above the physical torment. Thus the masochist can hope that his or her physical obsession may be transmuted into something more worthwhile to the community.

Yet the sex element is a great difficulty. Masochism often takes the form of a longing for pain to be administered by a loved person, usually of the opposite sex. A feeling of guilt frequently comes into it, and the masochist experiences a sense of cleanness and purification after a severe whipping. By this endurance, he or she escapes responsibility, and feels “purified” of sin.

In my case, the sexual element and the personal touch loomed large. I wanted to submit myself completely to someone of the opposite sex whom I regarded as superior to myself; somebody whose judgment I could trust; somebody whom I respected so much that I could put him in place of God. But there is no human being alive who can accept such elevation as this and not take advantage of it.

And so, for 4 years, I was the helpless slave of a man who used me as cruelly as ever a slave in ancient times was used by her owner. Yet I hugged my bonds, and the worse he treated me, the more I loved him, if “love” is the right word to use to describe a passion so besotted.

He was many years younger than 1, and handsome. He was also intelligent and artistic. In fairness to him, 1 must state that he was not the popular conception of a sadist. He was not, and never had been, cruel to animals or children. He was not violent, or of criminal tendencies, and his behavior to his fellow men was pleasant and kindly. He was well liked.

But—there are tendencies in all of us, even the most civilized and intelligent, to revert to old jungle patterns of behavior. Deep down, in the unconscious, the old ideas persist: the law of the strong; the law that woman must submit to man, and, if necessary, must be made to submit by force and by physical punishment.

I, through some quirk in my nature, some deep, unconscious need, subscribed to this view of the ideal relationship between the sexes. And so it was largely my fault that the sadistic element was aroused in my partner.

He was my second husband, and at first, we were very happy. In the beginning, the violence in our relationship was not much more than play, as it had been with my first husband. I thought that the happiness of my first marriage was going to be repeated in my second. But my first husband was a gentle, kindly man who loved me far too much to hurt me. With him, my submission was only that of a less knowledgeable partner deferring to the guidance of a wise mentor.

The physical part was only imaginative play.

I soon found out that my second husband was of a very different character.

It started well enough. The imaginative part seemed likely to be repeated.

It was expressed in sketches and little plays. But what was at first just fun to act, and painful enough to thrill and titillate, soon became grim earnest. I found myself in very much the same position as an inmate of the German concentration camps.

Like those poor prisoners, I was forced to obey by the threat—and the use—of the whip and other implements. I was frequently bruised and battered. Yet it never occurred to me to resist, to complain to the police, or to make any but the most feeble protests to my tormentor. No, on the contrary, my reaction to his brutality was to crawl to him and to ask for more.

We lived in an isolated caravan, and saw very few people, so nobody knew of my ordeals.

In the end came the greatest humiliation of all. I didn’t revolt and cast off my bonds—he did. Tired of his willing slave, sated with his own cruelty, he left me for another woman: a woman of a very different character from mine, a woman who met him on equal terms, and refused to bow down to him.

Terribly unhappy, frustrated, tormented by my obsession, and unable to find any satisfaction, I at last sought the help of a psychiatrist.

To this wise and kindly man, skilled in unraveling the intricacies of human behavior, I owe a great deal.

Through a number of patient sessions during which he probed into the dark regions of my mind, the origin of my strange liking for pleasure through pain came to light.

It went bark to my childhood days, a childhood of repression and stern, puritanical teachings; to teachings which instilled into me such a fear of sex that I was unable to have normal relations with my husband for many years. A strange fantasy life took the place of norma! sex, and when, at last, intercourse was achieved, it was after a scene which I regarded as violent, not having any conception then of the real violence which I later experienced at the hands of my second husband.

But for my gentle first husband, that scene was violent, and the psychiatrist considered that it laid the foundation for what happened in later years. As my first experience of sex was accompanied by pain and violence, it seemed to me that it must always be so.

“Your mother instilled the feeling into your subconscious mind that sex was wrong, and so it seemed only right and proper to you that you should be punished before you could enjoy it, and punished by someone whom you could regard as having a god-like right to do so. Then, with the illogicality which governs these things, the same person could take you and use your body sexually, without your having any say in it.

“So you escaped responsibility for what you had been taught was wrong. Consciously you rejected this course of conduct long ago, but it has persisted deep down. Now you must realize this and get rid of the idea once and for all.”

It took time for this to be fully realized and brought out into the light, but once one is conscious of these hidden motives and fears, a great step forward is taken. To me, it was like coming out into a beautiful world of sunlight and clean, fresh air after languishing in a dark and noisome dungeon.

Like a prisoner who at first misses his chains after being released, I didn’t fully rejoice in my freedom for some time. But gradually I learned to take an interest in other, more wholesome occupations. The psychiatrist had encouraged me to write down my feelings and the incidents in my life which had led to my obsession, and as I had always wanted to write, I now took a course in journalism, had a few articles accepted, wrote a few stories, and a novel.

Creative work of this kind acted like magic. Another interest which helped me very much was Naturism. Sexual obsessions such as mine flourish in the dark. Sadomasochism is allied to fetishism, and the ritual of clothes and undressing is an integral part of it. For me, Naturism, with its insistence on the beauty of the human body without clothes, was a potent factor in sweeping away all that dark, unhealthy preoccupation with the more devious forms of sex, and inducing a more normal attitude in me.

Now I have a vision of life as it should be lived; of love as an equal partnership between the sexes; with, perhaps, a leaning still to the idea that the male should be the guiding partner. But now I see this as guidance only, not domination. As my psychiatrist said: “A certain amount of submission by the female to the male may be natural— one sees it all through Nature. But it should never be carried to such lengths that cruelty becomes the dominant emotion.”