Reading about this “death-ray” got me to wondering. Has anyone ever been killed by a laser? I mean directly, not someone getting blinded and crashing or something like that. 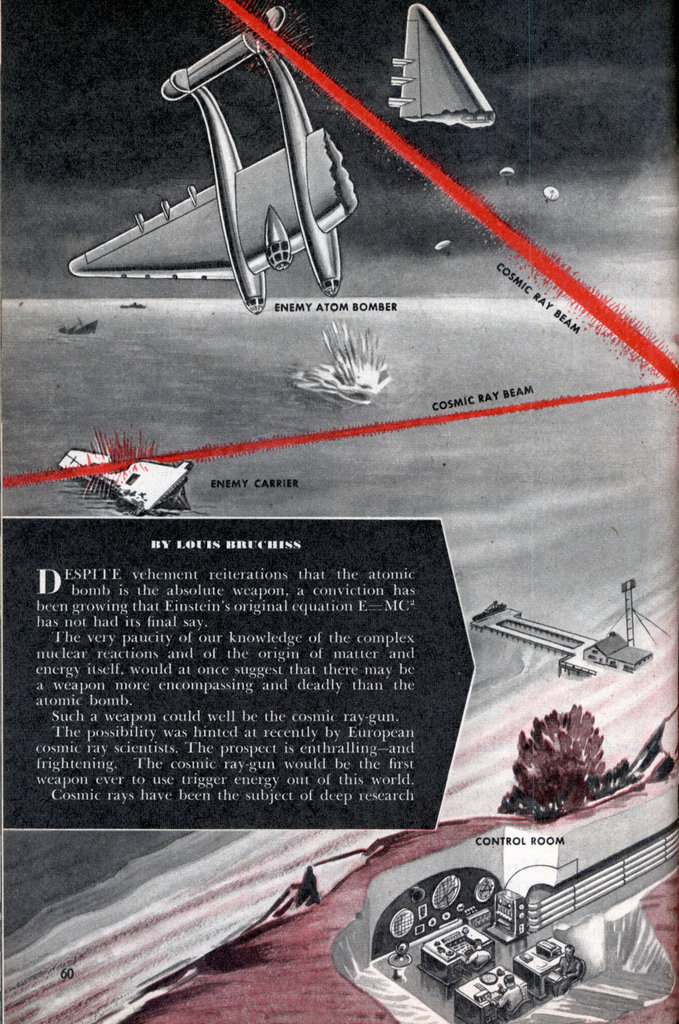 DESPITE vehement reiterations thai the atomic bomb is the absolute weapon, a conviction has been growing that Einstein’s original equation E= MC^2 has not had its final say.

The very paucity of our knowledge of the complex. nuclear reactions and of the origin of matter and energy itself, would at once suggest that there may be a weapon more encompassing and deadly than the atomic bomb.

Such a weapon could well be the cosmic ray-gun. The possibility was hinted at recently by European cosmic ray scientists. The prospect is enthrallingâ€” and frightening. The cosmic ray-gun would be the first weapon ever to use trigger energy out of this world. Cosmic rays have been the subject of deep research by investigators for the past two decades.

What are cosmic rays?

They are powerful particles of energy, originating as individual elements similar to light photons and electrons, which are shot like bullets from the vast unknown regions of interstellar space to all parts of the earth, day and night.

After entering the atmosphere at tremendous velocities, the streams of cosmic ray particles collide with the nuclei of atoms of air, bursting them apart and imparting to the particles so formed even higher velocities than the original particle had.

The particles produced through such cosmic ray-atmosphere collision are about 200 times the mass of an electron and are known as mesons.

Each minute every human being on earth is being hit and penetrated by thousands of these mesons. The individual one has measurable energies up to as much as two billion electron volts. Since the gamma rays of an atomic bomb explosion are only two million electron volts, cosmic ray energy may therefore be a thousand times greater than any produced so far on earth.

Fortunately the density and duration of life of the rays is low, far below the point where they can do harm to human beings.

But how would one go about constructing a lethal cosmic ray-gun using these mesons?

A beginning has already been made in the United States. University of California scientists, leaders in building cyclotrons and other atom smashers, have constructed an experimental “linear accelerator”â€”an atom cannon that hurls a stream of protons, the nuclei of hydrogen atoms, in a straight line instead of in the spiral orbits of the lesser energy particles of the cyclotron. This means that the apparatus will energize the atomic projectiles toward the billion electron volt mark and places them in the class of cosmic rays.

The unit is only 40 feet long and is flanked by batteries of obsolete radar sets, 15 of which are installed at equidistant spaces along the outer copper tube of the accelerator. Inside the tube is a sectioned, rifle-like barrel through which the protons are shot. As they pass each section of the inner tube they are accelerated or given a “push” by the respective high-frequency radar outfits, to finally emerge at about 40,000,000 electron volts at the muzzle.

After this initial model has been fully tested, a larger pilot model, 280 feet long, with seven 40-foot sections, will be built. To reach cosmic ray intensity it is estimated that an apparatus 1,000 feet long would be required.

Obviously this length would be impractical in modern warfare, but it is not unreasonable to suppose that still more powerful electronic energizers can be made to impart still more billions of electron volts of energy to the protons, all within the confines of gun barrels of usual length.

Once this is accomplished, we will have a usable cosmic ray-gun, the first real death ray. Such a gun could be mounted in heavy bombing planes, in controlled or satellite rockets, or on any high vantage point, and aimed at the enemy day and night. It will emit no sound and no light; and no other evidence that it is functioning will be noticeable except the clicking of radiation counters that may be put in the path of the invisible stream.

The only protection against the cosmic gun will be extremely heavy shielding. Underground shelters are again indicated. Above-ground buildings will have to be guarded with lead or other barriers. Against one type of ray â€”rare, fortunatelyâ€”it has been estimated that a thickness of as much as 75 feet of lead would be required! This particular ray has 10,000,000 times the radiation energy of the atomic bomb, according to calculations of scientists from the Barthol Foundation of the Franklin Institute.

Depending upon the energies used,individual armored suits of high-density material might be feasible.

Unlike present guns which shoot projectiles strongly subject to gravity and of limited range, the cosmic ray-gun will project a death-beam able to travel in a nearly straight line for thousands of miles. If aimed at or near sea level, they will fly straight off into space, except as they are deflected by the earth’s magnetic field or are absorbed by the earth’s atmosphere.

Because the atmosphere itself is the medium in which the mesons are created, the new gun will generate a new type of fission, producing, not the heat, blast and noise of an atomic bomb, but silent death-dealing radiation which would be extremely hard to evade.

Under radar-like sweeps from a mountain top or from guided missiles, animal and plant life would wither away. The stream of invisible, soundless bullets would pass through living tissue, breaking down its cells irreparably. Under intense radiation people might die within a matter of minutes. Under reduced radiation they would contract radiation sickness, which brings a slower, lingering death.

The worst thing in this picture of cosmic ray warfare is the fact that such lethal guns would require no huge plants such as are necessary for atomic bomb production. They could be manufactured secretly. Every manufacturer of heavy machinery and radar equipment could turn them out. Controls would therefore be very difficult to enforce.

The interstaller origin of the bombarding cosmic rays has been proven by extensive experiments conducted by Prof. Robert A. Millikan, of the University of California, and others. These research workers took Geiger-Mueller radiation counters to all parts of the world and found, by placing the equipment in various positions, that the rays were subject to bending by the earth’s magnetic field. Near the Poles they came from straight above, with very few coming in from the sides; but in the middle latitudes most of the rays come in at an angle coinciding with the lines of the magnetic field.

Since this field extends some ten thousand miles beyond the atmosphere, it is obvious that the cosmic rays have no terrestrial origin.

But scientists still know little about the manner in which cosmic rays originate.

The most logical theory offered seems to be one based on Einstein’s famous equation. It is that a process of annihilation or self destruction of atoms at rest is constantly going on. An analysis of the atoms in the most abundant elements in far-away space, such as boron, carbon, nitrogen, oxygen, aluminum and silicon shows that if they split apart and suffer no loss in energy while traversing space on their way to the earth, one half of the break-up energy corresponds to the exact values registered on earth. These average between five and 14 billion electron volts. The other half of the energy would be shot away in the opposite direction in accordance with Newton’s third law of motion, which states that for every action there must be an equal and opposite reaction.

So, digging behind the scenes of cosmic ray investigation, we find that physical laboratories all over the world are busy sending up rockets and airplanes with Geiger-Mueller counters and other cosmic ray equipment in a determined attempt to find out what the rays are like at extreme altitudes.

If meson bombardment is part of some atomic process, scientists want to know how the triggering rays manifest themselves above the atmosphere.

All of this knowledge will later be applied to the development of the cosmic ray-gun.