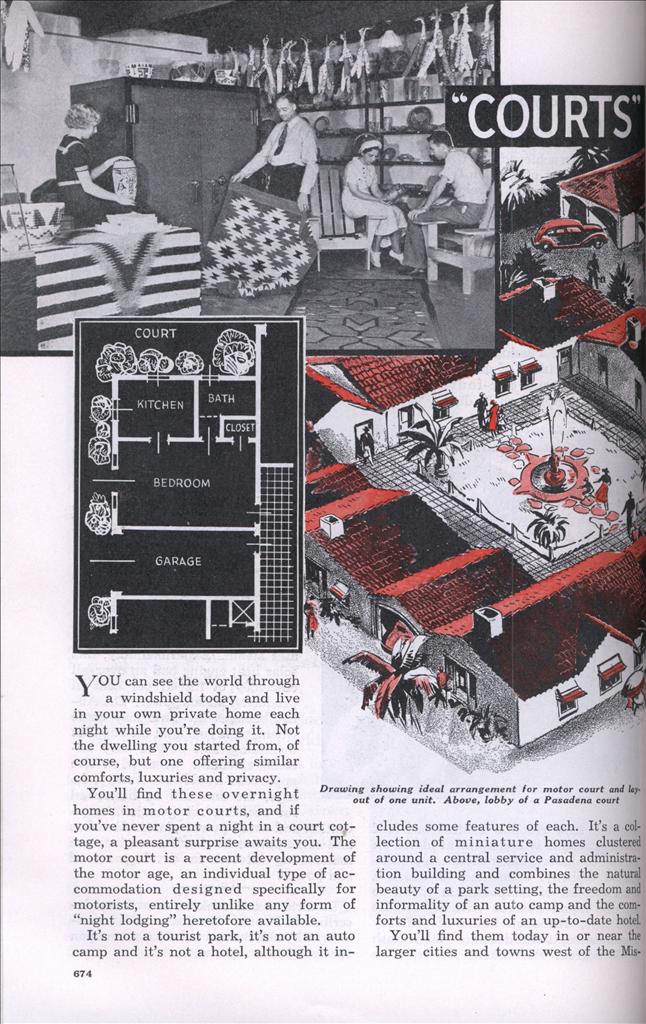 YOU can see the world through a windshield today and live in your own private home each night while you’re doing it. Not the dwelling you started from, of course, but one offering similar comforts, luxuries and privacy.

You’ll find these overnight homes in motor courts, and if you’ve never spent a night in a court cottage, a pleasant surprise awaits you. The motor court is a recent development of the motor age, an individual type of accommodation designed specifically for motorists, entirely unlike any form of “night lodging” heretofore available.

It’s not a tourist park, it’s not an auto camp and it’s not a hotel, although it includes some features of each. It’s a collection of miniature homes clustered around a central service and administration building and combines the natural beauty of a park setting, the freedom and informality of an auto camp and the comforts and luxuries of an up-to-date hotel. You’ll find them today in or near the larger cities and towns west of the Mississippi and through the southwest. Tomorrow you are likely to find them dotting the highways throughout the country for the idea is rapidly spreading eastward. They are solving a problem that motorists have wrestled with ever since the first adventurous driver sallied forth in a horseless buggy, a pair of goggles, a long linen coat and a cloud of dust to conquer strange trails. This driver had only two choices. If he could afford it and could find one, he headed for a hotel and hoped for the best. If he couldn’t, he camped out, cooked his meals in the open and slept in a tent or possibly in his car.

But despite the discomforts, more and more motorists persisted in “making trips.” It got so more travelers were arriving by auto in some sections than by train. So cities and towns began laying out camp grounds equipped with water hydrants, outdoor ovens and crude comfort stations. They proved a boon to the camper, but didn’t aid the chap who wanted shelter of a more permanent kind. Later home owners along traveled highways saw dollars rolling past their doors and “rooms for tourists” signs began to appear. Then some astute service station owners built a few wooden shacks, installed beds, tables and chairs and the first cabin camps vied with the other forms of accommodation.

Each had its own particular advantages and disadvantages for motorists. Hotels offered more comforts and luxuries, but usually were located in congested, noisy sections and were the most expensive type of lodgings. Camp grounds were least expensive and sometimes free, but comfort facilities were limited. Some cabin camps attracted undesirable customers and the motorist lured by a “rooms for tourists” sign had no way of knowing in advance the accommodations offered in such a private home.

The motor court combines most of the advantages of the above types of accommodation and eliminates the disadvantages. It is a collection of individual homes, each particular home intended to meet the needs of some particular motorist. Let’s drive in and inspect a typical court in California.

You’ll find it set back from the highway among shade trees. You drive into a U-shaped court with a crushed stone or concrete driveway and stop at the office building. The owner-manager greets you and you walk along paths lined with trees, shrubs and flowers to one of the thirty or more cottages, each separated from its neighbor by a garage. The construction of the group in this particular state is likely to be stucco of Spanish or Mission architecture with tile roofs.

You enter a large living room with thick carpet covering the entire floor. There’s an overstuffed divan, two or three easy chairs, a desk, occasional tables, reading lamps, pictures on the wall, possibly a telephone and built-in radio. It’s as comfortable and luxurious as any room in a good hotel. But this is only the living room. Adjoining it is a bedroom with comfortable twin beds, dresser, chairs, dressing table and a large closet. You note steam radiators in living room and bedroom, supplied from an underground central heating plant. The bedroom is carpeted too. Then there’s a kitchen, completely equipped with table, gas range, electric refrigerator and you may find dishes and silverware in their places in the cupboard. Perhaps there’s also a dinette with a folding bed tucked away in a closet to pro- vide room for Junior. And last of all there’s a tile bath with hot and cold running water and a tub and shower.

There’s nothing to do but drive your car into the adjoining garage, get your bags out of the trunk and “set up housekeeping.” Near by there’s a service station to condition your car for tomorrow’s trip, and within walking distance you’ll find a good restaurant and a grocery store to obtain provisions if you’re doing your own cooking. After dinner you’ll find outside your overnight home a comfortable bench where you can sit and admire your own individual flower garden and your own individual palm tree.

There’s maid service if you need it and next morning you’re ready to leave as soon as you step outside your home and stow your bags in the car. There’s no tipping, no one to disturb you during the night and you disturb no one because your neighbors are far enough distant so your radio or conversation is inaudible.

And the price? Three rooms, bath and garage for your car in any good hotel offering similar conveniences would probably cost you at least eight or ten dollars, perhaps more. In the motor court your overnight home costs you from two to five dollars, depending on the size of cottage you require and the number in your party. Through the west, you can make a three weeks trip, live in a motor court cottage each night, and pay less than $75 for this form of luxurious living.

The moderate rates are due to the location of the courts. Rarely are they found in downtown areas of high-priced real estate. You’ll find them on the edge of the city or on the fringe of a quiet residential neighborhood. And while the construction is substantial, it is inexpensive as compared with the cost of a large hotel.

There’s a business opportunity today in motor courts for the man with a few thousand dollars capital. A court of twenty to thirty units in an average locality can be constructed and furnished for from $40,000 to $50,000 including the ground, and credit usually can be obtained for part of this sum. Most courts provide a public lounge or lobby and some have their own dining rooms. One elaborate southern establishment has separate quarters for chauffeurs and maids.

This indicates that a different class of motorists is attracted to the courts, also called “motels,” “autels” and “autotels,” than patronizes auto camps and tourist parks. You’ll find your neighbors are people of means, driving good carsâ€”people you ordinarily would expect to find at the best hotels. They are attracted to the courts because of the conveniences offered.

Hotels which years ago did not accord a very hearty welcome to travel-stained motorists have seen the day when most of their guests arrive in their own cars, at least in many cities, and they are taking a lively interest in the motor court idea. So it will not be surprising to find motor courts conducted under hotel management. Some of the best today are run by oil companies or individual service stations.

One of the most pretentious organizations is United Motor Courts, an association of more than 100 individually owned and operated courts in the west and middle west. Members can only enter this association if their courts come up to certain high standards. There are also other associations of court owners in the west and southwest.

A few years ago touring motorists lived mostly in wayside shacks, clapboard cabins, private homes catering to tourists or hotels. Today they have available 1,500 de luxe motor courts, another 2,500 of exceptionally high standards and catering to people of substantial means, and 6,000 camps and cottage courts where those of modest means and lesser requirements can obtain clean and wholesome accommodations and surroundings. These 10,000 courts and camps have a total of 225,000 cottages and units, 300,000 beds to accommodate 550,000 travelers nightly and represent an investment of more than $200,000,000.

The rates in these “camps” range from a dollar to $1.50 for two persons, and in motor courts from $2.00 to $3.00 per couple and about $4.00 or $5.00 for four persons. The simpler your tastes, the less the cost. In the inexpensive ones, you may not find the luxuries of the de luxe lodge, but you’ll find all of them clean and comfortable if you exercise just a little care in making your selection. So make a trip and try living in a motor lodgeâ€”you’ll be as comfortable and find it almost as cheap as staying at home!