Modern Mechanix
Issue: Apr, 1935
Posted in: General, How to
Tags: art
No Comments on CREATING LIFE LIKE Figures For WAX MUSEUMS (Apr, 1935) 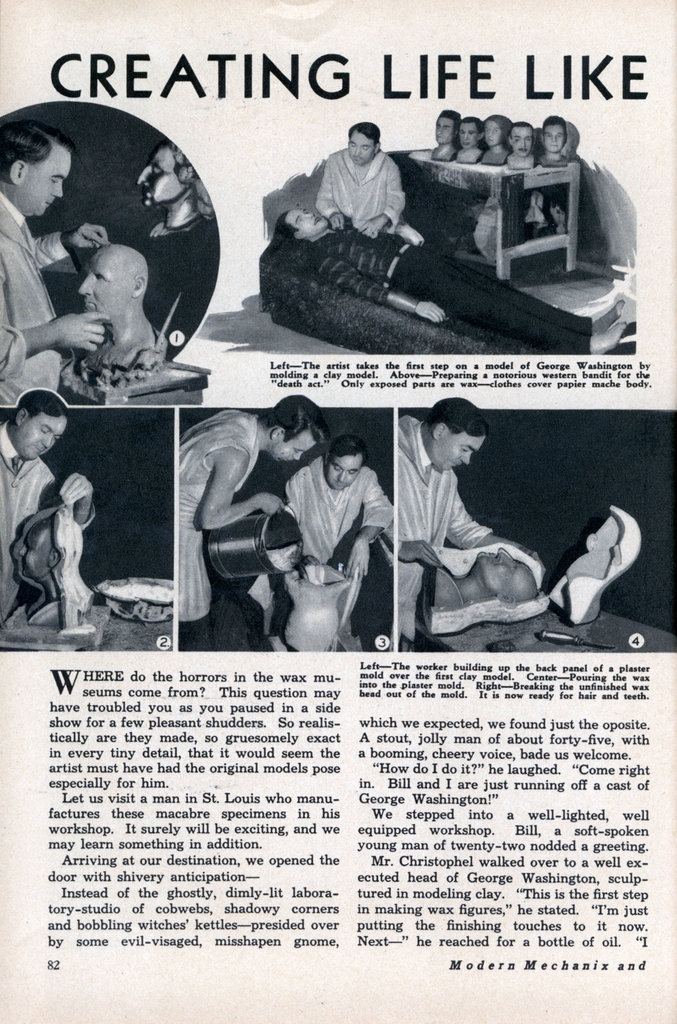 Washington, Roosevelt, Billy the Kid, Jesse James! All the world’s most colorful figures stand out with startling reality in a wax museum. This article tells -how workers transfer a simple photograph into amazingly life like figures sculptured in tinted wax.

WHERE do the horrors in the wax museums come from? This question may have troubled you as you paused in a side show for a few pleasant shudders. So realistically are they made, so gruesomely exact in every tiny detail, that it would seem the artist must have had the original models pose especially for him.

Let us visit a man in St. Louis who manufactures these macabre specimens in his workshop. It surely will be exciting, and we may learn something in addition.

Arriving at our destination, we opened the door with shivery anticipation. Instead of the ghostly, dimly-lit laboratory-studio of cobwebs, shadowy corners and hobbling witches’ kettlesâ€”presided over by some evil-visaged, misshapen gnome, which we expected, we found just the oposite. A stout, jolly man of about forty-five, with a booming, cheery voice, bade us welcome.

“How do I do it?” he laughed. “Come right in. Bill and I are just running off a cast of George Washington!”

We stepped into a well-lighted, well equipped workshop. Bill, a soft-spoken young man of twenty-two nodded a greeting.

Mr. Christophel walked over to a well executed head of George Washington, sculptured in modeling clay. “This is the first step in making wax figures,” he stated. “I’m just putting the finishing touches to it now. Nextâ€”” he reached for a bottle of oil. “I grease the clay head thoroughly, to keep it from sticking to the plaster.

“People often wonder why the figures are so true to life. This is a compliment to the sculptor, for he seldom sees the original model â€”most of them being deadâ€”and must go either by old pictures found in books orâ€”as is sometimes the caseâ€”from a newspaper clipping. Figures of modern notorious characters and celebrities are often found in this way.

“A wax worker’s art is not always gruesome,” Chris continued, taking the finished clay model over to where Bill was mixing Plaster of Paris. “Like Washington, here. Fifty per cent of our business comes from orders for non-criminal characters.

Setting the head upright on a board, he took clay and worked it into slender, flat pieces. “These are ‘stops,'” he said. “When plaster is placed over the head, these strips will break it up into panels.”

“You can start heating the wax, now, Bill,” he said, turning to his young assistant. “By the wayâ€”this is not ordinary wax. It’s five different kinds of waxes, and it’s tempered just like metal.”

While the wax cools, he ties the three panels of the plaster cast together with heavy twine. Soon, the wax is gurgling into a spouted can. “Pour it slowly, we don’t want any bubblesâ€””

As soon as the mould is brimful, Christophel immediately up-ends it back into the container. “We pour it out because we want a hollow head. If solid, it holds the heat too long and afterward expands out of shape. There’s plenty now to give it about an inch of thickness all around.”

The next step is to untie the ropes and remove the mould from around the wax casting. Chris next hauled out tools, then a handful of glass eyesâ€”real onesâ€”and false teeth!

“Just a few of the things that make them more real,” said Christophel. “For each head a special set and size of teeth is used, copying, as near as possible, the persons’ own. The eyes must match also. Andâ€”” he pulled down a huge box and opened it. Out of it cascades every known shade of hair. “Human hair! I even make eyebrows and eyelashes for my figuresâ€”to the exact length and size. The hair is stuckâ€”imbeddedâ€”right into the scalp like this.” He picked up a needle-pointed punch in one hand, a lock of hair in the other and began vigorously pecking away. Body is Made of Paper, Not Wax

“Now about the body. My latest invention is a breathing figure. To start with, moulds are made of the body with plaster casts. But papier-mache instead of wax is used in construction,” he nods toward Bill who is industriously slapping wet paper into the mould. “Only on exposed partsâ€”heads, feet, hands, is wax used.

“Here is my breathing figureâ€”” he walked over to a nearly complete body lying on a table. Reaching toward the chest, he pulled two door-like parts open. Inside was an off center wooden disk on a steel shaft. “When this disk turns, it lifts the divided pieces, causing the chest to rise and fall. Underneath is the silent electric motor running a reduction-gear timed to conform with breathing.”