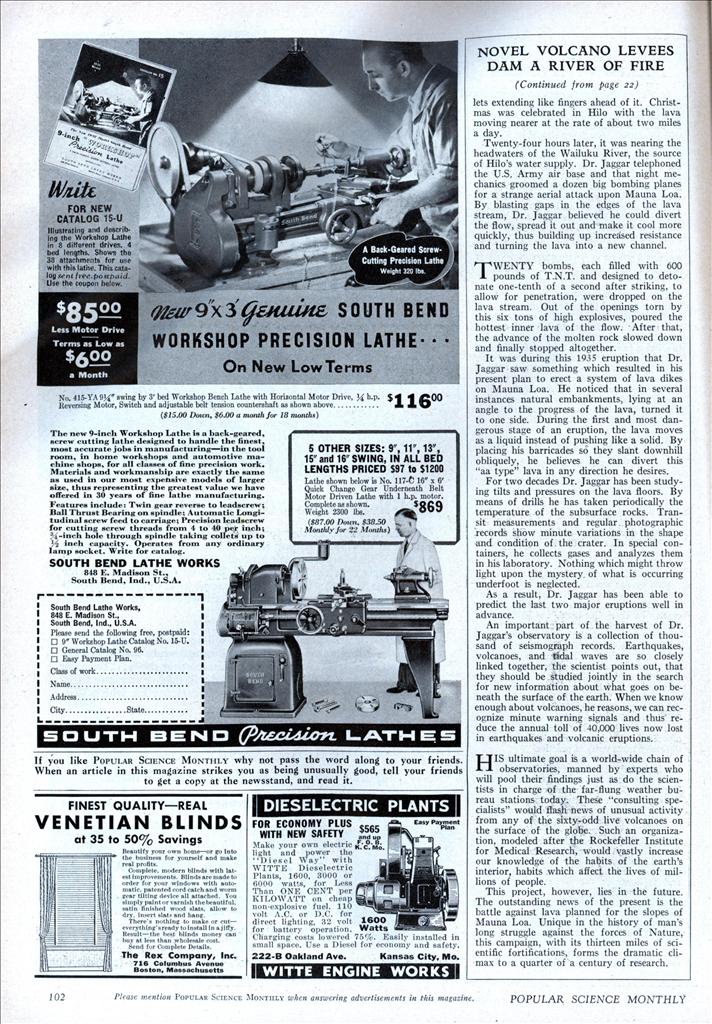 Damming a River of Fire

THE strangest fortification line on earth is being planned for the island of Hawaii. For thirteen miles across the flanks of Mauna Loa, the world’s most active volcano, high barricades will dam and divert rivers of fire. This daring scheme is designed to protect the Hawaiian city of Hilo, with its 20,000 inhabitants, from the volcano’s flow of lava. Science, for the first time in history, has declared war on a volcano.

Dr. Thomas A. Jaggar, director of the Hawaiian Volcano Observatory, is the originator of the plan. For twenty years, Dr. Jaggar literally has lived with Hawaii’s famous volcano. He has studied it, tested it, kept a day-to-day record of its changing pressures, its shifting temperatures, its altering aspects. His home, hung inside the walls of the vast Kilauea crater, the largest opening on the sides of Mauna Loa, is unique among habitations. It was there, not long ago, that Dr. Jaggar explained to me his plan for a scientific battle line to safeguard the city of Hilo.

Mauna Loa, he pointed out, is the second highest peak in the Pacific. It towers 13,675 feet above sea level. Once every three and a half years, on the average, incandescent rivers of lava flow down its sides. At three strategic points—one at 10,000 feet, another at 7,000 feet, and the third at 2,500 feet— Dr. Jaggar plans to erect his barricades of concrete and igneous rock to turn the tide of lava down relatively uninhabited valleys to the sea.

The uppermost rampart will be fifteen feet high and five miles long. It is expected to cost in the neighborhood of $300,000. This embankment will give the lava its first impetus to the west. The second barricade, as tall as a two-story house and one mile long, will plug up the saddle between Mauna Loa and its neighboring peak, Mauna Kea. It will cost about $100,000. Already, CCC workers have completed ten miles of road which makes accessible the site of the highest embankment.

The final barrier is to be seven miles long and eighteen feet high, curving to the west of Hilo like a gigantic parenthesis mark. If the lava breaks past the first two embankments, this final wall is expected to turn the flow away from Hilo into the Pacific. Starting at an elevation of about 2,500 feet, the $400,000 barricade will curve downward almost to sea level. Rivers, railways, and highways will pierce the wall through arched openings. But immense steel gates will be provided at each arch, huge doors that can be rolled shut in times of emergency.

Although the total cost of the project is thus approximately $800,000, the amount is small in comparison with the value of the property it is expected to protect. The physical valuation of Hilo, alone, is $50,000,000.

Three valleys, scarring the eastern slopes of Mauna Loa, converge just above Hilo. Like troughs, they tend to lead the lava toward the city. Although the community is forty miles from the summit of the volcano, lava flows on several occasions have pushed close to its outskirts.

In 1885, during an eruption which lasted for sixteen months, the lava approached within five miles of the city limits. In 1881, the molten river, fed for nine months by the lava springs of Mauna Loa, crept to within one mile of the Federal Building in Hilo. At times, these streams of melted rock have a temperature of 2,000 degrees Fahrenheit. Even a year after an eruption has ceased, it is possible to cook steaks on the blackened lava far down the mountainside.

Two years ago, in 1935, one of the most spectacular of Mauna Loa’s many eruptions came to a dramatic climax.

About seven o’clock in the evening on November 21, a sharp earthquake shook the island. Six hours later, a tidal wave struck the waterfront, hurling spray twenty-five feet in the air. At dawn, red lava was pouring down the side of Mauna Loa, eating its way through a dense forest. Trees, swirling in the molten eddies, generated steam in their moist cells and exploded as though filled with gunpowder. At some places, the smoking rivers of lava were rushing downward at fifteen miles an hour; at others, they were cascading over cliffs like flaming Niagaras. Clouds of smoke and gas rose into the sky and the red glow of the incandescent rock was visible 175 miles away on Oahu Island.

Day after day, the flow continued. It passed the saddle between Mauna Loa and Mauna Kea, and headed down the eastern slope toward Hilo. Dr. Jaggar circled overhead in a swift army plane watching developments. The main stream was a mile wide with more than fifty lets extending like fingers ahead of it. Christmas was celebrated in Hilo with the lava moving nearer at the rate of about two miles a day.

Twenty-four hours later, it was nearing the headwaters of the Wailuku River, the source of Hilo’s water supply. Dr. Jaggar telephoned the U.S. Army air base and that night mechanics groomed a dozen big bombing planes for a strange aerial attack upon Mauna Loa. By blasting gaps in the edges of the lava stream, Dr. Jaggar believed he could divert the flow, spread it out and make it cool more quickly, thus building up increased resistance and turning the lava into a new channel.

TWENTY bombs, each filled with 600 pounds of T.N.T. and designed to detonate one-tenth of a second after striking, to allow for penetration, were dropped on the lava stream. Out of the openings torn by this six tons of high explosives, poured the hottest inner lava of the flow. After that, the advance of the molten rock slowed down and finally stopped altogether.

It was during this 1935 eruption that Dr. Jaggar saw something which resulted in his present plan to erect a system of lava dikes on Mauna Loa. He noticed that in several instances natural embankments, lying at an angle to the progress of the lava, turned it to one side. During the first and most dangerous stage of an eruption, the lava moves as a liquid instead of pushing like a solid. By placing his barricades so they slant downhill obliquely, he believes he can divert this “aa type” lava in any direction he desires.

For two decades Dr. Jaggar has been studying tilts and pressures on the lava floors. By means of drills he has taken periodically the temperature of the subsurface rocks. Transit measurements and regular, photographic records show minute variations in the shape and condition of . the crater. In special containers, he collects gases and analyzes them in his laboratory. Nothing which might throw light upon the mystery, of what is occurring underfoot is neglected.

As a result, Dr. Jaggar has been able to predict the last two major eruptions well in advance.

An important part of the harvest of Dr. Jaggar’s observatory is a collection of thousand of seismograph records. Earthquakes, volcanoes, and tidal waves are so closely linked together, the scientist points out, that they should be studied jointly in the search for new information about what goes on beneath the surface of the earth. When we know enough about volcanoes, he reasons, we can recognize minute warning signals and thus reduce the annual toll of 40,000 lives now lost in earthquakes and volcanic eruptions.

HIS ultimate goal is a world-wide chain of observatories, manned by experts who will pool their findings just as do the scientists in charge of the far-flung weather bureau stations today. These “consulting specialists” would flash news of unusual activity from any of the sixty-odd live volcanoes on the surface of the globe. Such an organization, modeled after the Rockefeller Institute for Medical Research, would vastly increase our knowledge of the habits of the earth’s interior, habits which affect the lives of millions of people.

This project, however, lies in the future. The outstanding news of the present is the battle against lava planned for the slopes of Mauna Loa. Unique in the history of man’s long struggle against the forces of Nature, this campaign, with its thirteen miles of scientific fortifications, forms the dramatic climax to a quarter of a century of research.