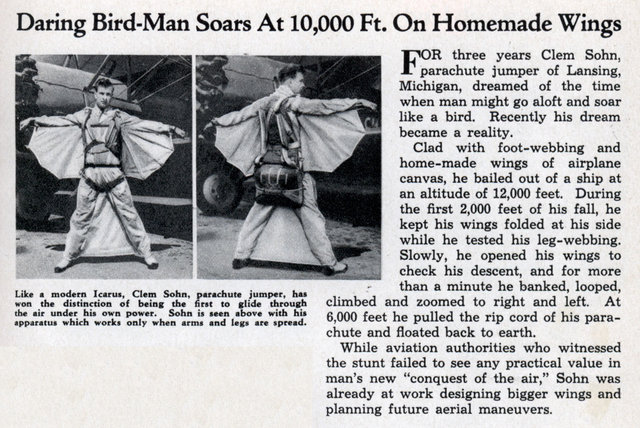 FOR three years Clem Sohn, parachute jumper of Lansing, Michigan, dreamed of the time when man might go aloft and soar like a bird. Recently his dream became a reality.

Clad with foot-webbing and home-made wings of airplane canvas, he bailed out of a ship at an altitude of 12,000 feet. During the first 2,000 feet of his fall, he kept his wings folded at his side while he tested his leg-webbing. Slowly, he opened his wings to check his descent, and for more than a minute he banked, looped, climbed and zoomed to right and left. At 6,000 feet he pulled the rip cord of his parachute and floated back to earth.

While aviation authorities who witnessed the stunt failed to see any practical value in man’s new “conquest of the air,” Sohn was already at work designing bigger wings and planning future aerial maneuvers.