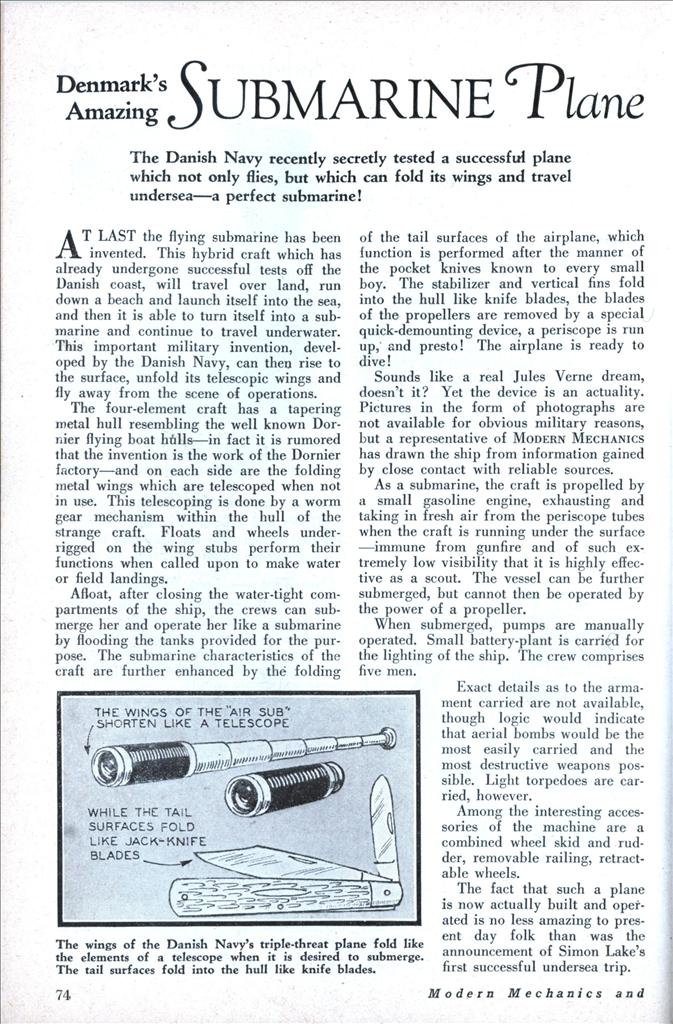 The Danish Navy recently secretly tested a successful plane which not only flies, but which can fold its wings and travel underseaâ€”a perfect submarine!

AT LAST the flying submarine has been invented. This hybrid craft which has already undergone successful tests off the Danish coast, will travel over land, run down a beach and launch itself into the sea, and then it is able to turn itself into a submarine and continue to travel underwater. This important military invention, developed by the Danish Navy, can then rise to the surface, unfold its telescopic wings and fly away from the scene of operations.

The four-element craft has a tapering metal hull resembling the well known Dormer flying boat hullsâ€”in fact it is rumored that the invention is the work of the Dornier factoryâ€”and on each side are the folding metal wings which are telescoped when not in use. This telescoping is done by a worm gear mechanism within the hull of the strange craft. Floats and wheels under-rigged on the wing stubs perform their functions when called upon to make water or field landings.

Afloat, after closing the water-tight compartments of the ship, the crews can submerge her and operate her like a submarine by flooding the tanks provided for the purpose. The submarine characteristics of the craft are further enhanced by the folding of the tail surfaces of the airplane, which function is performed after the manner of the pocket knives known to every small boy. The stabilizer and vertical fins fold into the hull like knife blades, the blades of the propellers are removed by a special quick-demounting device, a periscope is run up,’ and presto! The airplane is ready to dive!

Sounds like a real Jules Verne dream, doesn’t it? Yet the device is an actuality. Pictures in the form of photographs are not available for obvious military reasons, but a representative of Modern Mechanics has drawn the ship from information gained by close contact with reliable sources.

As a submarine, the craft is propelled by a small gasoline engine, exhausting and taking in fresh air from the periscope tubes when the craft is running under the surface â€”immune from gunfire and of such extremely low visibility that it is highly effective as a scout. The vessel can be further submerged, but cannot then be operated by the power of a propeller.

When submerged, pumps are manually operated. Small battery-plant is carried for the lighting of the ship. The crew comprises five men.

Exact details as to the armament carried are not available, though logic would indicate that aerial bombs would be the most easily carried and the most destructive weapons possible. Light torpedoes are carried, however.

Among the interesting accessories of the machine are a combined wheel skid and rudder, removable railing, retractable wheels.

The fact that such a plane is now actually built and operated is no less amazing to present day folk than was the announcement of Simon Lake’s first successful undersea trip.