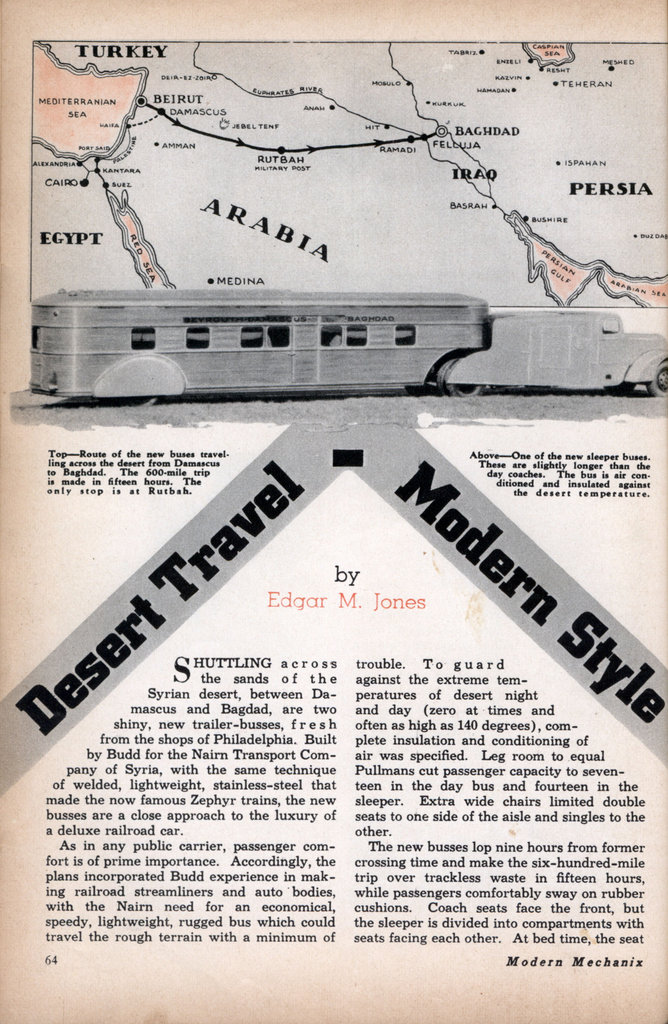 SHUTTLING across the sands of the Syrian desert, between Damascus and Bagdad, are two shiny, new trailer-busses, fresh from the shops of Philadelphia. Built by Budd for the Nairn Transport Company of Syria, with the same technique of welded, lightweight, stainless-steel that made the now famous Zephyr trains, the new busses are a close approach to the luxury of a deluxe railroad car.

As in any public carrier, passenger comfort is of prime importance. Accordingly, the plans incorporated Budd experience in making railroad streamliners and auto bodies, with the Nairn need for an economical, speedy, lightweight, rugged bus which could travel the rough terrain with a minimum of trouble. To guard against the extreme temperatures of desert night and day (zero at times and often as high as 140 degrees), complete insulation and conditioning of air was specified. Leg room to equal Pullmans cut passenger capacity to seventeen in the day bus and fourteen in the sleeper. Extra wide chairs limited double seats to one side of the aisle and singles to the other.

The new busses lop nine hours from former crossing time and make the six-hundred-mile trip over trackless waste in fifteen hours, while passengers comfortably sway on rubber cushions. Coach seats face the front, but the sleeper is divided into compartments with seats facing each other. At bed time, the seat backs swing up to form upper berths supported by tubular frames. The gap between the seats is filled with an extra cushion and the lower is made. Sheets, pillows, blankets and curtains make the berths ready for sleepy travelers. Lighting and adjustable outlets for conditioned air are provided for each berth.

Following a formula akin to the hostess or steward plan on American airlines, a native throughout the trip comforts passengers with ice water, tea and coffee as well as box lunches with wrapped sandwiches and fruit. Each patron is provided with a small container having a patented lock for the protection of tooth brush, cash, jewelry, etc. Lockers for storing blankets, pillows, clothing and miscellaneous equipment are in the front of the trailer, while the rear has a dressing room which also contains wash basins and toilet facilities.

The flooring is surfaced with heavy linoleum which extends up the walls for six inches so that a flushing by hose is possible.

Walls, doors, and partitions are faced with birch plywood. The ceiling is made of perforated aluminum which acts to deaden sound. All windows are of safety glass and are curtained with drapes. A silvery corrugated exterior, looking for all the world like something made from Mother’s washboard, has some properties for deflecting sun rays, but any persistent outside heat or cold is stopped by insulation four inches thick in the roof and two inches thick in the sides.

Powered by a 150 h. p. Diesel motor, the tractor unit, sheathed in aluminum, furnishes a cab for the driver and his helper, air conditioning equipment, and space for baggage. At the rear of the tractor unit are hinged wings to enhance the streamlined effect.

Five 6.6 volt batteries connected in series and located in the tractor unit comprise the 32 volt lighting system for the bus. When the motor isn’t running, interior lighting is used sparingly. Compression for the cooling system is obtained from a gasoline engine. Air intakes are in the roof and exhaust fans on each side push out the warm air. Filled to capacity with passengers, baggage, water, and two hundred gallons of fuel oil, the total weight goes over fifteen tons.

The one and only scheduled stop between points is Rutbah which is the nearest thing in real life to the movie conception of desert outposts. Grim walls, radio towers, and detachments of soldiers remind travelers of Beau Sabreur and the Foreign Legion. The hotel, a large restaurant, and an ice-making plant do a thriving business at this meeting point for air and motor travelers . Possessing the only wells which do not go dry during the hot spell, Rutbah attracts the Arabs who camp outside the fort with their camels and livestock.

During the rainy months of January and February, water collects in the hollows of the desert. Puddles and mud, hundreds of yards wide and several miles long, spot the trail. As there is no telling the extent of this area, it is impracticable to detour. Drivers with an acquired Oriental fatalism on coming to mud, warn passengers, then drive at full speed to slide across on the belly of the bus. As a concession to this practice, the new trailers (turtle-like) have completely enclosed bottoms. Sandstorms force a complete stop (seldom over an hour or so). The tight fitting doors and windows prevent discomfort.

To the astonished natives and wondering resident Europeans, the new busses are but the most recent surprise that Norman Nairn delights in springing upon the slow-moving East. He was the first to have a speed boat to skim the Mediterranean near Beirut; the first to own an airplane. Always wanting speed, Nairn now in bis forties, has made a record of spectacular but profitable ventures.