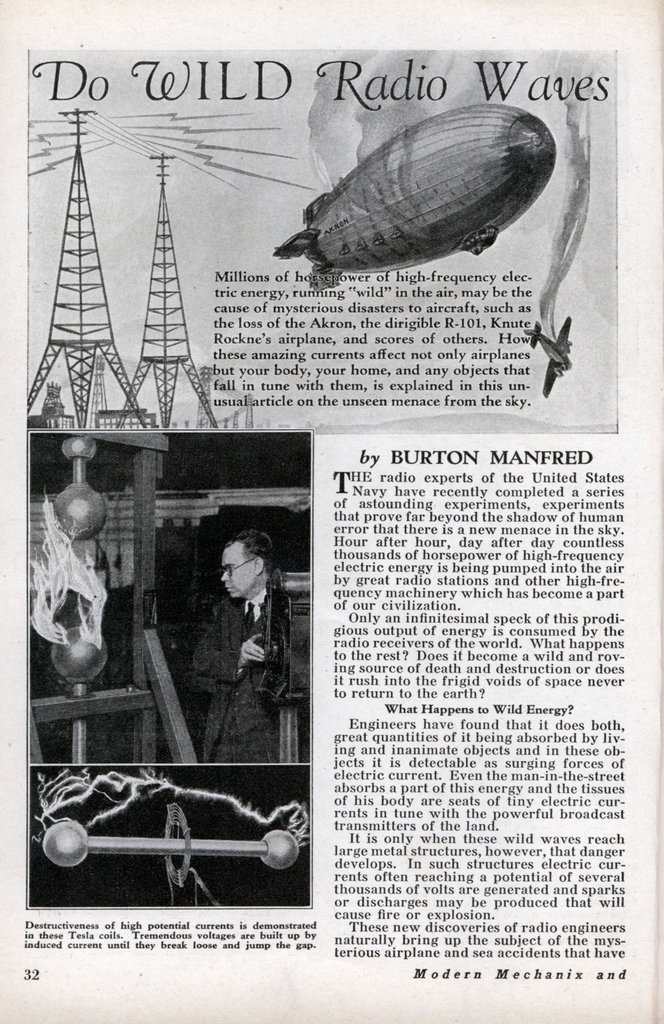 Millions of horsepower of high-frequency electric energy, running “wild” in the air, may be the cause of mysterious disasters to aircraft, such as the loss of the Akron, the dirigible R-101, Knute Rockne’s airplane, and scores of others. How these amazing currents affect not only airplanes but your body, your home, and any objects that fail in tune with them, is explained in this unusual article on the unseen menace from the sky.

THE radio experts of the United States Navy have recently completed a series of astounding experiments, experiments that prove far beyond the shadow of human error that there is a new menace in the sky. Hour after hour, day after day countless thousands of horsepower of high-frequency electric energy is being pumped into the air by great radio stations and other high-frequency machinery which has become a part of our civilization.

Only an infinitesimal speck of this prodigious output of energy is consumed by the radio receivers of the world. What happens to the rest? Does it become a wild and roving source of death and destruction or does it rush into the frigid voids of space never to return to the earth?

What Happens to Wild Energy?

Engineers have found that it does both, great quantities of it being absorbed by living and inanimate objects and in these objects it is detectable as surging forces of electric current. Even the man-in-the-street absorbs a part of this energy and the tissues of his body are seats of tiny electric currents in tune with the powerful broadcast transmitters of the land.

It is only when these wild waves reach large metal structures, however, that danger develops. In such structures electric currents often reaching a potential of several thousands of volts are generated and sparks or discharges may be produced that will cause fire or explosion.

These new discoveries of radio engineers naturally bring up the subject of the mysterious airplane and sea accidents that have gone unsolved during the past few years. What of the Naval collier Cyclops that was swallowed up by the sea? Was it a victim of its own radio transmitter and did these powerful fugitive currents cause an explosion on board that obliterated it from the face of the world?

We have the same right to put the same question in connection with a number of very mysterious airplane accidents that have occurred during the past few years, notably the one in which the famous and lamented coach, Knute Rockne, was killed. The airplane is particularly susceptible because of the inevitable gasoline tank. Sparks by induced current at this point will be bound to produce fatal results if the ship is afloat.

It has long since been known also that large steel buildings in the vicinity of broadcasting stations suck in tremendous quantities of this energy and that they become veritable electric dynamos. So potent does this radiation become that small electric lights may be lit by wireless under the antennae systems of large radio stations.

Most recent of those which come to mind is the disaster of the dirigible Akron, the precise cause of whose collapse into the Atlantic is unknown at this writing. The British dirigible R-101, which fell in flames in France, still presents a mystery as to the cause of its destruction, since the ship was very carefully fireproofed and supposedly immune to this form of destruction. The series of such catastrophes could be endlessly augmented by a listing of airplane disasters in which the planes apparently took fire in the air from unknown causes. The natural tendency has been to put the blame on gasoline, accidentally ignitedâ€” this in spite of the fact that every precaution known to science is taken to prevent just such catastrophes. The appalling number of these accidents which have had to be written down as mysteries demands that serious credence be given the experiments which indicate that tremendous electrical forces unleashed in the sky through radio stations and other mediums are agencies of destruction.

On this month’s cover of Modern Me-chanix and Inventions the artist has illustrated the principle by which a dirigible could be destroyed by wild electric currents. He has superimposed over the body of the dirigible a Tesla coil of the type used in generating artificial lightning discharges, to portray graphically the tremendous electrical forces which roam the skies.

Those who understand electricity at all know that when a metal conductor is brought into proximity of a wire carrying alternating current, a second current will be set up in that conductor. This is called electromagnetic induction and at the higher frequencies such as those used by the newer electric furnaces and the radio stations, to say nothing of X-ray tubes and some of the new therapeutic equipment in hospitals, these induced currents not only become more powerful but more mysterious and elusive. Especially is this the case when the electric dimensions of the conductor in the vicinity of a powerful radiator are such that a condition of resonance or “tune,” as the layman calls it, is set up between the two.

Long Wavelengths Not So Dangerous

In the old days of radio when large wavelengths were used, wavelengths so great that there was nothing on earth in the way of man-made metal objects to fall in tune with them, there was little danger from this source, but today the wavelengths have been pushed down into a region of small-ness where they compare to the ordinary things and appliances that we use every day.

A five-meter wave just about “fits” our car and wavelengths a little above this are accommodated by the metal frames of the average airplane. With the tendency of radio engineers to push wavelengths lower and lower the day is rapidly approaching when ordinary household objects will fall in tune with sources of energy that will become real hazards to daily life, for while these wavelengths are being made shorter and shorter, the power used is being expanded at high rate.

Let us consider for a moment the startling facts that were discovered by our naval experts in connection with an investigation of the currents set up in large guns on board ship while the radio transmitter was operating. Most of us look upon a voltage of 2000 as a very respectable amount of electricity and we should perhaps be very surprised to be told that voltages of these magnitudes are set up in some of the big guns and that these guns, large as they are, may be exploded by such induced energy.

In ordinary cases, 24-volt electric lights may be lighted on certain of the guns of a battleship when the radio transmitter is working. In such cases, where the gun is mounted close to a powerful radiator of this type, shielding is of little or no use, for even in the case of the larger bores that were breech-protected with turrets, powerful electric currents were found surging back and forth in them.

It should be borne in mind that under such favorable conditions, the guns or other metal objects on shipboard do not need to be in electrical tune or resonance with the source of radiation. The length of guns on board our battleships today are now comparable to quarter wavelengths or multiples of quarter wavelengths of the type of wave generated by naval radio equipment. Such conditions make possible the creation of standing electric waves by excitation from a nearby radiator.

But this is but one of the hazards that must be faced. Some idea of the powerful stray currents that may be produced in airplane structures may be had when it is said that the Navy experts found that the primers of airplane wing-tip flares could be set off when the plane was exposed to a high-frequency antennae field. This was not only done but currents powerful enough to light the airplane running lights were also produced.

Research of a most convincing kind has demonstrated that resonance between a distant radio transmitter and a gasoline filling hose may reach a point where the current induced in the hose will be great enough to produce a spark and set the gasoline off. From this it is obvious that our radio age and our much vaunted gasoline age are a bit at odds and that with the growing use of shorter waves of the same length as gasoline hose some newly invented precautions will be necessary to protect not only property but human life and limb also.

It is the unexpected results and places in which these strange electric currents are produced that make the hazard very real, very difficult to combat. For instance, it has been found that the copper eaves of a house will have powerful electric currents set up in them under certain conditions, and that these currents are great enough to produce sparks that will set the building afire.

Metal garages, steel walls and roofs, ships’ hulls, and steel ceilings, as well as automobiles and railroad equipment become unexpected and unsuspected carriers of death and disaster. So mysterious and incomprehensible are the many and curious manifestations of electric current of this nature that ignorant attempts at prevention may easily do more harm than good.

During the past few years and particularly since we have had commercial aviation, there has been a rather large number of aerial accidents of a rather mysterious nature, accidents which could not be accounted for by mere machine failure or the failure of any vital part of the airplane. Time and time again, experts have examined the earthly remains of a once proud man-bird only to be baffled as to the real cause of the accident. On several occasions airplanes have been seen to merely explode and fall to earth in a streak of flame.

It would, of course, be rather rash to maintain that all of these accidents were due to high-frequency induction, but it seems to be a fairly well established fact that a large number of them have been caused in this way. In some cases it has no doubt been the ship’s own radio that sent it plunging to its doom. In other cases, an innocent radio operator perhaps miles away might have pressed his key or closed his antennae switch and sent a half-dozen souls streaking earthward in a furnace of flame.

The question naturally arises, will future civilization have to make sure that it is out of tune with the high-frequency generators of electricity? With the wavelengths of such equipment getting to a point where even our pocket pencils might be in resonance with them, this is by no means a fantastic question. If these developments go on, and there is certainly no indication of an abatement, we shall simply have to resort to the use of insulating materials. These materials will be used in metal objects in such a manner that they will break the objects up into a distinct number of electric parts. In such a way, present day objects that are now in tune or in resonance with our commercial wavelengths would be thrown out of tune.

If anyone doubts the statements made above, let him witness the experiment whereby such powerful induced currents are permitted to heat a frying pan sitting on cake of ice and to actually fry eggs with heat produced in this strange manner. In such cases, powerful electric currents are set up in the frying pan because the powerful magnetic lines of force are permitted to cut through it. The generated current in the frying is naturally short-circuited and by an effect called hysteresis, heat is produced.

One never knows where these phantom currents are surging back and forth but of their presence engineers have no doubt, and thereby still another complexity, something more to worry about and to guard against, is added to our already complex life.