Modern Mechanix
Issue: May, 1936
Posted in: Nautical
2 Comments on DOCKING the Normandie With New York’s TUG FLEET (May, 1936)

DOCKING the Normandie With New York’s TUG FLEET (May, 1936) 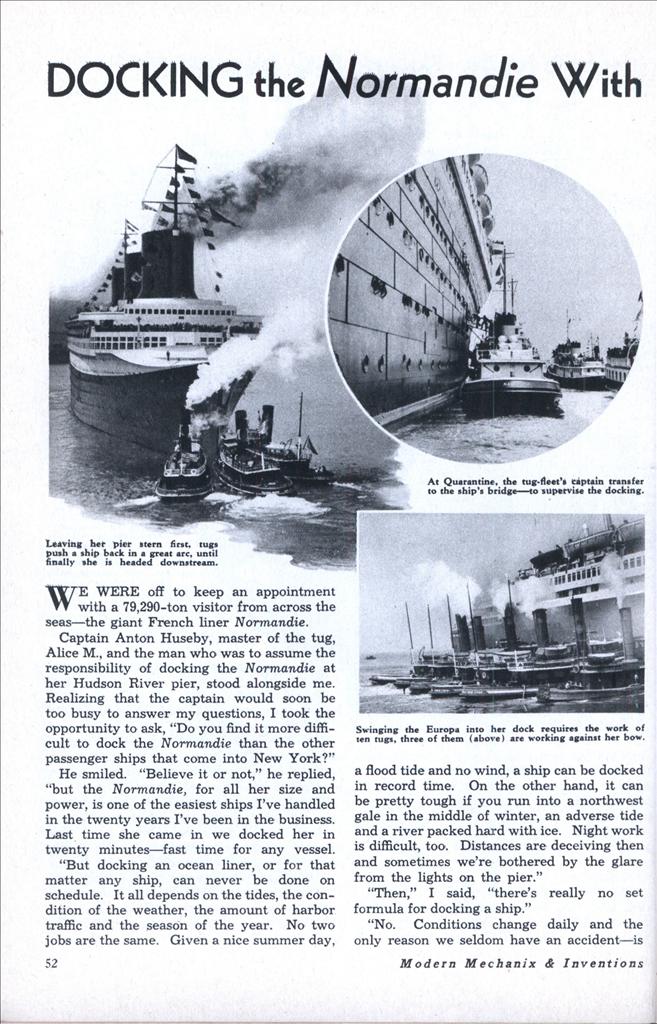 The Normandie, for all her great size and power, is one of the easiest of the big ships to handle, claims Anton Huseby, Norwegian captain of the Moran Fleet of New York Harbor tugboats, and the man responsible for docking this great liner. Last time he berthed her in 20 minutes —fast work on any vessel.

WE WERE off to keep an appointment with a 79,290-ton visitor from across the seas—the giant French liner Normandie.

Captain Anton Huseby, master of the tug, Alice M., and the man who was to assume the responsibility of docking the Normandie at her Hudson River pier, stood alongside me. Realizing that the captain would soon be too busy to answer my questions, I took the opportunity to ask, “Do you find it more difficult to dock the Normandie than the other passenger ships that come into New York?’* He smiled. “Believe it or not,” he replied, “but the Normandie, for all her size and power, is one of the easiest ships I’ve handled in the twenty years I’ve been in the business. Last time she came in we docked her in twenty minutes—fast time for any vessel.

“But docking an ocean liner, or for that matter any ship, can never be done on schedule. It all depends on the tides, the condition of the weather, the amount of harbor traffic and the season of the year. No two jobs are the same. Given a nice summer day, a flood tide and no wind, a ship can be docked in record time. On the other hand, it can be pretty tough if you run into a northwest gale in the middle of winter, an adverse tide and a river packed hard with ice. Night work is difficult, too. Distances are deceiving then and sometimes we’re bothered by the glare from the lights on the pier.”

“Then,” I said, “there’s really no set formula for docking a ship.”

“No. Conditions change daily and the only reason we seldom have an accident—is because we always anticipate trouble. We know from experience exactly what to expect.

“See this police whistle? Well, I use this to signal my directions to the tugs. They acknowledge each signal with blasts from their own whistles—that’s why you always hear a chorus of tugboat whistles when a ship is coming in. They all mean something. For instance, one blast means ahead; another single blast, stop; two blasts, reverse engines, and three or four quick blasts, push in and give her all you’ve got! We’ll have eight tugs on today’s job.”

“How do you determine the number of tugs?” I inquired.

“There again it depends on the conditions,” he answered. “When the Normandie first came over we used twelve boats, but I’ve docked her with only six. We usually use ten tugs for the Majestic, Berengaria, Bremen and Europa and about eight for the Aquitania and other ships of her size. But I can remember one tough day in the middle of winter when we had fourteen tugs on the Bremen and it took three hours to dock her.

All this was explained to me as we moved along towards the French Line pier. The Normandie had by this time cleared Quaran- tine and we could see her following us at a distance. When we reached the pier the seven other tugs assigned to the job were already there, spread out fan wise in the middle of the river.

The Normandie—now even larger by contrast to the surrounding buildings—halted in midstream, at right angles to her 1,100-foot pier. The Alice M. and two other tugs moved in on her starboard bow, side to side, and three other tugs took up a similar position on the port bow. I heard several quick blasts from Captain Huseby’s whistle and the six tugs, whose whistles had replied in kind, started pushing simultaneously, acting like a vice on the forepart of the ship.

When she had straightened out, she began to move ponderously under her own power towards the dock. The Alice M. and the two companion tugs had to scurry around the side of her to avoid being run down. When we got near the stern, I noticed that two extra tugs had taken long hawsers aboard from the aft end of the giant vessel and were standing by, ready to pull her close to the dock when her full length was alongside. It all appeared so effortless, so routine, that I was not aware the job had been completed until I saw the passenger gangplanks being lowered.