Modern Mechanix
Issue: May, 1931
Posted in: Medical
Tags: disease
No Comments on Dodging Death with the Public Health Service (May, 1931)

Dodging Death with the Public Health Service (May, 1931) 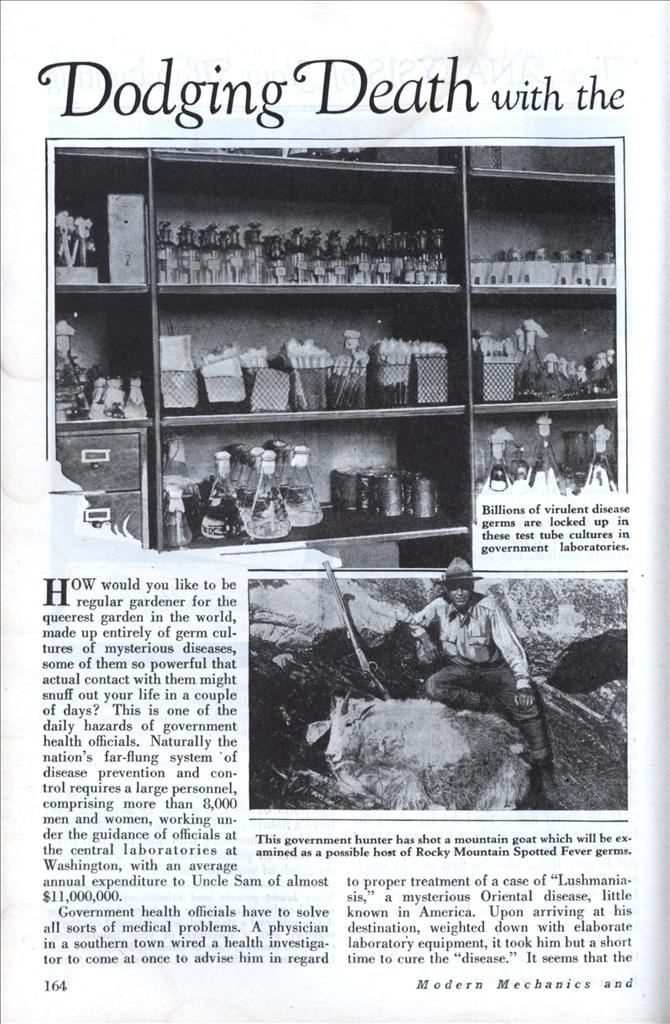 Day after day members of the government health service experiment with deadly germs of rare diseases to develop new medical cures, risking their lives by contracting dangerous illnesses such as tularemia and Dengue fever.

HOW would you like to be regular gardener for the queerest garden in the world, made up entirely of germ cultures of mysterious diseases, some of them so powerful that actual contact with them might snuff out your life in a couple of days? This is one of the daily hazards of government health officials. Naturally the nation’s far-flung system ‘of disease prevention and control requires a large personnel, comprising more than 8,000 men and women, working under the guidance of officials at the central laboratories at Washington, with an average annual expenditure to Uncle Sam of almost $11,000,000.

Government health officials have to solve all sorts of medical problems. A physician in a southern town wired a health investigator to come at once to advise him in regard to proper treatment of a case of “Lushmaniasis,” a mysterious Oriental disease, little known in America. Upon arriving at his destination, weighted down with elaborate laboratory equipment, it took him but a short time to cure the “disease.” It seems that the patient was a dope fiend who had contracted a series of boils from the practise of “shooting” himself with a dirty hypodermic.

One of the most dangerous diseases now under investigation by the government scientists is Rocky Mountain Spotted Fever. It has been feared as a fatal malady in the northwestern sections of the United States ever since that region was first settled.

Since one attack of the disease apparently develops an immunity to future attacks, the possibility of a vaccine suggested itself at once to the investigators. Here an initial difficulty was encountered; for it was found that the virus could not be cultivated in the usual laboratory way, in a test tube.

However, it also was discovered that the virus is developed and carried in the bodies of the ticks which transmit the disease. Hence it was decided to use the ticks as test tubes and prepare the vaccine from them. The ticks were allowed to feed upon infected guinea pigs until they had become thoroughly infected themselves. Then at the time when experiments showed the virus to be most concentrated, the ticks were ground up, and an emulsion was prepared with a solution of phenol, the preservative used in making most vaccines.

Even more mysterious, perhaps, than Rocky Mountain Fever, but not so dangerous, is the disease called tularemia. Back in 1910 there came reports from Utah and adjacent states of a peculiar human ailment popularly known as “deer fly fever,” accompanied by ulcerous sores and swollen glands, and in other characteristics resembling typhoid, particularly in regard to the fever stage, which lasts from two weeks to a month and sometimes even disables a man for as long as six months.

Every person—six all told—who has worked on the tularemia investigation in the government laboratories in Washington has contracted the disease. All have recovered, however, and fortunately for the research workers, it has been found that ordinarily persons who have once had the malady are thereby immunized. The work is now carried on by an immune crew of workers in a room shut off from the rest of the laboratory workers and avoided as much as possible by those having no official business there.

Government scientists discovered for medical science that wild rabbits, ticks and flies are the agents through which man is infected by tularemia. The ticks and flies transmit the disease by biting a man after they have bitten an infected rabbit.

Direct transmission from rabbits to man occurs only when the internal organs of the rabbit are handled, the investigators found. Cuts, scratches and other skin abrasions of the hands afford a portal of entry for the infection when dressing an infected rabbit. In addition, there is good evidence for believing that the bacterium of tularemia is one of those rare organisms which can pass through the unbroken human skin.

Another puzzling malady of nationwide interest is pellagra. In fact, for more than 100 years the medical world sought in vain for its cause and cure. Government investigators were able to prove, not so long ago, that the ailment is due to a faulty diet, the primary fault being a deficiency in a food essential, probably of the nature of a vitamin, which has been provisionally named vitamin P-P-, or pellagra-preventive. This vitamin is believed to be present in most all natural foods except the oils and fats, but in greatly varying amounts. In any case, health experts have cured the disease by dietary measures.