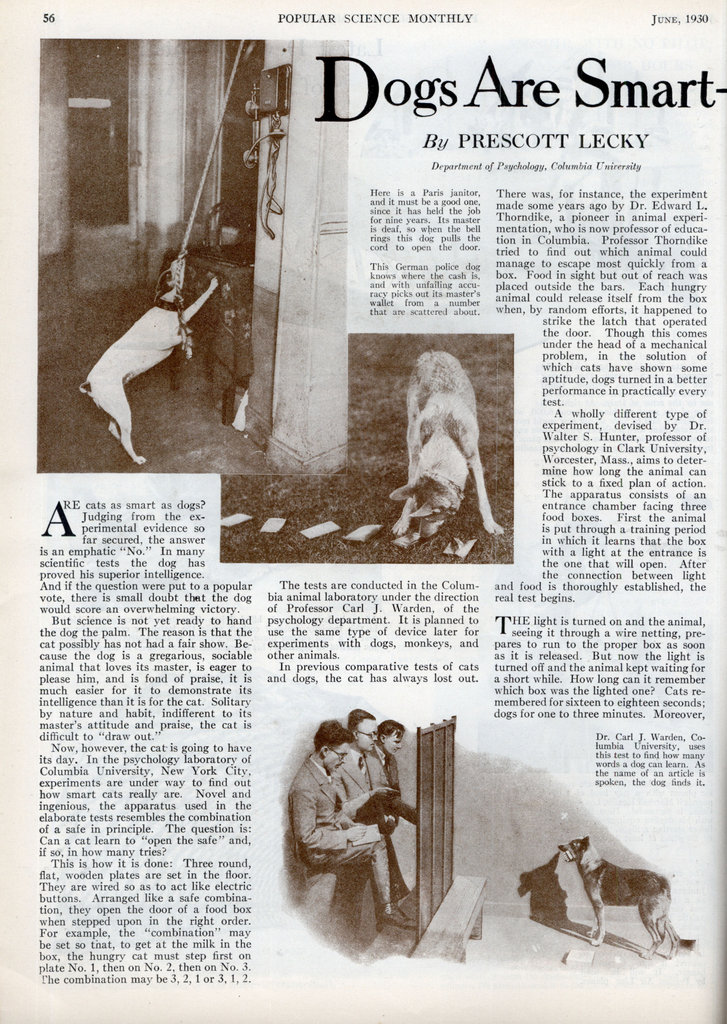 Now, however, the cat is going to have its day. In the psychology laboratory of Columbia University, New York City, experiments are under way to find out how smart cats really are. Novel and ingenious, the apparatus used in the elaborate tests resembles the combination of a safe in principle. The question is: Can a cat learn to “open the safe” and, if so, in how many tries?

This is how it is done: Three round, flat, wooden plates are set in the floor. They are wired so as to act like electric buttons. Arranged like a safe combination, they open the door of a food box when stepped upon in the right order. For example, the “combination” may be set so that, to get at the milk in the box, the hungry cat must step first on plate No. 1, then on No. 2, then on No. 3. The combination may be 3, 2, 1 or 3, 1, 2.

The tests are conducted in the Columbia animal laboratory under the direction of Professor Carl J. Warden, of the psychology department. It is planned to use the same type of device later for experiments with dogs, monkeys, and other animals.

In previous comparative tests of cats and dogs, the cat has always lost out.

There was, for instance, the experiment made some years ago by Dr. Edward L. Thorndike, a pioneer in animal experimentation, who is now professor of educa-tion in Columbia. Professor Thorndike tried to find out which animal could manage to escape most quickly from a box. Food in sight but out of reach was placed outside the bars. Each hungry animal could release itself from the box when, by random efforts, it happened to strike the latch that operated the door. Though this comes under the head of a mechanical problem, in the solution of which cats have shown some aptitude, dogs turned in a better performance in practically every test.

A wholly different type of experiment, devised by Dr. Walter S. Hunter, professor of psychology in Clark University, Worcester, Mass., aims to determine how long the animal can stick to a fixed plan of action. The apparatus consists of an entrance chamber facing three food boxes. First the animal is put through a training period in which it learns that the box with a light at the entrance is the one that will open. After the connection between light and food is thoroughly established, the real test begins.

THE light is turned on and the animal, seeing it through a wire netting, prepares to run to the proper box as soon as it is released. But now the light is turned off and the animal kept waiting for a short while. How long can it remember which box was the lighted one? Cats remembered for sixteen to eighteen seconds; dogs for one to three minutes. Moreover, in order to remember at all, the cat must keep its head and body pointed toward the box. A dog can turn away and still, in the majority of cases, choose correctly.

Apparently the difficulty for the cat lies in the use of a signal, which requires abstract reasoning. In more recent experiments, the cat saw the food itself placed in the box and the signal was discarded. Now she could remember the right door 67 times out of 100 for periods up to sixteen hours. Unfortunately for the sake of comparison, this modified method was not tried on dogs.

IX ANOTHER still more complicated test, worked out by the well-known animal psychologist, C. V. Hamilton, the dog also defeated the cat. Four doors are provided in the apparatus used in this experiment, all of them leading to food. These doors are kept shut, but one is unlocked for each trial. In no case, however, is the same door unlocked twice in succession. Therefore, the correct method of solution is to try the three remaining doors one after the other. The incorrect way is to try the door that was open before, or to try any door more than once. How did the dog and cat compare in their ability to solve this puzzle? In an equal number of attempts, the dog required 313 trials and the cat 352. Incidentally, the monkey proved smarter than either dog or cat, with a score of 291. That the test is not as easy as it may seem was shown by the fact that a mature person needed 201 trials.

Then there is the question of learning to understand human speech. In this respect, the dog’s superiority is unmistakable, though whether this is due to intelligence or is merely a reflection of the greater interest that dogs take in people has not yet been settled. After sixty trials, Professor Thorndike succeeded in teaching a cat to climb to the top of her cage for food when he said: “I must feed that cat.” To teach it not to climb at the words “I will not feed her” required 380 trials. But even so, the cat would climb in response to any other remark that was uttered, such as “Nice weather we are having,” or “Tomorrow is Tuesday.”

On the other hand, Professor Warden and Dr. L. H. Warner, experimenting with the famous dog Fellow in the Columbia psychology laboratory (P. S. M., Feb. ’29, p. 25), found that he was able to carry out fifty-three simple commands without a single error.

SO MUCH for scientific experimentation, in which neither animal ever comes up to its popular reputation for smartness. The reason for this may be that a good many laboratory tests, especially the earlier ones, failed to give either dog or cat a fair chance to demonstrate its real ability.

It is outside the laboratory that both dog and cat give their most impressive demonstrations of cleverness. And in the mass of anecdotes gathered by reliable investigators, the dog again comes out an easy winner.

Still, there are a number of apparently well-authenticated stories relating amazing instances of the smartness of cats. The English naturalist George J. Romanes, zoological secretary of the Lin-nean Society of London, England, tells of a cat whose master was in the habit of throwing out crumbs for the birds. The cat would hide in the shrubbery and attempt to pounce upon the birds as they ate. On one occasion, the crumbs were strewn in the evening. During the night they were covered by a light fall of snow. In the morning the owner saw the cat brushing away the snow and removing the crumbs to another spot, where it put them on top of the snow! Then it hid in the bushes and waited for the birds. This trick for the pack, it follows him faithfully and grieves in his absence. A cat that would follow its master would be a rare exception, though it sticks to familiar territory and hates a change of scene.

This also explains the obedience of the dog and its sense of responsibility. Being a gregarious animal, it seems to accept an outside standard of right and wrong conduct and to understand what is expected of it. When it breaks a rule, instead of being indifferent, it reveals its guilt unmistakably and will bear punishment. Even if the punishment is severe, it is so dependent upon its master’s company that it is usually willing and even anxious to be friendly again. The cat seems to have no ability to accept responsibility, and if punishment is attempted will either fight or flee.

THE emotional expression of the two animals also is almost exactly reversed, so that the same act may have quite a different meaning depending on which animal is studied. For example, a dog wags its tail as a sign of friendliness, but a cat wags or lashes its tail only when it is angry. Erection of the tail means excitement for the dog, as in pointing game or meeting a challenge, but the cat’s tail goes up when it seems most amiable, as when rubbing against its master’s leg.

Caress a dog and it sinks down with tail lowered, but stroke a cat and it stands upright. In fear, the dog goes flat to the ground, while the cat arches its back to such an angle that the fore and hind feet almost touch. In hunting, the dog prefers daylight, roams freely, and covers a wide territory; the cat as a rule lies silently in wait to pounce on its prey as it passes.

One physical characteristic the dog and cat seem to have in commonâ€”there is strong evidence that both are color blind. Though they can very often distinguish between colored objects, this is due not to the difference in color but to difference in brightness. The dog also is handicapped in vision by farsightedness. Since the retina of both animals lacks a fovea, or area of clear vision, it is probable that they see only vague shapes without the sharp outlines of human vision. If there is any advantage as to vision, it seems to lie with the cat. In hearing, however, and also in the ability to distinguish between faint odors, the dog is markedly superior.

THE dog has a larger brain than the cat, but it is the larger animal. In terms of capacity for training, such as minding sheep, carrying packages, standing guard, doing tricks, and so on, the dog again has a marked advantage. But is this due to greater intelligence or merely to a greater willingness to cooperate? The cat may not be interested in jumping through a hoop to please the teacher. On the other hand, it simply may not be smart enough. The present experiments at Columbia may furnish a definite answer.