American Magazine
Issue: Dec, 1937
Posted in: Advertisements
Tags: Listerine
No Comments on Don’t wait for a Cold to get a head start — go after it right away with LISTERINE. (Dec, 1937) 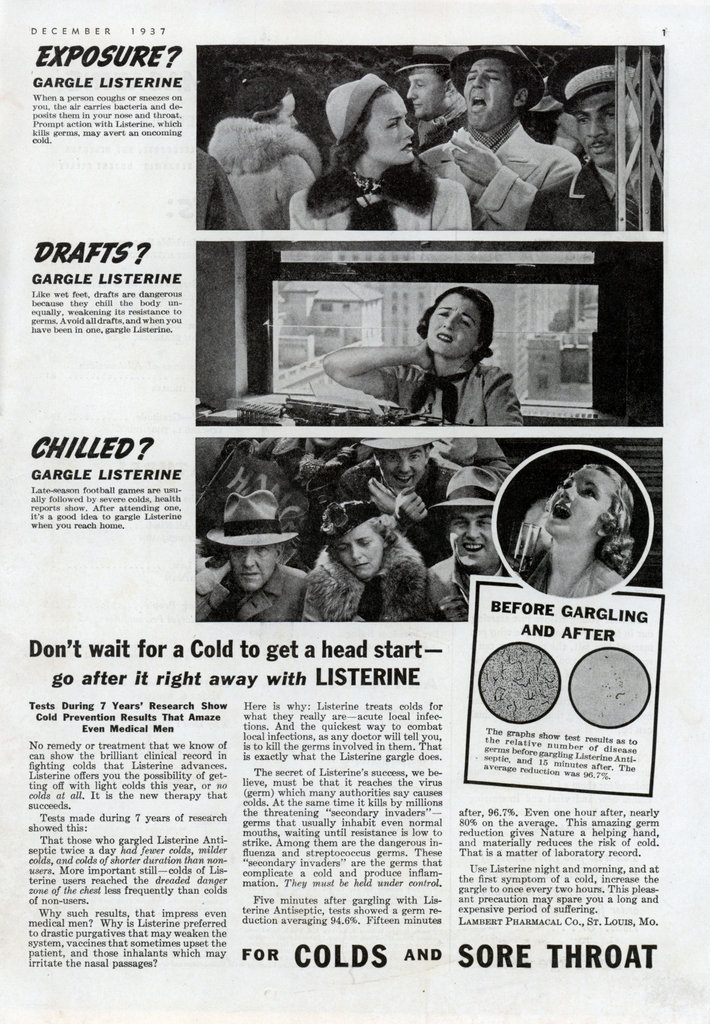 Don’t wait for a Cold to get a head start — go after it right away with LISTERINE.

EXPOSURE?
GARGLE LISTERINE
When a person coughs or sneezes on you, the air carries bacteria and deposits them in your nose and throat. Prompt action with Listerine, which kills germs, may avert an oncoming cold.

DRAFTS?
GARGLE LISTERINE
Like wet feet, drafts are dangerous because they chill the body unequally, weakening its resistance to germs. Avoid all drafts, and when you have been in one, gargle Listerine.

No remedy or treatment that we know of can show the brilliant clinical record in fighting colds that Listerine advances. Listerine offers you the possibility of getting off with light colds this year, or no colds at all. It is the new therapy that succeeds.

Tests made during 7 years of research showed this: That those who gargled Listerine Antiseptic twice a day had fewer colds, milder colds, and colds of shorter duration than non-users. More important still—colds of Listerine users reached the dreaded danger zone of the chest less frequently than colds of non-users.

Why such results, that impress even medical men? Why is Listerine preferred to drastic purgatives that may weaken the system, vaccines that sometimes upset the patient, and those inhalants which may irritate the nasal passages?

Here is why: Listerine treats colds for what they really are—acute local infections. And the quickest way to combat local infections, as any doctor will tell you, is to kill the germs involved in them. That is exactly what the Listerine gargle does.

The secret of Listerine’s success, we believe, must be that it reaches the virus (germ) which many authorities say causes colds. At the same time it kills by millions the threatening “secondary invaders”— germs that usually inhabit even normal mouths, waiting until resistance is low to strike. Among them are the dangerous influenza and streptococcus germs. These “secondary invaders” are the germs that complicate a cold and produce inflammation. They must be held under control.

Five minutes after gargling with Listerine Antiseptic, tests showed a germ reduction averaging 94.6%. Fifteen minutes after, 96.7%. Even one hour after, nearly 80% on the average. This amazing germ reduction gives Nature a helping hand, and materially reduces the risk of cold. That is a matter of laboratory record.

Use Listerine night and morning, and at the first symptom of a cold, increase the gargle to once every two hours. This pleasant precaution may spare you a long and expensive period of suffering.

for COLDS and SORE THROAT