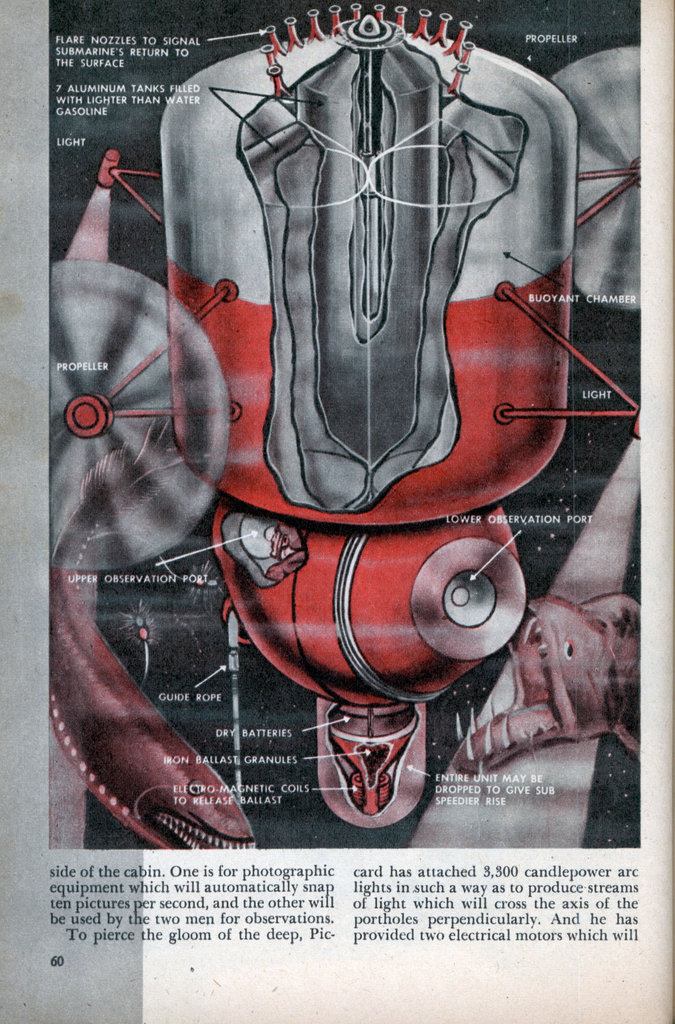 Yea, he’ll go down four miles BUT… will he come back up?

THE African sun slants its dawn rays across the Gulf of Guinea. From the deck of a ship a huge crane swings out over the water. Slowly it descends and with scarcely a ripple deposits the amazing thing on the ocean’s face.

Inside the Thing a little man with wide metal-rimmed glasses orders crisply: “Cut the ropes,” and the world’s strangest submarine, its only contact severed, begins it’s descent into the world of endless night in the ocean’s depths. Through the portholes the light of day fades quickly. The zoologist, the little man’s only companion, peers outside, scribbles his observations. Time passes.

The free swimming submarine is now miles below the surface, in the heart of the black deep which two powerful arc lamps turn into a wonderland of marine fantasy. A dozen hours have elapsed. His studies complete, the professor presses a switch and.

But here this narrative must stop.

Up to this point we know what will happen when the little man, who is Professor Auguste Piccard of stratosphere fame, makes his fateful experiment.

But will his invention, upon which he has worked for years, rise to the surface? The professor himself does not know. The answer will be flashed to the world from the west coast of Africa on a February morning when the professor attempts to descend four miles into the ocean, far deeper than the present record of 3,028 feet held by Professor William Beebe.

The steel sphere in which Piccard will make his perilous journey into the unknown weighs ten tons, is nearly seven feet in diameter and has walls three and one-half inches thick. Nevertheless, without ballast, it is lighter than sea water, and therein lies the professor’s hopes.

Without the lighter-than-water twist, the bathyvessel would plummet into the sea and be lost forever. For there will be no cable, such as was used by Beebe, to haul it back to the surface. A cable would permit Piccard’s sphere to dangle no deeper than Beebe went… if he went further the weight of the cable would almost certainly cause it to snap.

Piccard hopes to rise again through applying the balloon principle to his queer submarine. To the sphere Piccard has attached a boat-shaped float filled with 494 cubic feet of*a light, buoyant oil. This takes the place of the hydrogen gas bag on a balloon. Below it, held tightly by electro-magnets, are large chunks or iron ballast. If a speedy ascent is demanded, these large pieces of iron can be released, but the professor has arranged for a slow, controlled method of rising. In a large copper funnel he has placed hundreds of pounds of iron filings. When current to the electromagnet is cut, the filings flow out at the rate of 60 pounds a minute.

There are two plastic portholes, six inches thick, on each side of the cabin. One is for photographic equipment which will automatically snap ten pictures per second, and the other will be used by the two men for observations. To pierce the gloom of the deep, Pic- card has attached 3,300 candlepower arc lights in,such a way as to produce streams of light which will cross the axis of the portholes perpendicularly. And he has provided two electrical motors which will move the sphere forward or backward. The speed will be low, about five inches per second.

Professor Piccard hopes to enrich immeasurably science’s presently limited knowledge of the ocean’s depths. Virtually all that man knows has been gleaned from the admittedly unsatisfactory soundings and net castings from surface ships. Divers have not been able to go deep enough or stay long enough. Beebe alone has ventured clown but, thinks Piccard, not far enough.

And so the eminent professor, who was the first to soar ten miles into the stratosphere, is poised to set another record, destination downward—round trip preferred. February will tell.