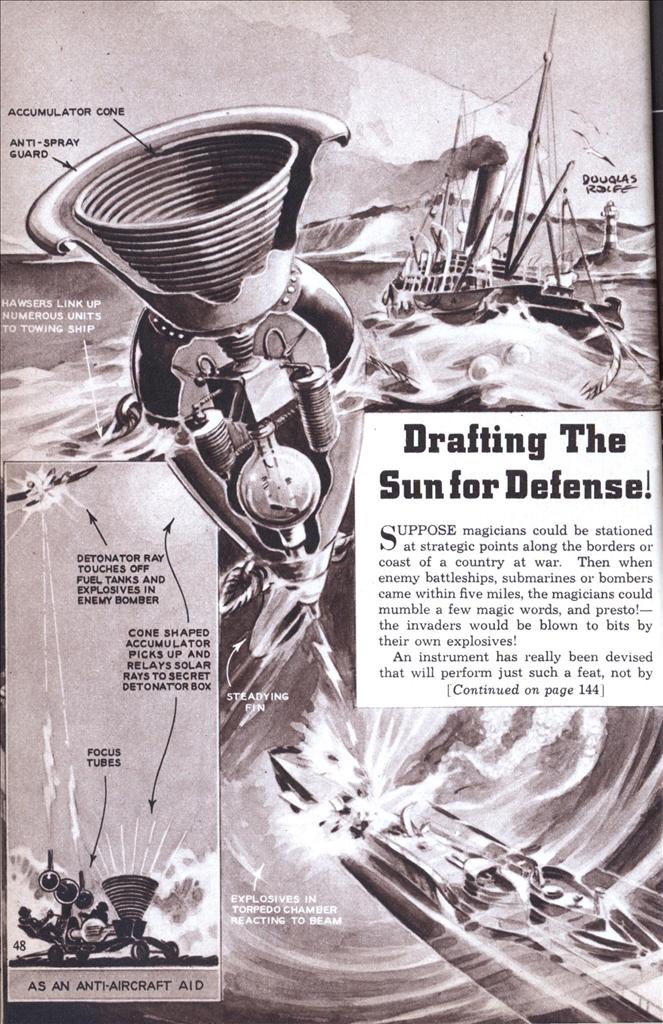 Drafting The Sun for Defense!

SUPPOSE magicians could be stationed at strategic points along the borders or coast of a country at war. Then when enemy battleships, submarines or bombers came within five miles, the magicians could mumble a few magic words, and presto!— the invaders would be blown to bits by their own explosives!

An instrument has really been devised that will perform just such a feat, not by hocus pocus, but by utilizing natural physical laws to ignite explosives at a distance without the use of wires or any other direct contact. Otto H. Mohr, inventor of the submarine detector, is the originator of the Solar Mohr Detonator, and has successfully demonstrated it to Army officials.

Recently a group of United States Army experts gathered in the hills near Oakland, California, to witness a test of the Detonator. Several times in previous months they had watched demonstrations of the instrument, and they came prepared to put it to tests of their own devising.

Canvas bags containing charges of powder used to fire a one pound shell were placed in the middle of a field. Twenty feet, away Mr. Mohr stood by his model Detonator, a cubical measuring about two feet. He adjusted a cone-shaped antenna on top until a metal tube in its core pointed to the sun. A gentle buzz from within indicated that it was in exact position, then a dim light appeared in a tube extending from the front of the instrument. The inventor focused this tube in the direction of the bags of powder. Nine minutes later the powder exploded. Other tests devised by the officers convinced them that the Detonator is a remarkable and practical defense weapon, and they recommended favorable consideration by the United States Army.

Mr. Mohr stumbled onto the Detonator Ray by accident. While working on another instrument which utilized solar energy, a small amount of powder nearby exploded. It took five years to discover the secret of this accident and to construct an instrument to command and control the principle of remote detonation.

Did you ever focus the sun’s rays to pin-point intensity with a lens and set fire to paper or straw? That, very roughly, is the underlying principle of the Detonator. The cone-shaped antenna on top gathers the sun’s magnetic force which has transformed inside the instrument to motivated vibratory currents. These vibrations are synchronized or “tuned” to the atomic vibrations of the explosive substance and sent on a beam from the focusing tube in the direction of the target.

Four secret essentials control the Detonator, and to safeguard the invention, Mr. Mohr dismantles it after every demonstration.

A bright, sunny day is not essential to the use of the Detonator, but the brighter days make, it possible to gather more solar energy in less time, thus shortening the time it takes to explode the target. But any amount of sunlight is effective. It is possible, too, that a mercury arc may some day be substituted at night for solar energy.

The explosive principle is similar to that causing combustion when two sticks are rubbed together rapidly; the energy vibrations from the sun’s magnetic force which is transferred along the beam, set up a friction with the explosive elements. They become hot, and hotter, then explode.

Explosive substances used in ammunition are always compounds of several elements—gun powder is a combination of potassium nitrate, sulphur and charcoal—but any explosive with a hydrocarbon base is subject to the Detonator Ray. However, there is one requirement: the atomic vibration of the constituents must be known so that the Detonator may be “tuned” to effective action. Otherwise the solar vibrations would slide past the explosive’s atoms without the friction essential to explosion.

Another improvement that is being worked on is the extension of the distance at which the Detonator will be effective. It is like the projecting of shot from a cannon; the greater the power behind the shot, the farther and harder it will be sent. The inventor believes that the beam of the Detonator may be extended to the reach of light rays; approximately forty miles on a level with the horizon, when sufficient solar energy can be accumulated.

When larger, more powerful models of the Detonator are built, invading machines will have small chance of coming within shooting or bombing distance of the United States. Battleships or tanks would be spontaneously blown up by their own ammunition, and bombers would be destroyed by the very missiles they planned to drop on others.