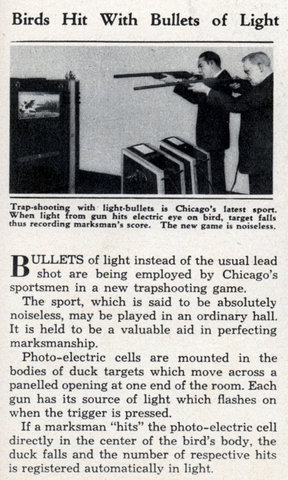 Birds Hit With Bullets of Light
BULLETS of light instead of the usual lead shot are being employed by Chicago’s sportsmen in a new trapshooting game.
The sport, which is said to be absolutely noiseless, may be played in an ordinary hall. It is held to be a valuable aid in perfecting marksmanship.
Photo-electric cells are mounted in the bodies of duck targets which move across a panelled opening at one end of the room. Each gun has its source of light which flashes on when the trigger is pressed.
If a marksman “hits” the photo-electric cell directly in the center of the bird’s body, the duck falls and the number of respective hits is registered automatically in light.