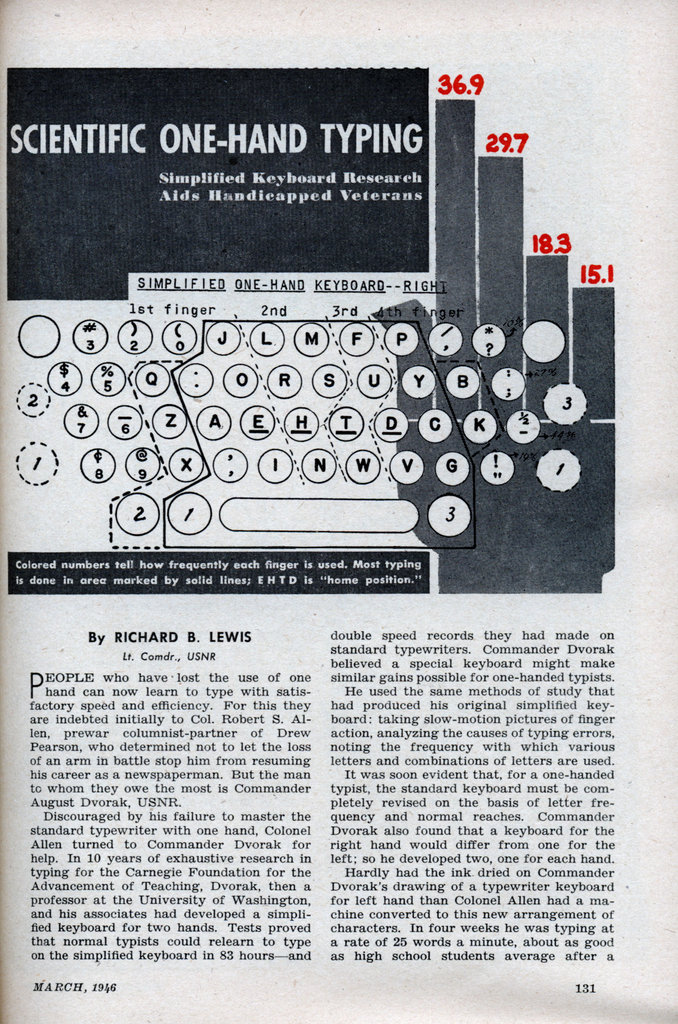 PEOPLE who have lost the use of one hand can now learn to type with satisfactory speed and efficiency. For this they are indebted initially to Col. Robert S. Allen, prewar columnist-partner of Drew Pearson, who determined not to let the loss of an arm in battle stop him from resuming his career as a newspaperman. But the man to whom they owe the most is Commander August Dvorak, USNR.

Discouraged by his failure to master the standard typewriter with one hand, Colonel Allen turned to Commander Dvorak for help. In 10 years of exhaustive research in typing for the Carnegie Foundation for the Advancement of Teaching, Dvorak, then a professor at the University of Washington, and his associates had developed a simplified keyboard for two hands. Tests proved that normal typists could relearn to type on the simplified keyboard in 83 hoursâ€”and double speed records they had made on standard typewriters. Commander Dvorak believed a special keyboard might make similar gains possible for one-handed typists.

He used the same methods of study that had produced his original simplified keyboard: taking slow-motion pictures of finger action, analyzing the causes of typing errors, noting the frequency with which various letters and combinations of letters are used.

It was soon evident that, for a one-handed typist, the standard keyboard must be completely revised on the basis of letter frequency and normal reaches. Commander Dvorak also found that a keyboard for the right hand would differ from one for the left; so he developed two, one for each hand.

Hardly had the ink dried on Commander Dvorak’s drawing of a typewriter keyboard for left hand than Colonel Allen had a ma-chine converted to this new arrangement of characters. In four weeks he was typing at a rate of 25 words a minute, about as good as high school students average after a year’s instruction on standard typewriters, far better than any one-handed typist had been able to do on a standard keyboard.

There are still four rows of keys on the new keyboard, but the keys used in 99 percent of all ordinary typing are concentrated in the center. That is the secret of its success. Painstaking calculations have determined the frequency with which individual keys and sequences of letters are used in most writing. As a result, one finger seldom strikes several keys in succession and the fingers share the work in a natural order.

Any standard typewriter can be converted to the new keyboard for one hand, either right or left, and new typewriters, with the keyboards installed, can be obtained. The U. S. Navy has ordered some for the purpose of teaching typing at the Philadelphia Naval Hospital to amputees who are interested. If this program proves successful, a similar one will be established at all Naval Rehabilitation Centers.

Devices have been developed for both manually and electrically operated typewriters (see page 133) to make it easier for one-handed typists to operate the capital shift and lock on the new keyboards.

Exercises for practice have been prepared that enable a one-handed typist to type a limited number of words and sentences after the first 30 minutes of practice. After the typist has done the 24 key-position exercises, he knows the keyboard well enough to type effectively; from that point on, his speed depends on the extent of his practice.

If you want to see what it is like to use the new keyboard for one hand, write the following sentence on your standard typewriter with the right hand alone: “As we look at the one-hand typewriter our hopes increase.” Now, rest the fingers of your right hand on G H J K; this is where the “home position,” so necessary to touch typing, is located on the keyboard for right hand. Type this: “Fu mg 6tt; fj jhg tng hfnk jo9gmybjgy tiy ht9gu bnlygfugr”

Although the writing makes no sense on your standard keyboard you have actually written the above sentence on the proper key positions of the new keyboard for right hand. See the difference?