This article gives a nice overview of the technological challenges that had to be overcome to make HDTV commercially viable. At the time this article was written there wasn’t even a tape drive that could support the bandwidth needed for a digital HDTV stream. Not to mention the hardware needed to encrypt all that digital content in real-time to comply with HDCP.

We did get our HDTV, though not in the 1980’s as the article predicts. 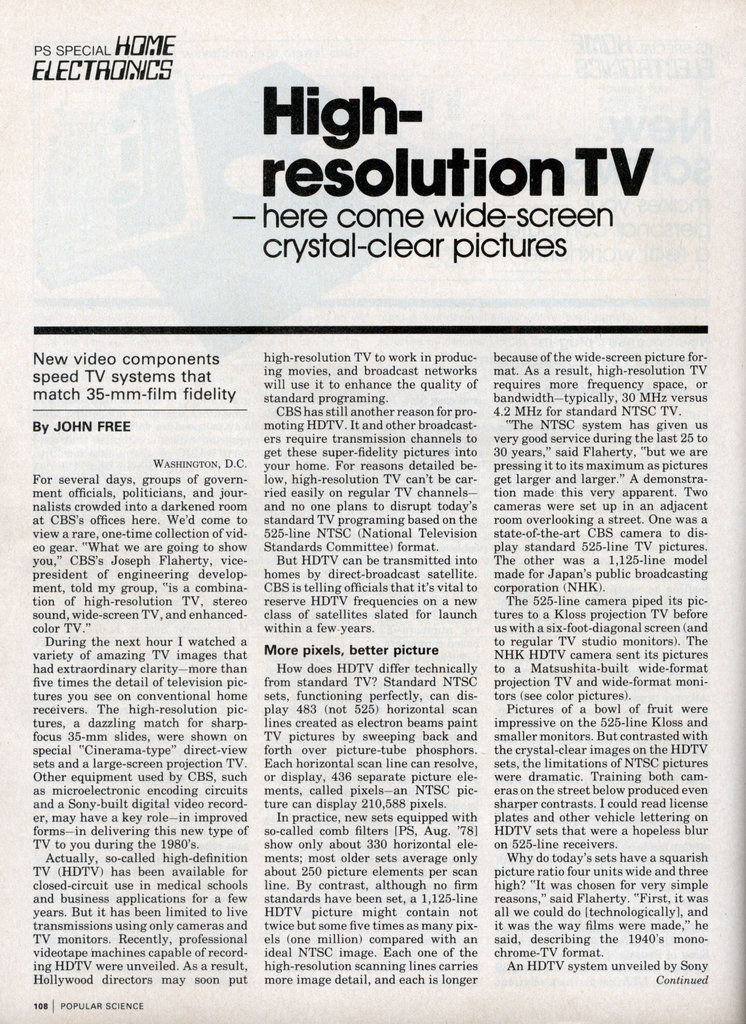 For several days, groups of government officials, politicians, and journalists crowded into a darkened room at CBS’s offices here. We’d come to view a rare, one-time collection of video gear. “What we are going to show you,” CBS’s Joseph Flaherty, vice-president of engineering development, told my group, “is a combination of high-resolution TV, stereo sound, wide-screen TV, and enhanced-color TV.”

During the next hour I watched a variety of amazing TV images that had extraordinary clarityâ€”more than five times the detail of television pictures you see on conventional home receivers. The high-resolution pictures, a dazzling match for sharp-focus 35-mm slides, were shown on special “Cinerama-type” direct-view sets and a large-screen projection TV. Other equipment used by CBS, such as microelectronic encoding circuits and a Sony-built digital video recorder, may have a key roleâ€”in improved formsâ€”in delivering this new type of TV to you during the 1980’s.

Actually, so-called high-definition TV (HDTV) has been available for closed-circuit use in medical schools and business applications for a few years. But it has been limited to live transmissions using only cameras and TV monitors. Recently, professional videotape machines capable of recording HDTV were unveiled. As a result, Hollywood directors may soon put high-resolution TV to work in producing movies, and broadcast networks will use it to enhance the quality of standard programing.

CBS has still another reason for promoting HDTV. It and other broadcasters require transmission channels to get these super-fidelity pictures into your home. For reasons detailed below, high-resolution TV can’t be carried easily on regular TV channelsâ€” and no one plans to disrupt today’s standard TV programing based on the 525-line NTSC (National Television Standards Committee) format.

But HDTV can be transmitted into homes by direct-broadcast satellite. CBS is telling officials that it’s vital to reserve HDTV frequencies on a new class of satellites slated for launch within a few years.

In practice, new sets equipped with so-called comb filters (PS, Aug. 78] show only about 330 horizontal elements; most older sets average only about 250 picture elements per scan line. By contrast, although no firm standards have been set, a 1,125-line HDTV picture might contain not twice but some five times as many pixels (one million) compared with an ideal NTSC image. Each one of the high-resolution scanning lines carries more image detail, and each is longer because of the wide-screen picture format. As a result, high-resolution TV requires more frequency space, or bandwidthâ€”typically, 30 MHz versus 4.2 MHz for standard NTSC TV.

“The NTSC system has given us very good service during the last 25 to 30 years,” said Flaherty, “but we are pressing it to its maximum as pictures get larger and larger.” A demonstration made this very apparent. Two cameras were set up in an adjacent room overlooking a street. One was a state-of-the-art CBS camera to display standard 525-line TV pictures. The other was a 1,125-line model made for Japan’s public broadcasting corporation (NHK).

Pictures of a bowl of fruit were impressive on the 525-line Kloss and smaller monitors. But contrasted with the crystal-clear images on the HDTV sets, the limitations of NTSC pictures were dramatic. Training both cameras on the street below produced even sharper contrasts. I could read license plates and other vehicle lettering on HDTV sets that were a hopeless blur on 525-line receivers.

Why do today’s sets have a squarish picture ratio four units wide and three high? “It was chosen for very simple reasons,” said Flaherty. “First, it was all we could do | technologically 1, and it was the way films were made,” he said, describing the 1940’s monochrome-TV format.

An HDTV system unveiled by Sony last spring can show pictures in standard 4:3 format, the extra-wide Cinemascope format, or an intermediate picture width. The high-resolution sets at the CBS demonstration had a 5:3 picture-aspect ratio. In addition to letting you see most or all of the picture from wide-screen movies, sitting close to sharp, wide-screen HDTV images conveys more of the visual impact of a theater screen.

Warming up in another CBS office was a special type of videotape recorder completed by Sony just six weeks earlier. Bill Connolly, managing director of development for the CBS-TV network, prefaced another impressive demonstration: “Engineers today are generally agreed that digital techniques are the proper way to record this HDTV information and transmit it,” he said [PS, March ’78]

“The digital system does something quite different,” Connolly said. The voltage generated by the camera is constantly sampled or measured by digital circuits. Each of these samples is then assigned a binary number (zeros and ones) representing its intensity. This technique for each pixel on the scan lines requires considerably more bandwidth, or frequency spectrum, for storage and transmission. While this large-bandwidth requirement is a problem, major efforts are under way to shrink the frequency space needed for digital TV.

“One of the things we can do is reduce the number of bits [binary digits] necessary to describe a picture,” Connolly said. He pointed to one of his “favorite symbols,” a CBS eye glowing on monitors. Running his finger across one scan line on the eye, he explained that it carried about 150 black pixels, then 200 blue, and 150 black ones again.

“We waste a lot of [frequency] spectrum with analog TV because we transmit every one of those things using the whole bandwidth,” Connolly said. With digital techniques, though, a single brief signal can be encoded that tells the digital circuits in the receiver to create 150 black pixels. This coding of the digital signal, requiring perhaps only a few dozen bits instead of hundreds of repetitive signals, cuts the rate at which bits must be transmittedâ€”plus bandwidth requirements. Similar bit-rate-reduction coding can produce the 200 blue and 150 black pixels for an “eye” scan line.

John Rossi of the CBS Technology Center (Stamford, Conn.) demonstrated a CBS 4:1 bit-rate-reduction system with an analog videotape machine. An NTSC 525-line test pattern shown on monitors was created by a digitally coded signal that required only 28 megabits (million bits) per second instead of the 144 megabits/sec. from the original digital sampling.

“This is a very simple bit-rate-reduction technique,” Rossi said. “The circuits can literally be held in the palm of your hand. This leads us to believe that with more-complex circuits much higher bit-rate reductions can be achieved.”

“Failing these bit-reduction schemes, HDTV will not be broadcast-able,” added Flaherty. He hopes to fit digitally compressed high-resolution TV into a normal or nearly normal TV channel. “Much work has yet to be done,” he said, “but you can see we’ve achieved a 4:1 reduction in bits fairly well, transmitting a roughly equal-quality picture.”

That test-pattern picture I saw had some noise but carried the fine detail indicating most of the image was getting through. For this demonstration, a normal 4.2-MHz, 525-line NTSC signal became a 114-megabit/sec. digital signal that was compressed into a 28-megabit/sec. signal. But that digital 525-line signal would require about four VHF channels on your TV set. An HDTV signal, even before it’s digitally sampled, requires about five.

Why, if digital coding of a TV signal takes up so much more frequency spectrum, isn’t high-resolution TV more feasible with analog signals? High-frequency noise is one reason. Noise, which can spoil standard TV images, devastates HDTV.

Connolly demonstrated another advantage of digital TV by first showing a 525-line analog-signal picture of a fruit bowl from tape. Then he showed the same picture after it had been rerecorded 10 timesâ€”a tenth-generation copy. The image was smeared, full of noise, and color values were shifted. For broadcasting, about five generations is the limit, he said.

But scenes that followed from tenth-and even twentieth-generation digitally coded tapes seemed unaltered from the originals. Connolly compared analog taping to pouring water from one glass to others: Some water sticks to each glass; retaping, similarly, robs parts of the original signal with each generation.

Digital signals, by contrast, are either the presence or absence of pulses on tape. They survive transmission and taping much better, and Connolly compared the digital technique to pouring marbles from glass to glass. The marbles (digital bits) get through unchanged.

CBS engineers were impressed with Sony’s new digital recorder. “In just seven years there’s been a 50:1 improvement in the ability to jam bits into a small area of tape,” said Flaherty. “We went from under one million [bits] per square inch to 40 million.

We only need a 3:1 improvement over that to record [digital] HDTV.”

CBS also presented an NTSC videotape made with stereo sound at a Kennedy Center concert. HDTV researchers believe stereo is needed to bring the realism of wide-screen movies and other programs into your home. During the demonstration of a Mozart operatic aria, repeated switching between stereo and monophonic modes made stereo’s advantages obvious.

You may first encounter HDTV not on a TV receiver but displayed on a theater movie screen. Sony might lease its prototype HDTV gear within a year for Hollywood production work that would be converted to film. Videotaping offers advantages in economy and flexibility.

In a different application, CBS plans to use HDTV in about three years to enhance standard broadcasts: HDTV tapes would permit special production techniques, such as image enhancement and zooming without picture degradation, before conversion to regular NTSC recordings.

Also, cable TV and home videodiscs and tapes may bring HDTV to you in the 1980’s. You would need a special receiver or player, but such sources could bypass the standards and regulatory problems of broadcast HDTV.

“The real question is whether this is going to be available to the general public or whether it will be something only for the videophile with the money to buy all these ancillaries,” said Flaherty. Getting wide-band HDTV into broadcast channels, he said, “depends on the skill of the engineering community to make it fit.”