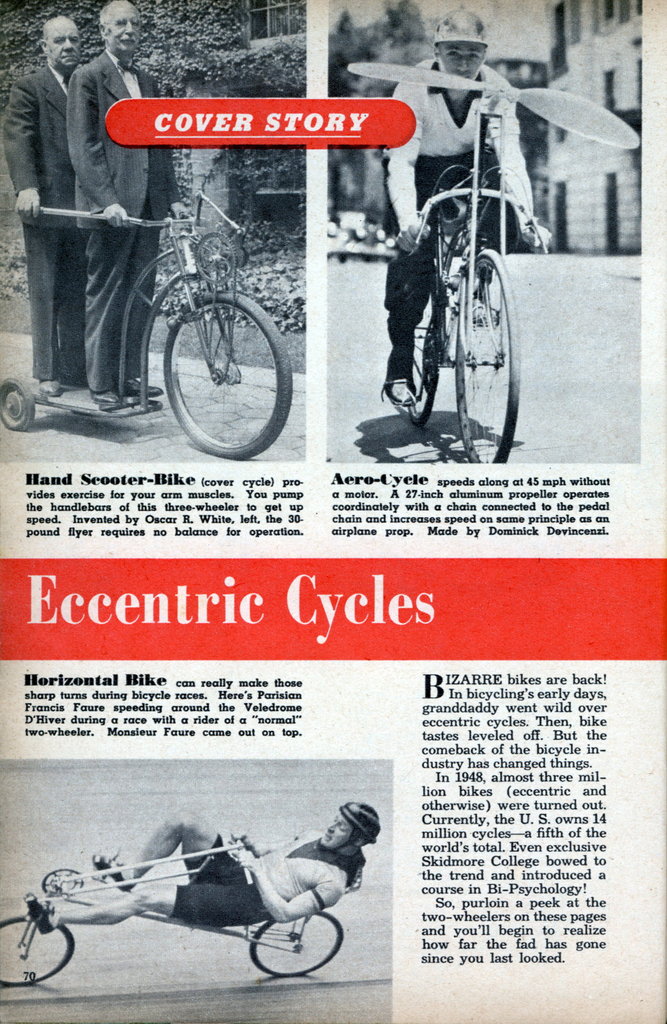 BIZARRE bikes are back! In bicycling’s early days, granddaddy went wild over eccentric cycles. Then, bike tastes leveled off. But the comeback of the bicycle industry has changed things.

In 1948, almost three million bikes (eccentric and otherwise) were turned out. Currently, the U. S. owns 14 million cycles – a fifth of the world’s total. Even exclusive Skidmore College bowed to the trend and introduced a course in Bi-Psychology!

So, purloin a peek at the two-wheelers on these pages and you’ll begin to realize how far the fad has gone since you last looked.

Hand Scooter-Bike (cover cycle) provides exercise for your arm muscles. You pump the handlebars of this three-wheeler to get up speed. Invented by Oscar R. White, left, the 30-pound flyer requires no balance for operation.

Aero-Cycle speeds along at 45 mph without a motor. A 27-inch aluminum propeller operates coordinately with a chain connected to the pedal chain and increases speed on same principle as an airplane prop. Made by Dominick Devincenzi.

Horizontal Bike can really make those sharp turns during bicycle races. Here’s Parisian Francis Faure speeding around the Veledrome D’Hiver during a race with a rider of a “normal” two-wheeler. Monsieur Faure came out on top.

Tomorrow-Cycle is a British-built machine which has a dynamo and motor set storing energy while traveling downhill and releasing it on upgrades. This lightweight oddity was designed by B. G. Bowden of Leamington Spa. England.

Radio-Bike: a bag in the rear holds the batteries for a four-tube radio. Paul Bayrad, a mechanic of Veray-Sur-L’ognan, France, is the owner-designer-builder of this 56-pound motor bike which allows him to listen to favorite programs.

Lovers’-Cycle is a two-seater upon which couples sit side-by-side. Each rider uses one arm and one foot, leaving the other free for non-cycling activities. Lovers were too shy to face camera.

Family-Cycle comes next in chronological order. It’s made of two ordinary bikes welded together with a small baby carriage between them. It was built by Roy S. Henrich of St. Louis. Mo.