Life
Issue:
Posted in: General
Tags: environment
10 Comments on ECOLOGY a cause becomes a mass movement ()

ECOLOGY a cause becomes a mass movement ()

Well, the timeline was a bit off, but I think there can be little doubt that SSTs are responsible for the autism “epidemic”.

Disregarding the timeline, if you polled people in 1970, I wonder which of these they would have thought would be the biggest issue today. 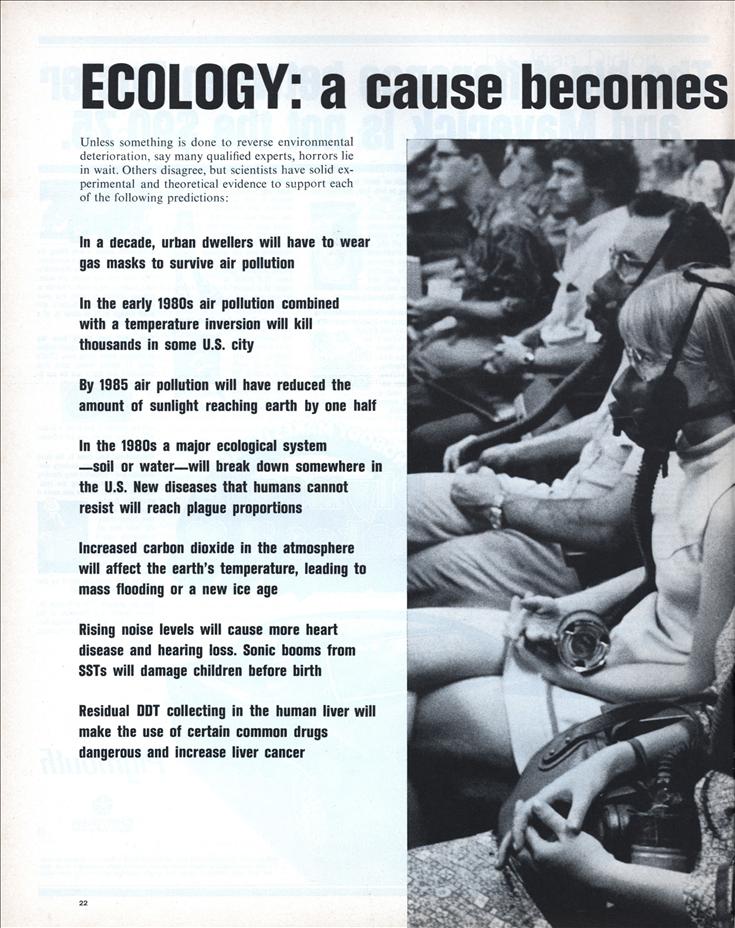 ECOLOGY: a cause becomes a mass movement

Unless something is done to reverse environmental deterioration, say many qualified experts, horrors lie in wait. Others disagree, but scientists have solid experimental and theoretical evidence to support each of the following predictions:

In a decade, urban dwellers will have to wear gas masks to survive air pollution.

In the early 1980s air pollution combined with a temperature inversion will kill thousands in some U.S. city.

By 1985 air pollution will have reduced the amount of sunlight reaching earth by one half.

In the 1980s a major ecological system —soil or water—will break down somewhere in the U.S. New diseases that humans cannot resist will reach plague proportions.

Increased carbon dioxide in the atmosphere will affect the earth’s temperature, leading to mass flooding or a new ice age.

Rising noise levels will cause more heart disease and hearing loss. Sonic booms from SSTs will damage children before birth.

Residual DDT collecting in the human liver will make the use of certain common drugs dangerous and increase liver cancer.

In the fall of 1963 President Kennedy, on a tour through the Western states, delivered a conservation speech in Ashland, Wis. It was greeted with a yawn. The subject bored him, it bored the audience, and for the rest of the trip he talked about the atomic test ban treaty. During the 1968 presidential campaign, conservationists pleaded with all the candidates to speak out on environment but received the barest response. None of them did until late in the campaign, and even then the issue never became a major one.

Today, in a matter of months, conservation has emerged forcefully as a potent political issue, under the name of ecology, a term referring to the relationship between environment and life. The issue may well dominate the new decade. Last week President Nixon devoted a major portion of his State of the Union address to it. Both the regular press and the underground press print stories daily about ecology. On the far right, members of the John Birch Society are decrying pollution in language similar to that used by the radical left. College students are forming conservation organizations to demand, and often get, environmental courses. On April 22 an environmental teach-in is scheduled; it may involve as many as 1,000 campuses.

Ecology is one major political issue on which the country may be united. It is as insistent as the environmental destruction all around us: the smog that makes our eyes smart, the food we are wary of eating because of pesticides, the rivers and lakes we can no longer swim in or fish in. The tide of information about pollution has left us no excuse for not knowing what we have been doing to ourselves. For the first time in history we are being forced to recognize that the earth is a finite resource, and the public response to this tremendous fact promises to shake American society. “The politics of environment,” says Social Anthropologist Luther Gerlach, “will be the biggest mass movement in the history of this country.” The movement has begun.

‘We need a flood of new laws’
Public enthusiasm for conservation has far outraced the laws necessary to make conservation work. However, environmental law is the fastest-growing legal field today. This year one out of five of the nation’s 65,000 law students will take courses in the field, most of them new. A variety of cases passing through the courts, plus proposals awaiting legislative action, promise to establish a number of useful principles. According to David Sive of New York, one of the nation’s leading environmental lawyers, a basic point yet to be settled is whether there is a constitutional right to a decent environment. So far, no court has granted this. In the meantime, conservation groups are attempting to secure more legal control of planning agencies and more adequate court review of their decisions. “But,” says Sive, “we also need a flood of new laws defining the people’s rights in land, water and air.”