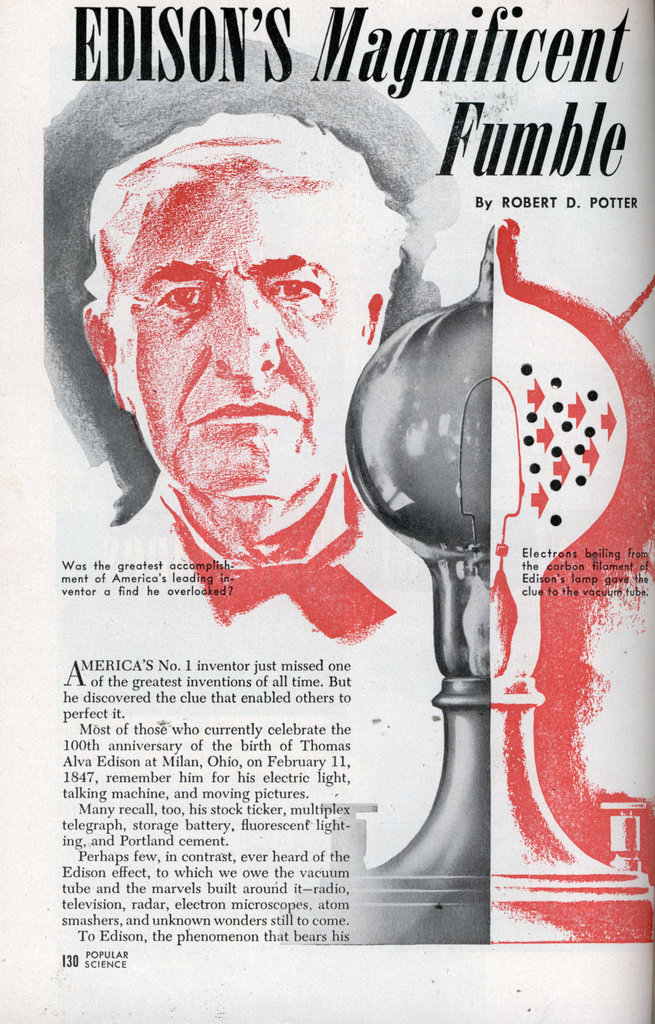 To Edison, the phenomenon that bears his name was no boon, but an unmitigated nuisance. Back in 1883, the Wizard of Menlo Park was fretting over his electric lamp. It burned brightly for a time, then sputtered and went out. Its bulb blackened. Something was carrying the very substance of the filament across empty space to the glass.

Edison inserted a metal plate in a lamp bulb, and attached a current meter. Its needle swung. Jotting down his observation, the busy inventor hastened away to other experiments of more obvious practical importance. Had he only known it, he had in his grasp the key to the whole vast science of electronics. For the meter proved that the filament was “boiling off” charged particlesâ€”electrons, we call them now. And they would How in only one direction, from the filament to the plate.

More than two decades later, a British physicist, J. Ambrose Fleming, awoke to the significance of this Edison effect. It provided, he realized, a one-way valve for converting alternating into direct current. Embodied in his diode or two-element vacuum tube of 1904, it supplied the practical means of detecting wireless waves that the world had been waiting for. In 1907, Dr. Lee de Forest added a third elementâ€”a grid to control the current flow between filament and plateâ€”and obtained, in his triode or audion, an amplifier that augmented the volume of faint reception until it could be clearly heard. Listeners took off their earphonesâ€”and wireless, given new ears and voice, became modern radio.

Just as truly as Fleming’s diode and de Forest’s triode became the main branches of the mighty family tree of electronics, so the Edison effect gave root to it. In a very real sense, the major types of vacuum’ tubes shown with their applications on these pages are Edison’s unwitting brain children â€”and his greatest claim to fame may well be the discovery of a principle that will live on, even after all the inventions he made himself have been superseded by later developments and have passed from memory.