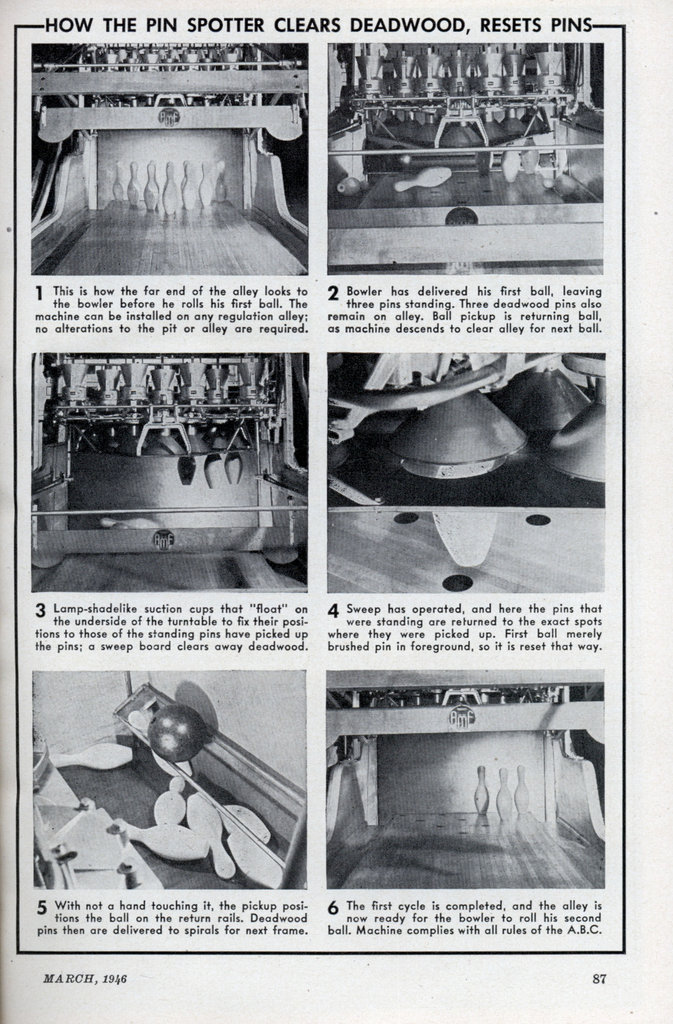 A MAN who wouldn’t give up after everyone else had failed has produced what bowlers the world over have wanted ever since the game was invented a machine that will “spot” tenpins on the alley.

With Fred Schmidt’s automatic pin spotter, a bowler can spill the maple 24 hours a day if he wants to, and the machine will set ’em up, rake off the deadwood, and return the ball with the regularity of the tides. It distinguishes between strikes and spares, and can even be equipped to call fouls. Furthermore, it protects itself from balls thrown wildly. Unlike pin boys, this robot never has to go home. It is being manufactured by the American Machine and Foundry Co., and will be seen in action this month at the American Bowling Congress tourney in Buffalo.

It is as fast as the best pin boys 7-1/2 to nine games an hour can be played with it  and finicky bowlers can rest assured that no hands but their own will even touch the ball.

The pin spotter operates electrically, mechanically, and by suction. An electrical switch starts the two cycles of the machine in operation, one after the first ball is thrown and the other after the second ball. A 1/2-horsepower motor hoists the ball to the return track; sweeps the alley bed clear of pins; spots a new set of pins; gathers up the dead pins, and, using them as a reserve set for the next frame, racks them for delivery to the alley bed, and lifts the machinery clear of the alley for. play. Suction cups pick up spare pins by their heads and replace them after the deadwood has been cleared out of the way.

An extra feature of the machine is the flashing of a signal that means a player has crossed the foul line. A judge also can call a foul merely by pressing a button. Schmidt knew that his idea for the pin spotter was not perfect until he hit on the suction pickup. The cups “float” on a platform. That permits them to pick up pins that are off spot. While this is being done, a guard rail is laid across the alley by the machine to fend off any delivered balls.

Schmidt worked on the pin spotter for a decade before he made it do exactly what he wanted. He was not satisfied until he could draw a pencil line around the base of a pin and watch the machine replace the pin with an accuracy of hundredths of an inch. Previous to the time he began trying to devise a pin spotter, other inventors and engineers had been trying to make one for thirty years.

They encountered sundry troubles, but most of them had to do with respotting. Then Schmidt hit on the suction idea. His first machine was set up in a farm building that had been used to house turkeys, and was made, in part, out of ten-cent-store lamp shades and those cone-shaped metal containers used for graveyard flowers.