Electronic Highway of the Future (Apr, 1958) 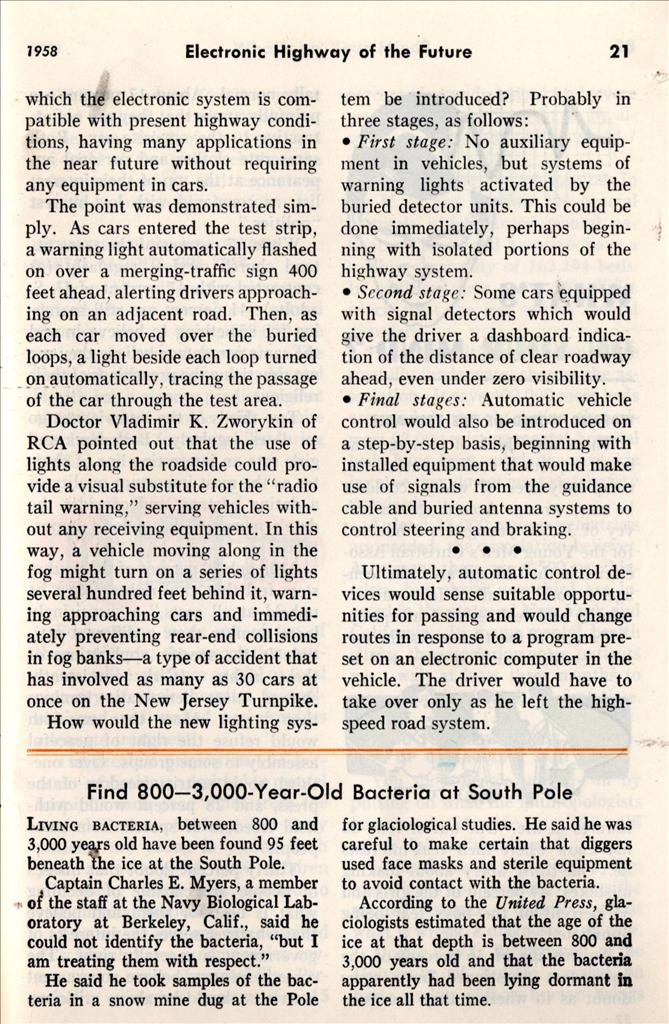 Electronic Highway of the Future

Some day in the future when you drive onto a superhighway, you’ll reach over to your dashboard and push the button marked “Electronic Drive.” Selecting your lane, you’ll settle back to enjoy the ride as your car adjusts itself to the prescribed speed. You may prefer to read or carry on a conversation with your passengers—or even to catch up on your office work. It makes no difference for the next several hundred miles as far as the driving is concerned.

Fantastic? Not at all. The first long step toward this automatic highway of the future was successfully illustrated recently by the Radio Corporation of America and the State of Nebraska on a 400-foot strip of public highway just outside Lincoln, Neb.

Both unequipped vehicles and a test car with special receiving equipment were used to demonstrate the immediate uses and the ultimate possibilities of electronic highway control.

Connected to a series of experimental detector circuits buried in the pavement were a series of lights along the edge of the road. In the test car was equipment consisting of special radio receivers and audible and visual warning devices able to simulate automatic steering and brake control.

In a series of tests, the installation at Lincoln proved its ability to perform the following: Provide automatic warning to a driver following too closely behind another vehicle, Indicate to a driver the presence of a parked vehicle or other obstacle in the highway ahead, Guide a car accurately along its traffic lane even under conditions of zero visibility for the driver, Cause remote operation of warning lights ahead at points of merging traffic, or along the roadside for any distance ahead of or behind a moving vehicle not equipped with special equipment.

The demonstration made two major points. First: the various elements of the system can be used immediately in conjunction with roadside and intersection lights to increase driving safety under present conditions, without requiring special equipment on cars or trucks.

Second: the system as a whole can be developed without major technical complications into a fully automatic highway traffic control system.

Operating the system of the future will be as simple as it seems fantastic. Electrical signals will radiate from wires buried beneath the pavement to be picked up by the tiny transistorized receivers built into the car. On one frequency will come the signals from the guidance cable, controlling the power-steering mechanism that keeps the car in its lane.

Signals on another frequency will warn of obstructions on the highway half-a-mile or a mile ahead—perhaps a stalled vehicle, or a highway maintenance crew at work. Signals picked up by another receiver in the car, will operate automatic controls that will reduce your speed, apply the power brakes, or guide the car automatically into the next lane to pass the obstruction.

Operating on a third frequency, a special highway receiver on the dashboard will cut off the standard car * i radio to make an announcement of its own: “Exit Number Three for Pittsburgh area is five miles ahead. Connections at this exit with Routes 19 and 28. Please watch roadside signs for further directions.”

Approaching the exit the radio will again cut in with an announcement supplementing the roadside signs. “Exit Number Three for Pittsburgh area is two miles ahead. Motorists for Exit Three please switch off electronic drive and move to exit lane at extreme right.” The motorist will simply push a button to switch the car to manual control. He will then move into the right lane to approach the exit and leave the superhighway.

Behind the demonstrations at Lincoln, is a story of imagination and enterprise in two widely separated locations.

The electronic highway control system is itself the conception and development of an RCA Laboratories’ team. It is based on a concept demonstrated in 1953.

At that time, the principles were successfully applied in a small-scale system in which wires laid in a pattern on a laboratory floor were used to guide and control a miniature car.

The system sparked the imagination of Leland M. Hancock, traffic engineer in the Nebraska Department of Roads, and of his director, L. N. Ress, state engineer. The decision was made to experiment with the system in actual highway installations.

Opportunity presented itself with the construction of a new main’ intersection of U. S. Route 77 and Nebraska Highway 2 on the outskirts of Lincoln. As the pavement was laid, the necessary wiring was buried, preparing the ground for the experimental work.

What the observers saw at the first public demonstration was a system comprising three basic elements:
1) a sequence of detectors installed at intervals slightly greater than car length along the road, capable of reacting to the passage of cars;
2) a radio warning system for following vehicles, controlled by a signal from the detectors;
3) a guidance system to keep each vehicle centered in its lane.

The detectors consist of rectangular loops of wire, 6 by 20 feet, buried in the pavement in the traffic lane, and coupled to an associated circuit at the edge of the road. The loop carries a voltage from a high-frequency power line. Whenever a vehicle passes over the loop, the result is a variation in current which is detected by the roadside circuit. The circuit then produces an output signal that controls an indicating device, such as a warning light, and at the same time switches on the radio warning system which safeguards following vehicles.

This continues for a certain interval of time after the vehicle has passed, so that the antenna radiates a “radio tail warning” behind cars as they move along the highway. The tail warning signals can be used to actuate warning lights along the side of the road, or they may be picked up by following cars with appropriately tuned receivers that can activate automatic control of brakes.

The guidance system is a cable laid down the center of the traffic lane beneath the pavement, carrying a signal current of yet another radio frequency. To use the continuous signal, a car is equipped with small receiving antennas mounted at either end of the front bumper or on both front fenders. These antennas are connected to a receiver which responds when it receives two signals of differing intensities.

As long as the car is centered over the cable, nothing happens. As soon as the vehicle moves to either side, one signal increases in intensity while the other decreases, causing a response in the receiver. In the ultimate system, this would be used for automatic control of the steering mechanism.

Perhaps the most telling point of the demonstration in the eyes of highway experts was the extent to which the electronic system is compatible with present highway conditions, having many applications in the near future without requiring any equipment in cars.

The point was demonstrated simply. As cars entered the test strip, a warning light automatically flashed on over a merging-traffic sign 400 feet ahead, alerting drivers approaching on an adjacent road. Then, as each car moved over the buried loops, a light beside each loop turned on automatically, tracing the passage of the car through the test area.

Doctor Vladimir K. Zworvkin of RCA pointed out that the use of lights along the roadside could provide a visual substitute for the “radio tail warning,” serving vehicles without any receiving equipment. In this way, a vehicle moving along in the fog might turn on a series of lights several hundred feet behind it, warning approaching cars and immediately preventing rear-end collisions in fog banks—a type of accident that has involved as many as 30 cars at once on the New Jersey Turnpike.

How would the new lighting sys- tem be introduced? Probably in three stages, as follows: • First stage: No auxiliary equipment in vehicles, but systems of warning lights activated by the buried detector units. This could be done immediately, perhaps beginning with isolated portions of the highway system.

• Second stage: Some cars equipped with signal detectors which would give the driver a dashboard indication of the distance of clear roadway ahead, even under zero visibility.

• Final stages: Automatic vehicle control would also be introduced on a step-bv-step basis, beginning with installed equipment that would make use of signals from the guidance cable and buried antenna systems to control steering and braking.

Ultimately, automatic control devices would sense suitable opportunities for passing and would change routes in response to a program preset on an electronic computer in the vehicle. The driver would have to take over only as he left the highspeed road system.