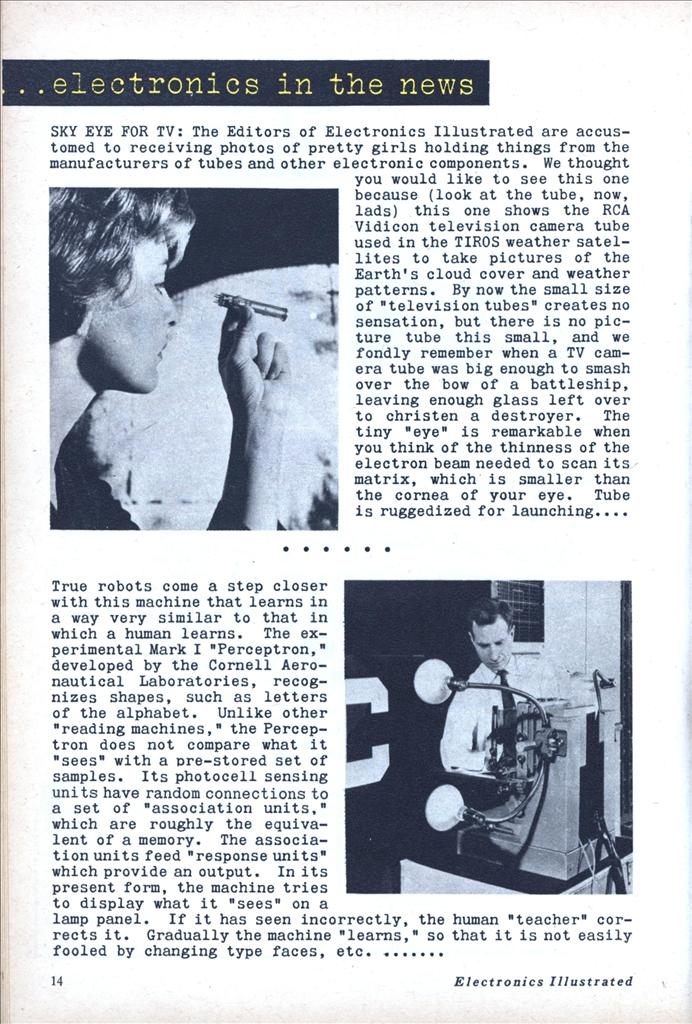 you would like to see this one because (look at the tube, now, lads) this one shows the RCA Vidicon television camera tube used in the TIROS weather satellites to take pictures of the Earth’s cloud cover and weather patterns. By now the small size of “television tubes” creates no sensation, but there is no picture tube this small, and we fondly remember when a TV camera tube was big enough to smash over the bow of a battleship, leaving enough glass left over to christen a destroyer. The tiny “eye” is remarkable when you think of the thinness of the electron beam needed to scan its matrix, which is smaller than the cornea of your eye. Tube is ruggedized for launching….

True robots come a step closer with this machine that learns in a way very similar to that in which a human learns. The experimental Mark I “Perceptron,” developed by the Cornell Aeronautical Laboratories, recognizes shapes, such as letters of the alphabet. Unlike other “reading machines,” the Perceptron does not compare what it “sees” with a ore-stored set of samples. Its photocell sensing units have random connections to a set of “association units,” which are roughly the equivalent of a memory. The association units feed “response units” which provide an output. In its present form, the machine tries to display what it “sees” on a lamp panel. If it has seen incorrectly, the human “teacher” corrects it. Gradually the machine “learns,” so that it is not easily fooled by changing type faces, etc.