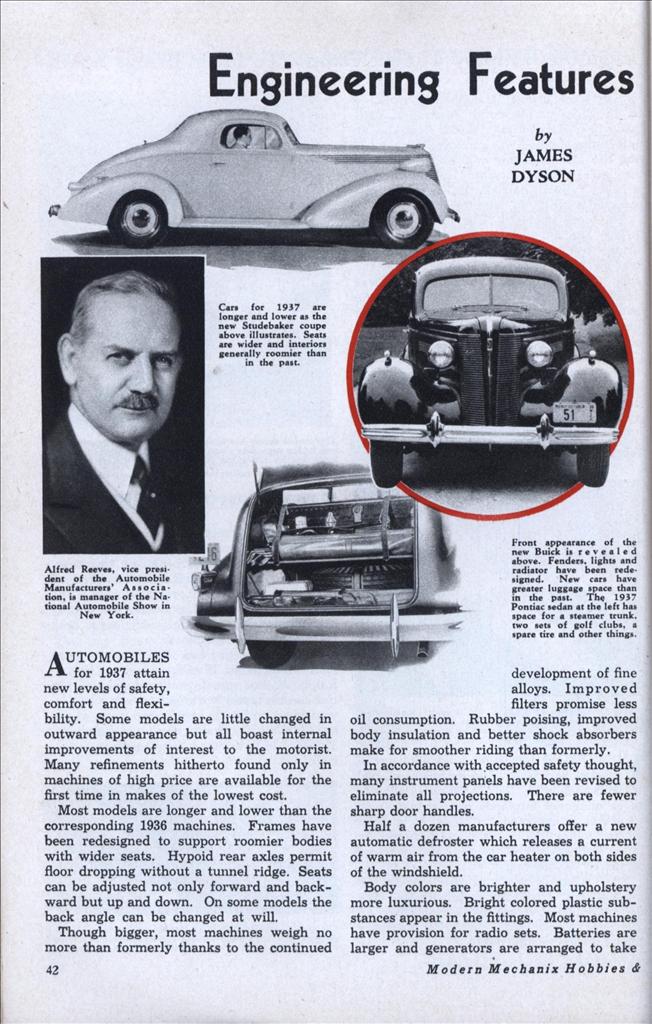 AUTOMOBILES for 1937 attain new levels of safety, comfort and flexibility. Some models are little changed in outward appearance but all boast internal improvements of interest to the motorist. Many refinements hitherto found only in machines of high price are available for the first time in makes of the lowest cost.

Most models are longer and lower than the corresponding 1936 machines. Frames have been redesigned to support roomier bodies with wider seats. Hypoid rear axles permit floor dropping without a tunnel ridge. Seats can be adjusted not only forward and backward but up and down. On some models the back angle can be changed at will.

In accordance with accepted safety thought, many instrument panels have been revised to eliminate all projections. There are fewer sharp door handles.

Half a dozen manufacturers offer a new automatic defroster which releases a current of warm air from the car heater on both sides of the windshield.

Body colors are brighter and upholstery more luxurious. Bright colored plastic substances appear in the fittings. Most machines have provision for radio sets. Batteries are larger and generators are arranged to take care of the increasing numbers of accessories requiring electricity.

Chevrolet offers a new and improved steel body. Ford has an array of comfort and economy features but withheld announcement for the National Automobile Show opening in the Grand Central Palace in New York on Armistice Day.

Packard and Chrysler are offering new models in the lower priced fields. The former has a new “Six” and the latter the “Royal,” also a six-cylinder machine. The Packard Six has a wheelbase of 115 inches and resembles the larger 120 which is con- tinued with improvements. The Royal has a 93-horsepower engine, with 228-inch cubic piston displacement and the high compression ratio of 6.5 to 1. The engine, however, is lighter than the previous Chrysler Six. The car is roomier and has the hypoid rear axle.

The hypoid rear axle, permitting removal of the driveshaft tunnel in the rear compartment, is also a feature of the new Plymouth. Hypoid design permits a lower propeller shaft and uses longer and stronger gear teeth. For this Plymouth uses amola steel.

Other features include a larger body, with cowl, windshield posts, steel roof and back panel all formed in a single solid unit; a safety interior swept free of projections; rubber outrigger support for the body and insulation against weather and noise; built-in defrosting and anti-fog vents at the base of the windshield. The streamlining is greater and the overall length has been increased to 194 inches on all models.

Floors have been lowered three inches in rear and two inches in front compartments with elimination of foot-catching tunnels for transmission. The emergency brake lever has been moved from the right to the left of the driver under the cowl providing more space. Provision is made for a built-in windshield defroster. Visibility has been improved by making the windshield two inches wider and higher and increasing its angle of slant from 31 to 39 degrees.

A new double-drop “X” type structurally rigid frame of cantilever construction is embodied in the Pontiac chassis. A change has been made to open type front wheel knee action units with the promise of more com- fortable riding and easier steering around corners. A slight change in the manifold intake makes combustion more efficient. Buick styling is new for 1937 and all models have been stepped up in horsepower with improvements in acceleration and general performance. A mark of 19 miles per gallon at 30 m.p.h. is claimed for the Series 40 cars powered by a 100-horsepower valve-in-head straight eight engine.

This engine has been stepped up from 93-horsepower by an increase of 1/4 inch in stroke, boosting displacement to 248 cubic inches, adoption of streamline intake valves, a new exhaust system which increased back pressure, and an increase in compression ratio from 5.65 to 5.70 to 1. Horsepower of the bigger Buick engine has been increased from 120 to 130. Specifications are: valve-in-head, 8 cylinders in line, 3-7/16 bore by 4-5/16 stroke, 320.2 cubic inches displacement with a compression ratio of 5.75 instead of 5.45 to 1.

Buicks have a new Aerobat, double float, single bowl, down draft carburetor which it is said will assure positive fuel feed independent of acceleration, steep grades or fast turns. The automatic choke has been re-designed to provide automatic deflooding. All models have automatic idle control. Series 40 and 60 models have a new frame using diagonal cross members. An improved heavy duty generator is a feature. Running boards are designed as radio antenna.

Exterior changes give a racy, bullet-like effect. The radiator grille is die-cast in two pieces with horizontal bars rising to the hood line. The hood top line and color are carried down through the middle of the grille. Bullet-shaped headlamps are molded directly into the radiator shell. Automatic windshield defrosters are available. Overall height has been dropped one inch and the floors lowered two and a half inches to provide greater head room. Both seats are wider.

New Hudson and Terraplane models are lower, longer and roomier than in the past. A new selective automatic shift transmission for use with the Electric Hand, continued as an optional extra as at present, is offered. Another optional feature is a hydraulic hill-hold device which prevents backing of the car when stopping on a hill. This device is operated by the same fluid used to apply the hydraulic brakes. The clutch pedal is interconnected with a valve through which the brake fluid passes in the application of the hydraulic brakes. This valve prevents the return of the brake fluid until the clutch is depressed, thus keeping the brakes applied until the gear change has been made and the operator is ready to drive the car forward up the hill.

An innovation in both cars is the mounting of the battery under the left front fender where it can be reached by raising the hood. A ventilating arrangement keeps the battery from being affected by engine heat. A slight change has been made in the Electric Hand, now two years old. For 1937, the reverse gate, instead of being just ahead of the low speed slot, is to the side. Previously it has been necessary to lift the shifter trigger when going into reverse.

With the new device in use with the hand controls, the cars can be driven without the use of the left foot.

Though displacement, bore and stroke remain the same, improved carburetion and manifolding have increased the horsepower from 88 to 96 on the DeLuxe model and 101 on the Super-Terra-plane. Horsepower of the six-cylinder Hudson engine has been increased from 93 to 101 horsepower and that of the eight-cylinder engine from 113 to 122 horsepower. The makers claim a 10 per cent improvement in gasoline economy.

Graham offers three lines, two of them with supercharged engines, for 1937. Interior treatment follows a design created by Norman Bel Geddes. A center panel section of the steel roof is insulated to serve as a radio aerial. Provision is made for a windshield defroster.

An improved drive has been developed for the supercharger. The rotor now is driven from the crankshaft at 5.75 times engine speed by twin “V” belts. Turning at approximately 23,000 revolutions per minute when the engine is turning 4,000, the supercharger takes the carburetor mixture, scrubs it to a fine mist, brings it to engine temperature and packs it evenly into all cylinders at five pounds above atmospheric pressure.

De Sotos have a new high compression engine which is said to develop 93 horsepower with unusual economy in fuel consumption. It has full length water jackets, aluminum alloy pistons, floating power, new U-shaped piston slots and automatic choke. The car has an overall length of 199 inches. The hood, stamped out of one piece, is hinged at the rear and opens from the front.

The new design eliminates the cat-walk between the fenders and the hood. Headlights are larger. Defroster vents are built into the top of the instrument panel at either end. Rubber-float body mountings at 14 points insulate the body from road noise.

Chassis improvements mark the new Studebaker Dictator and President lines. The President has a new overdrive transmission which is automatically selective. It may be cut in or out at any speed above 35 miles per hour. To cut in the overdrive, the foot is lifted from the accelerator and applied gradually. To cut it out, the foot is applied quickly. Both models have an improved gear shift, hypoid rear axle gears, double drop frame, improved automatic choke and Fram oil and motor cleaners. It is claimed that the last feature will reduce the necessity of changing oil to the seasons if the Fram cartridge is changed when the oil becomes dirty.

The parking brake lever has been removed from the floor, placed at the driver’s left and suspended beneath the cowl. The 18-gallon gasoline tanks have been flattened out to give space to tools beneath a larger luggage compartment at the rear. There is a new twin lever steering gear.